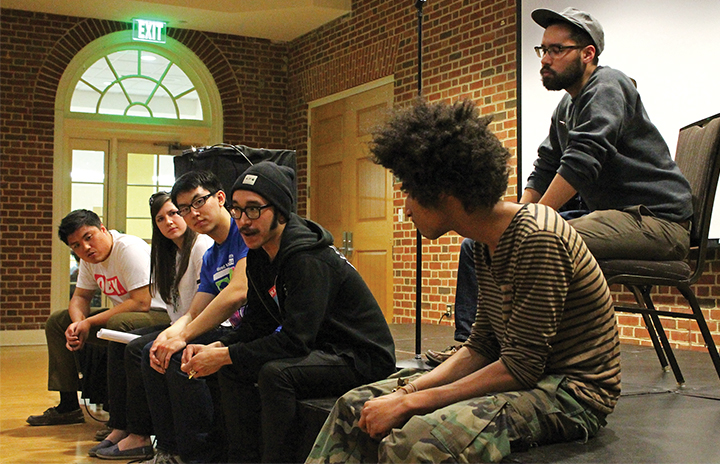 In a dim room full of spectators with a single microphone standing in the middle of the stage, Vincent Chen presented an original poem using spoken word for the first time.

“Anyone who knows me knows that this is the last thing that they expect me to be doing,” Chen said to the crowd.

The senior computer science major was one of several students who performed at Stamp Student Union last night at the Mixed Monologues: Open Mic event. As part of the university’s Mixed Madness Month, hosted by the Office of Multicultural Involvement & Community Advocacy, students from EDCP 498: TOTUS Spoken Word Experience and the Multiracial Biracial Student Association sponsored the event.

With the theme “________ Looks Like Me” incorporated into the month, Naliyah Kaya, coordinator for multicultural student involvement and advocacy, said the students in the multicultural and multiracial community wanted to transcend visual stereotypes.

Different from other monologue series featured on the campus, such as the Vagina, Muslim and Black monologues, this event was about giving students, many of whom had never presented their work before an audience, an opportunity to share their identities, Kaya said.

“They don’t always have the incorporation of an open mic where folks can go and share their own personal stories at the end, so we hope to give them both,” she said.

Throughout the event, the organizers passed a clipboard around the crowd and offered everyone a chance to write a verse or two to contribute to the “community poem,” read at the end of the evening.

Carrie Wolford, MBSA communications assistant vice president and senior English major, said this is “just what MBSA needed,” as all monologue events provide a chance to educate people about issues while giving them a voice. Sometimes, the mixed-race and multicultural community doesn’t have a loud voice within society, she said, and often it is not recognized as a group.

“It’s definitely broadened my horizons and allowed me to think about race and people in many different ways,” she said. “Before, I didn’t really think of race as being an issue.”

Shani Banks, a junior psychology major and former student in the poetry class, unexpectedly presented a poem she wrote after attending the event as a spectator.

“I just came out here to listen and to support,” Banks said. “After watching it and hearing their stories, I was inspired to do the same.”

Events like this one also help Wolford communicate with people “in ways that [she] might not be comfortable” with, she said.

“We’re right in the middle of Stamp. Even if people didn’t know about it, if they’re walking through Stamp and it happens to be something that relates to them, or just they’re intrigued, they will come in,” Wolford said.

The event’s featured performer, Chantz Erolin, is a rapper and poet from Minneapolis who rapped about “mixedness” and “identity politics,” expressing his own identity through his work as well.

Kaya also said she felt the need to make a change, so this semester,  she started a class to incorporate more leadership within the multicultural community — EDCP 418K: Leadership and Intersecting Identities: Stories of the MULTI racial/ethnic/cultural Experience.

Before the class opened and the MBSA took off, there wasn’t a place where multiracial and multicultural groups could have “consistency” or address issues important to them, Kaya said. When the class opened, she said, it filled up immediately.

“This is a topic that students want to talk about,” Kaya said. “There’s something going on here that they feel a need to have a multiracial leadership course.”

People should no longer feel the need to hide behind or try to explain an identifier, as there is a community in which people can just be themselves, Kaya said.

The open mic event reinforced this type of environment, getting rid of the quick judgments and questions like “What are you?” and “You don’t look like [a certain background],” Kaya said.