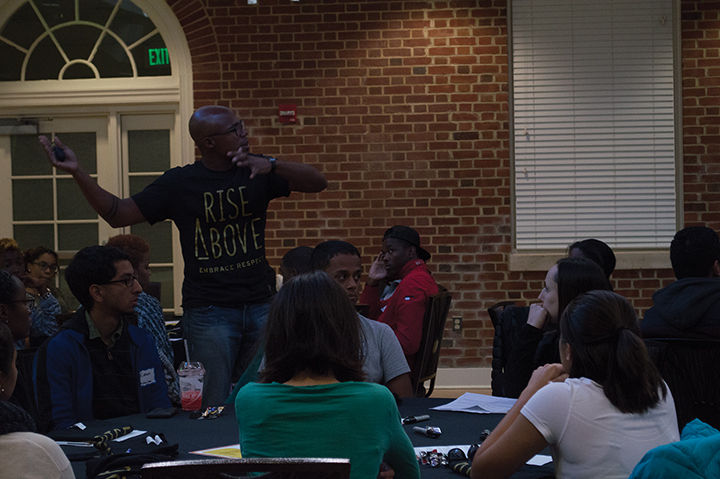 Domonic Rollins, a doctoral student at the University of Maryland in the Higher Education, Student Affairs, and International Education Policy program, leads the discussion about exclusivity on campus and how to respond to it through positive action.

Domonic Rollins, a doctoral student at the University of Maryland in the Higher Education, Student Affairs, and International Education Policy program, leads the discussion about exclusivity on campus and how to respond to it through positive action.

Senior Johanna DeGuzman said students have asked her for help with math homework and whether she can see properly because of the size of her eyes.

While people usually make these kinds of comments as a joke, they can make a person uncomfortable and self-conscious about his or her identity, said DeGuzman, a communication major of Asian heritage.

“Contrary to belief, I’m very bad at math,” she said. “It’s not something that you think is offensive, but someone could take it the wrong way.”

DeGuzman, the Student Government Association’s director of diversity and inclusion, helped facilitate a discussion Monday aimed at combatting these microagressions and other excluding behaviors as part of the University of Maryland’s third annual Rise Above “-isms” week.

More than 100 students, staff and faculty attended the Office of Diversity and Inclusion’s “I Too Am Maryland” program, led by Domonic Rollins, an education and training specialist with the office. The event was meant to encourage the university community to think about how its behavior might be exclusive and how it can take steps to include others, Director of Education and Training Beth Douthirt-Cohen said.

Microagressions are subtle remarks or statements that maintain exclusion of marginalized or minority populations, Douthirt-Cohen said. When asked repeatedly, questions such as “Where are you from?” or “What’s your ethnicity?” communicate that a person of color is an outsider, she said.

Microagressions can apply to all dimensions of identity and difference, including race, gender, sexual orientation, socioeconomic status and religion, Douthirt-Cohen said.

“We call them ‘micro,’ but actually over time they have a huge impact on how people feel like they belong or don’t belong on campus,” she said. “There are still overtly hostile ways that we exclude people … but what is more common and what we definitely hear on this campus from marginalized and minoritized people is it’s those questions or those slights.”

This campus might be one of the most diverse communities some students have ever been a part of, Douthirt-Cohen said, so they might not be aware of their own biases or how they affect others.

During Monday’s event, attendees introduced themselves to small groups and shared their preferred pronouns and a significant aspect of their identity. They also discussed times they have felt excluded from certain communities and times they have excluded others.

When people experience exclusive behavior, Rollins said they should pause to assess the situation, focus on the action rather than the person committing the action and remember the goal is to educate others, not to win the argument.

As one of a few minorities in her living and learning program, sophomore Ja’Nya Banks said other students in her dorm sometimes would give her strange looks for the way she did her hair or the type of music she listened to.

Banks, a special education major, attended last year’s “I Too Am Maryland” discussion, which focused specifically on racial microagressions. She said it comforted her that other students deal with similar experiences.

“We spend so much time kind of self-segregating occasionally that we forget to involve others,” she said. “We want people to appreciate us, our cultures, our groups, our differences, but we don’t know how to engage with them, or if something negative happens, we don’t know how to address that.”

“That doesn’t make them a bad person,” she said, “but they need to change the way they act, because it’s not right.”

“The people here today said, ‘I want to have the conversation. I want to engage. This matters to me,’” Rollins said. “It doesn’t have to stop here.”