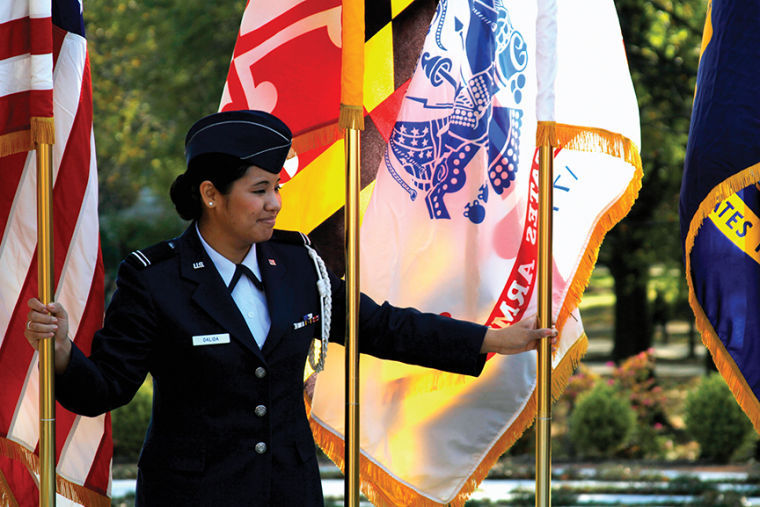 EDITOR’S NOTE: A student’s name has been withheld to protect her status as a cadet.

Despite her family’s proud history of serving in the Army, junior Kaitlin Tullis never felt any pressure to follow the same path.

The linguistics major, born overseas on an Army post, didn’t even consider the idea until her senior year of high school. In college, she joined the ROTC and began training with the goal of becoming a chaplain in the Army. And while women’s roles in the military have traditionally been noncombative, others like Tullis could now find themselves at the center of the action after U.S. Defense Secretary Leon Panetta announced last week the military would lift a ban on women in direct combat roles — a policy change some said will enable more women to advance their military careers.

The decision overturns the 1994 Pentagon policy restricting women from fighting on the ground in units such as infantry, armor and artillery. Now, the military’s more than 230,000 combat positions could be opened to women, giving them the opportunity to fight alongside male soldiers in small combat units below the brigade level.

“It’s a generally accepted feeling in the Army that in order to get promoted to the highest levels of service, officers need to have served in combat,” said Mike Johnson, an Army ROTC spokesman.

University ROTC programs are not expected to be impacted by the policy changes, Johnson said.

“We’re still going to recruit the same type of kids, and the program and instruction is not going to change,” he said.

And while the minimum physical fitness standards required for ROTC eligibility differ between men and women, standards for combat roles likely will not be lowered to accommodate women, said Mady Segal, a sociology professor whose research focuses on military personnel issues.

“Standards will have to be systematically valid as required for the job,” Segal said. “Military training will be aimed at enabling qualified service members to succeed.”

Women have demonstrated their abilities in recent years, with some serving in offensive combat positions as fighter pilots, on Navy ships or in combat support jobs on the ground, she said. Alumna Mariya Golotyuk was named the top U.S. Army ROTC cadet in 2011.

“Last year, she couldn’t have gone into the infantry if she wanted to,” Tullis said. “There are a lot of females who can do incredible things.”

It shouldn’t matter if it’s a man or woman shooting next to you, Tullis said, as long as they can carry out their duties.

“If you get injured, you want someone who will be able to carry you,” she added. “If a woman can’t carry a man on her back, then she shouldn’t be there.”

Though Jane — whose name has been changed to protect her status as a cadet — doesn’t see herself working in combat, she said some female ROTC cadets are as strong as their male peers.

“I don’t think women are any less capable — my squad leader could kick the butts of any guy out there,” Jane said.

Women in combat roles could bring a new perspective to solving issues, she added, because they have a different style of leadership — men focus more on “getting things done efficiently,” while a woman may place more emphasis on the end goal and how things can be improved.

Sam Metz, a junior biology major and ROTC cadet, had only one concern — that the military could develop a double standard for physical ability among men and women in combat.

“The front lines of an armed conflict are life and death, and what it really comes down to is if you’re out there and get hit, you absolutely need to rely on the men or women out there with you to be able to come to your aid — including picking you, and the potentially 80-plus pounds of equipment on you, up — and moving you out of the line of fire,” Metz said. “As someone who wants to branch into a combat arms branch, it’s important to me to know that training standards for any set of individuals won’t be relaxed due to some misplaced sense of political correctness.”

However, the recent policy change represents significant strides toward gender equality within the military, Metz said, adding it alleviates the idea that the Army is old-fashioned or backward and should boost the rate at which women gain top military positions.

But there is still work to be done — Jane said sexual harassment continues to be an issue, though the topic is addressed with cadets during training.

“It seems like people are becoming more open-minded now,” Jane said. “As we progress through the ranks, the overall opinion toward women might change.”

Advancement must occur at every level of military organizations, Segal said, adding leaders must “publicly and privately speak and behave in support of fairness.”

But the overall attitude toward women is changing for the better, Tullis said.

“Some people say women are too soft. But we’re all warriors. We’re all together in training,” she said. “As long as the standards are upheld, [women] can still be an asset to battle.”