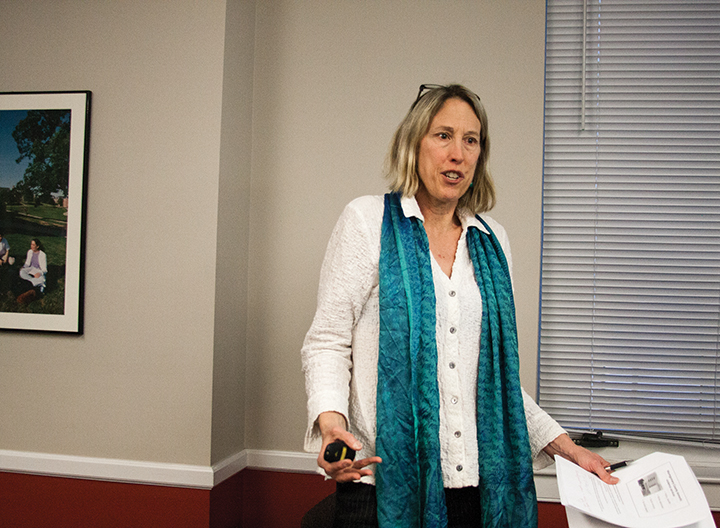 When Laurie Duker first began her work with the Montgomery County District Court, she was just a volunteer. But after becoming a victim advocate for the social services system, Duker couldn’t believe the issues she continuously witnessed.

System inadequacies inspired Duker to become more involved. Now, she is the executive director of Court Watch Montgomery, a nonprofit organization that works to analyze and help improve the experiences of domestic-violence victims within the Montgomery County court system. She spoketo a small crowd in South Campus Commons 1 on Monday night about her work.

Duker cited inefficiency, “condescending” judges and a disregard for victims’ safety as some of the problems in the Montgomery County Court.

“It was a really bad situation by the time I got there, and everyone was treating it as if it was normal,” she said.

Court Watch began in 2011 with 15 trained and supervised volunteers, and within six months, those volunteers examined 680 cases in Montgomery County District Court, focusing on protective orders for domestic violence victims.

“The very first day we walked in, there were changes,” Duker said.

The court used the first report to get more bailiffs to monitor the courtrooms and halls to protect victims from their abusers in the courthouse. The court also implemented a policy allowing victims to leave the courthouse before their abusers to ensure that the victims safely make it to their transportation, Duker said.

While judges are not named in the reports, they are analyzed specifically and identified by letters, and so far, they have met with the head judge following the reports’ release to assess their work and behavior in the courtroom.

Duker attributed the organization’s success in improving the courts’ operations to “powered data and powered stories.”

Court Watch has 80 to 100 sources for each of its reports and back up      everything carefully, Duker said. The organization tells the stories of some of the victims it encounters in order to raise awareness of domestic violence.

Court Watch also aims to highlight successes in the system, something that has helped the organization accomplish its goals, Duker said.

“We tried to catch judges doing things well, too, which really added to the credibility,” she said.

Duker discussed the uphill battles her organization continues to face. One issue that persists is judges failing to consistently mention  that it is a crime to violate a protective order, a simple decision Duker said could act as a deterrent for respondents in domestic violence cases.

The percentage of judges who mention this in court has increased since Court Watch’s first report, Duker said, but not where it needs to be.

About 20 to 40 percent of domestic violence cases are dismissed, Duker said. This happens because women are scared or unsure of whether they have enough “clear and convincing” evidence, a standard required by state law.

The women who actually come into court to announce their decision to drop their request for a protective order give judges the opportunity to question their decision to ensure that they are not being coerced or threatened in any way, Duker said.

“It’s depressing if you can’t change stuff, but when you can, it’s pretty exciting,” she said.

While there is still work to do, Duker said, Court Watch has become a model for many other court systems in the country.

Junior biology major Cynthia Ezedike said she was surprised at how big an issue domestic violence remains, and she was inspired by how much Duker has been able to accomplish in Montgomery County.

Tariq Jah, a junior cell biology and genetics major, has had personal experience with domestic violence and said he didn’t see something like Court Watch in Prince George’s County, where he lives.

“This work should be in other counties as well,” Jah said. “Maybe I’ll talk to my mom about starting something like this.”