Q&A: NCAA president Mark Emmert sits down with The Diamondback 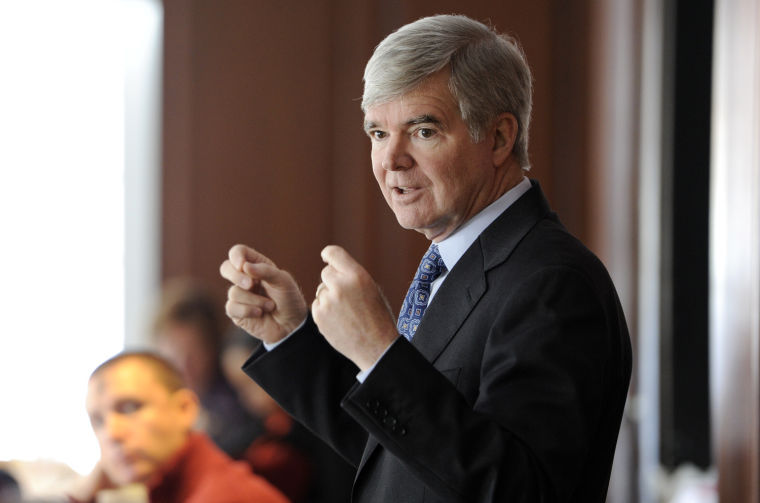 In the middle of speaking with Prince George’s County business and civic leaders about the NCAA’s new academic eligibility standards and meeting student-athletes, NCAA President Mark Emmert sat down with The Diamondback to answer a few questions.

Here, he gives his thoughts on the university’s move to the Big Ten, the debate surrounding paying student-athletes, upcoming structural changes to the NCAA and some of the biggest challenges that lay ahead.

Diamondback: What are your thoughts on Maryland’s move to the Big Ten and conference realignment in general?

Mark Emmert: For Maryland, it makes good sense because of the stature of the Big Ten, especially in football and other areas, so I think it will work well for the institution. The ACC is already spread out geographically so Maryland doesn’t really have a much bigger footprint. The only issue the NCAA has had is the impact on student-athletes themselves. Is this going to make their lives better or worse? For Maryland I think it’s fine.

DBK: Maryland’s move was controversial with a violation of the Open Meetings Act and sequentially being left out of ACC meetings. Do you worry about schools doing whatever it takes to benefit themselves and the animosity that results?

ME: Just as Congress gets into gridlock and starts throwing rocks at each other, you can have the same thing in sports. We don’t need that right now. We need everybody to work together. I hope whatever animosity that’s been created can be overcome. Whatever the issues are, they’ll dissipate, but I do worry about the animosity and angst that all this has created. It’ll go away but it’s going to take some time.

DBK: How will we see the NCAA change over the next few months and years?

ME: In the next few months we’re going to see a set of changes that will be largely invisible to people outside but will be very meaningful and that’s involving the way Division I governs itself. … We’re trying to find a model that would allow the five big-budget conferences [ACC, Big Ten, SEC, Pac-12, Big 12] to make some of those decisions on their own without having to have the 27 other conferences involved.

DBK: Will there be any discussion about paying student-athletes?

ME: There’s not going to be discussion about moving student-athletes into employee status. Right now, we have a debate going on at Northwestern University — the football team has filed with the United Steel Workers to become unionized. For that to happen, they have to be employees. There’s no one in intercollegiate athletics that thinks having students be converted into employees who play games is a good idea. That’s not being debated.

In terms of making sure there’s the right balance between giving student-athletes the resources they need, whether that’s financial, or time, or academic support or changing the nature of scholarship support, all those things will be very actively debated.

DBK: How do you think raising eligibility standards (from a 2.0 grade point average to 2.3 in 2016) will change recruiting?

ME: I hope only positively. When the 2.0 was put in place about 10 years ago, there was concern that not everybody could meet that standard but, lo and behold, everybody did. It was a challenge, but they got there. We’re hopeful and pretty confident that student-athletes are a pretty competitive lot, that if you tell them you have to get to this level, that they’ll get there. That’s why we’re communicating to freshmen and sophomores now that this is the target — start working hard.

DBK: What’s the most difficult issue for the NCAA?

ME: It’s been the attention to college sport that’s been a blessing and a curse. The blessing is obvious: Athletes love to play on TV in front of a big audience and be part of the energy of college sport. What that has driven is much greater interest in television media rights, and that in turn has driven big budgets and those big budgets have allowed the creation of new academic centers and gyms and stadiums and that’s all fun and good, but it’s also created a lot more pressure on athletic departments to generate even more money.

That’s changed a lot and created a lot of anxiety, and that’s problematic. You’re still watching the same games and it’s still exciting, but it’s gotten entangled in the economics.

The biggest challenges are the changes I just talked about. Can we put in place a decision-making model that allows the NCAA to make decisions faster, that allows them to address the real issues of students, that allows them to be as open and transparent in those processes as they can so the public at large has a better understanding of who we are and what we do? That’s a huge hill to climb for the association.