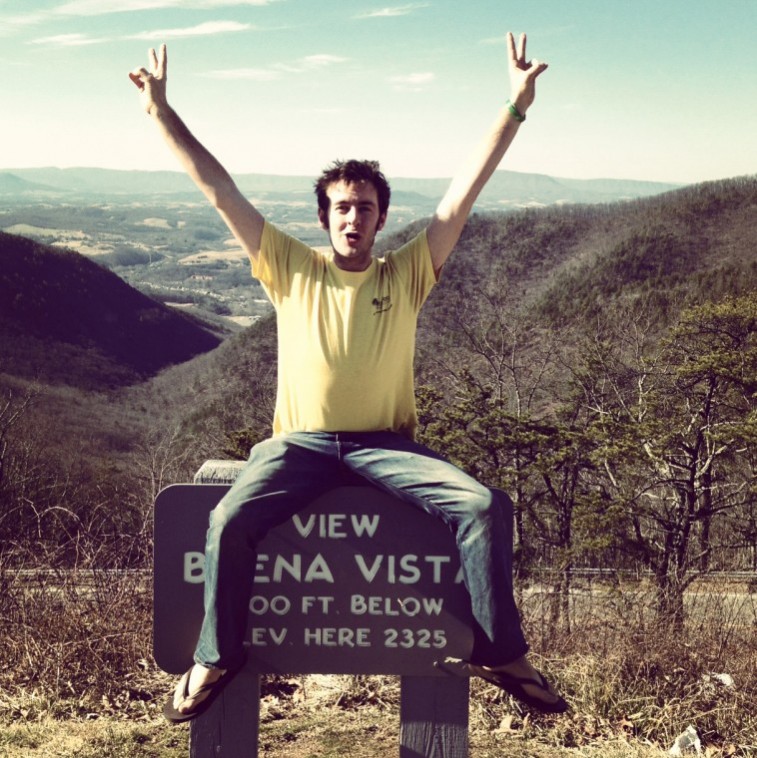 Chip Hiden (above) and Alexis Irvin inspire students to follow their dreams with a documentary about their experiences.

Chip Hiden (above) and Alexis Irvin inspire students to follow their dreams with a documentary about their experiences.

In 2009, Alexis Irvin thought she was living her dream.

Her high school best friend had become her college sweetheart. She had survived the “boot camp” classes of this university’s journalism school and emerged with a degree in hand. Her political interests gave way to a job doing office work for the federal government soon after graduation. Check, check and check.

But something was missing. She and boyfriend Chip Hiden both began to feel it: that lack of passion, the absence of any drive to get up and go to workplaces that left them uninspired.

Fifteen thousand miles, three months and an alligator scare later, Irvin and Hiden had interviewed more than 30 people about how they were living out their dreams. Their hour-long documentary, The Dream Share Project, has screened at more than 50 universities and will premiere on the campus in Hoff Theater tonight. (Spoiler alert: One scene involves the pair writing on a chalkboard in Jimenez Hall.) Afterward, the couple will hold a workshop to help participants further analyze their dreams and figure out how to translate them into reality.

They should know; they’re doing it themselves.

The ultimate road trip began on Aug. 27, 2010, after a year spent choosing stopping points, saving money and gathering the courage needed to leave their safe, comfortable jobs. A tent became their bedroom, rice and beans their main form of sustenance.

“We decided to take this leap of faith with no idea where it would lead,” Hiden said. “We planned out everything as best we could, trusted in our ideas and that they would lead to a good place.”

Irvin and Hiden knew simply running away wasn’t going to help them. To make it worthwhile, they scoured local blogs, newspapers, magazines — anything that would help them find people who knew the secret to happiness.

These ranged from the obscure (a University of Iowa student originally from Swaziland who sells specially seasoned corn on the cob and plans to patent his grandmother’s hot sauce) to the athletic (an Olympic skier) to the celebrity (Louis Black, the founder of the South by Southwest Festival in Austin, Texas).

One of the couple’s favorites was Kyle Berner, who worked at a record label and at Dell before managing hot dog stands. After all these endeavors proved unfulfilling, a backpacker who raved about Thailand inspired him to sell his car and buy a one-way ticket. While in the country, Berner stumbled across flip-flops made from natural, biodegradable Thai rubber. He wrangled a deal with the supplier to make himself the only American distributor of the flip-flops and called his company “Feelgoodz.”

“I found that the microeconomy in Southeast Asia was built off of rubber farmers,” Berner said. “I fell in love with the sort of social economic impact of being able to distribute high quality products that also had this added value to society as a whole.”

Berner now refers to his products as “conscious footwear” and sells them mostly in Whole Foods, as well as a store he’s opened in Raleigh, N.C., called The Treehouse. He said the company doubles its distribution almost every year.

“It was challenging, no question,” he said, laughing. “I, like several other million people in their 20s, lived off ramen and peanut butter sandwiches for years, but I was finding my way.”

Crystal Sehlke heard about Irvin and Hiden’s program through a friend at Salisbury University. As the program director for the University Career Center and The President’s Promise, Sehlke is always on the lookout for innovative ways to show students how their dreams can turn into jobs. The Dream Share Project fit that bill perfectly.

“This shows them that you don’t have to pick a title off a shelf,” she said. “It’s something they can see.”

Sehlke was able to bring Irvin and Hiden to the campus through generous grants from the Pepsi Enhancement Fund and the Hoff Funding Board. In fact, she received so much money that she’s organized a competition among the student groups on the campus: The group that sends the most volunteers to the screening and workshop will receive $200, and all other groups that attend enter into a drawing to win another $200. As of Tuesday morning, Sehlke said 19 groups were registered, which totals about 250 people.

In addition, Sehlke said 60 other students plan to attend The Dream Share Project screening, and she expects about 200 more to come with their UNIV 100 classes, with which she’s been working. Her planning process for the event began in February.

She and Hiden have committed themselves full-time to this job; this campus is the first stop on their fall tour, which will wind through New England on the way to at least 29 other schools. They’ve created an online course guiding prospective dreamers through podcasts and exercises at a cost of $25. A book proposal for The Dream Share Project was just finalized.

Yet both Irvin and Hiden have written scripts, and Irvin has some short stories and fiction in the works. Neither is giving up on former interests, but both have finally found a source of inspiration.

“I think my dreams are evolving,” Irvin said. “We love going to colleges and sharing the movie with other people, especially when somebody two or three years younger than us says it’s so great to hear this advice. I really believe that when you’re pursuing any kind of goal, once you start going after one thing, that kind of persistence and determination will start to go into other areas as well.”

Ocean Robbins is the founder of YES!, a nonprofit organization that motivates the younger generation to focus on solving global problems. Irvin and Hiden interviewed him while in Santa Cruz, Calif. Robbins participated in the project because of the “chutzpah” the couple displayed by taking such a big risk.

“I don’t think anything really worthwhile in life has as its first priority that it be easy, whether it’s parenting a child or launching a business or making a difference in somebody’s life, it usually takes muscle as well as love to get something done in this world,” he said. “But when we combine the best insights and minds we can bring forth with our muscles and our love, sometimes amazing things can happen.”