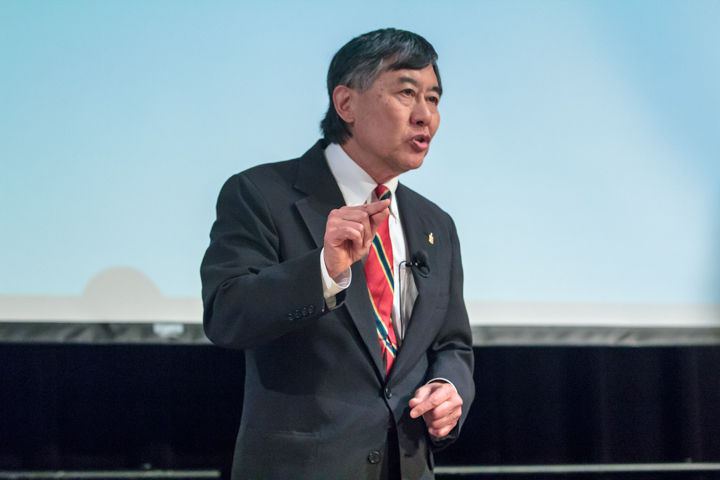 In the wake of campus protests across the country, University of Maryland President Wallace Loh wrote that “academic freedom and racial justice” need to be reconciled throughout campuses to promote understanding among diverse student bodies.

The column, published on Time.com and sent to the campus community Monday night, emphasized that this seeming “clash of ideas” actually strengthens institutions of higher learning and contributes to the nation’s progress.

“A university is a marketplace of ideas,” Loh wrote in the column. “Spirited debate is essential to the pursuit of knowledge and truth. Students should learn the importance of openly and vigorously contesting ideas they oppose rather than seeking their suppression. They must develop strong resilience to offensive speech and attacks on their identity.”

Tim Wolfe, the University of Missouri System president, stepped down last week in the midst of student protests and calls for his resignation. Students at this university rallied Thursday in solidarity with the protests in Missouri.

Concerned Student 1950, an organization named for the year the University of Missouri admitted its first black student, submitted a list of demands, sparked by a number of racial incidents on the university campus. One graduate student, Jonathan Butler, went on a seven-day hunger strike. Some members of the university’s football team also threatened to boycott all football-related activities unless Wolfe resigned or was fired.

At Yale, tensions turned to protest also after a debate over political correctness as it relates to Halloween costumes and one university professor’s comment that campuses were becoming places of “censure and prohibition.” Minority students say the school is not “attuned to their needs” and raised allegations of a “white girls only” sign at a fraternity party, the Associated Press reported.

This university faced turmoil last March when an email written in January 2014 by a former Kappa Sigma fraternity member sparked protests at this university. The email included racist and sexist language, as well as the phrase “f— consent.”

Many students called for the author of the email’s immediate expulsion, but a university investigation found his words were protected by the First Amendment and not in direct violation of university policy.

In response to the issue, the university announced the creation of a multicultural student advisory group to discuss diversity issues, as well as mandatory training programs on sexual assault prevention, multicultural competency, hazing prevention and drug and alcohol education by the Department of Fraternity & Sorority Life for its members.

In his column Loh addressed the email, highlighting it as an example of the conversations taking place at college campuses across the nation and described the importance of creating an environment where people feel “safe enough to speak freely.”

College students’ “pursuit of justice” requires universities to respond, not only to immediate demands, but also to confront the deeper problems causing these issues, Loh wrote in the column.

“We have a responsibility to address the underlying conditions that give rise to legitimate grievances and the calls to suppress offensive speech,” he wrote. “It is at times like these when our nation’s colleges and universities become so indispensable. They are the places where the struggle for progress should take place.”