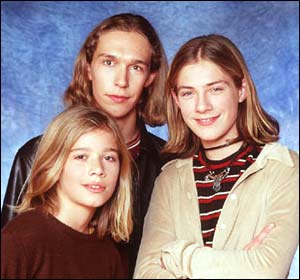 Walking into a party, you prepare yourself for the forced small talk and witty banter that awaits. With a stranger to your right, you shuffle through the social cues of “Do you like this Selena Gomez song?” and “What’s your major?” over a warm Natty Light.

Not too far behind that first awkward pause, the stranger will ask you, “What’s your favorite band?” You could easily answer this very personal question with Mumford and Sons, Maroon 5, or even an artist like Taylor Swift. All of those answers would suffice.

Yes, that 90s brother band that forced the non-word “MMMBop” into American culture. I swear I’m not stuck in the 90s and that I really do have decent taste in music. But Hanson is just too great to forget.

Here are the five reasons why I love Hanson. You won’t hear it at a party because you already walked away.

5. They have exceptional hair quality.

Yes, this is a reason. They made it cool to be known for perfectly unkempt hair way before One Direction made the second — and slightly less talented — British invasion. Isaac rocks the coif, Taylor sings through his bangs and Zac is sporting a bit of a George of the Jungle style right now — but we can look past that. The Hanson bros may or may not have a restraining order against me after I slipped my fingers through their perfect locks the day we met. Trust me, it’s great hair.

4. I’m not embarrassed to listen to them with my mother.

In an age where Snoop Dogg is now a Lion and Taylor Swift incessantly whines about love lost, it’s hard to find quality music. Enter Hanson. The talented trio plays soulful, emotion-packed music and harmonizes lyrics about the true meaning of life and saving children in Africa (stay tuned for point number two). Not to mention recent jams like “Give a Little” and their latest single, “Get the Girl Back,” are fun for dancing. And we all love dancing.

3. You won’t find them in the tabloids.

This doesn’t really fuel my tendency to stalk celebrities but, hey, good for them. Unlike Justin Beiber and Miley Cyrus, the Hanson brothers keep to themselves and you won’t hear about what questionable substance they may or may not be smoking. They only go out in public with their wives (stay tuned for point number one) and their kids. They have a village of children between the three of them and what’s sexier than a rock star family man? Nothing. Thanks to theHansons’ normal lives, these children will grow up to become healthy, contributing members of society.

They started the Take the Walk Campaign to raise money for poverty relief in Africa. Cue sighs and swoons. They raised the bucks by hosting one-mile barefoot walks in each city of their concert tour. So basically, they put shoeless children above themselves and braved the streets of Baltimore without any kicks. If that doesn’t say loveable and tough, I don’t know what does. Even I, the real city-slicker that I am, know better than to do that. Kudos.

1. Their wives are each fans they met at a show.

Were you sitting down for that one? You heard me right: Each Hanson brother straight up picked a girl out of the crowd from their concert and wifed her up. Enough said. So you know, I’ve still got hope for two out of the three Jonas Brothers. Are they still a thing?