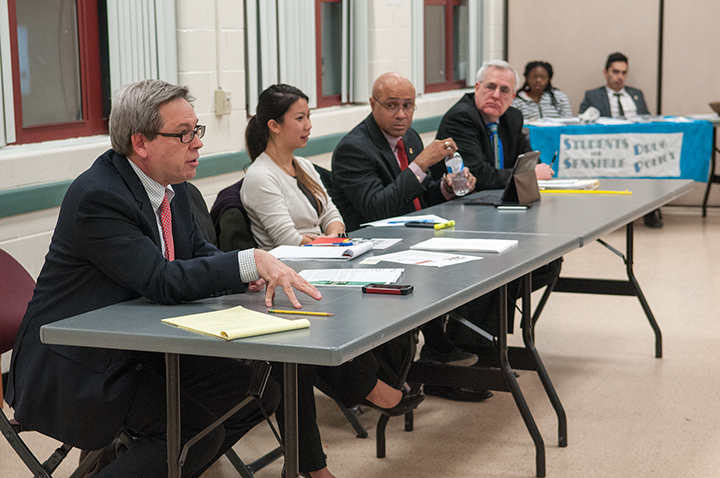 College Park residents gathered at the city community center Thursday to discuss upcoming bills regarding marijuana legalization and the impacts these changes would have.

The event, hosted by the Marijuana Policy Coalition of Maryland, featured five panelists who discussed marijuana legalization, focusing on how current laws harm citizens and how reform would benefit the community.

Mikayla Hellwich, the outreach coordinator for this university’s Students for Sensible Drug Policy chapter, said the event was organized because of two bills that are going through the General Assembly: One would decriminalize marijuana marijuana and impose a $100 fine for possession less than 10 grams, and the other would legalize and regulate the drug, similar to recent laws passed in Colorado and Washington.

“To some extent, I feel it is inevitable that we’re going to have a regulated marijuana policy soon,” said Hellwich, a senior horticulture major. “I want people to feel comfortable with these policies. I don’t want there to be a policy change because a majority of people vote for it unless everybody understands what the situation is.”

Walter Olson, senior fellow at the Cato Institute’s Center for Constitutional Studies, discussed this state’s unusually high spending on marijuana enforcement. He said the state has the fourth-highest number of marijuana arrests in the country — police arrest 1 in 250 state residents for marijuana possession per year — and spends about $134 million a year regulating the drug.

But state budget data wasn’t the main focus of the forum. Instead, speakers focused on the impact the war on drugs has had on households and communities.

Keeping people in the workplace rather than in a prison cell would have a large economic impact on the community, Olson said.

“People will be on better career paths because they don’t have to explain why they were in the criminal justice system,” he said.

In Prince George’s County, black people make up 66 percent of the population but account for 85 percent of marijuana possession arrests, Holness said.

She added that black men are disproportionately arrested for marijuana use throughout the state, even though studies show marijuana use is equal between black and white populations.

“We feel very strongly that the racial disparity alone is enough to move to taxing and regulating of marijuana,” Holness said.

Eric Sterling, Criminal Justice Policy Foundation president and member of the Maryland Medical Marijuana Commission, talked about the drug’s medicinal benefits. He gave a brief history of the use of medicinal marijuana, dating back thousands of years.

He also listed some ailments marijuana can treat, such as epilepsy, insomnia, cerebral palsy and multiple sclerosis, among others.

This state has a policy known as medical amnesty, which ensures that patients using the drug with a doctor’s note advising its use cannot be charged by police if caught, Hellwich said.

Hellwich proposed a bill that is going through the University Senate, which would eliminate penalties for students living on campus if they have a legal doctor’s note allowing marijuana use.

“The idea is to protect students because there’s a strict zero-tolerance policy, one strike you’re out kind of thing,” Hellwich said. “I don’t think someone that’s medicating should be thrown in jail or subject to university sanctions.”