Changing the Redskins for the better 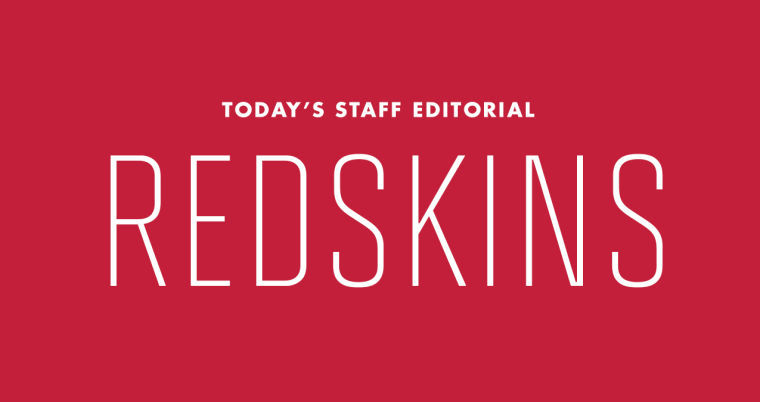 The NFL Competition Committee, an eight-man hodgepodge of team executives, coaches and former players, is meeting in Florida this week to discuss a number of potential rule changes in the league.

One of these proposed rule changes would penalize players who use the n-word on the field. While the issue has provoked a variety of reactions, on-field chatter is not the only place where the league should look to address racism.

Instead of backward and likely ineffective language limitations, the NFL should examine the institutional racism that has its home mere miles from this campus: the Washington Redskins’ name.

The Redskins have been in Washington since 1937.

That was a time when black Americans could not attend the same schools as white students; it was less than a decade before this country forcibly interned Japanese Americans in feeble wooden shacks; it was only 30 years after Oklahoma was made a state after American Indians were forced to relocate there.

Around that time, sports team owners were naming their all-black teams the likes of the “Zulu Cannibal Giants,” or the “Ethiopian Clowns,” and forcing them to wear war paint to games.

The name “Redskins” is not the mark of “a great history, tradition and legacy” as team owner Dan Snyder put it in a Washington Post letter in October. It is an artifact of an age defined by racism. It honors not the legacy of American Indians but the legacy of bigoted sports franchises from a past age.

Additionally, Snyder and other Redskins apologists made the argument that the word originated in American Indian languages.

“Given the fact that the name of Oklahoma means ‘red people’ in Choctaw, this request is a little ironic,” Redskins spokesman Tony Wyllie said smarmily in a statement.

While those claims might be true, the intent of the name is still riddled with issues. The name, conceived in a time when racism was trendy, was an attempt at objectification and elicitation of old-timey jollies from a bigoted white population.

Just because those in charge at the time weren’t quite as offensive as the minds behind the Cannibal Giants and the Clowns doesn’t mean they weren’t every bit as hateful.

Outside of the bogus, tired arguments defending the name’s supposed history, Snyder and Redskins executives also regularly argue the name does not offend American Indians.

In an Annenberg Public Policy Center poll Snyder has cited, 10 percent of American Indians respondents said the name was offensive. That argument leads to a very simple question: Since when is it OK to let a team name offend 10 percent of a population?

In the 2010 Census, 5.2 million people identified as American Indian and Alaska Native. If the Annenberg poll holds true across the population, that’s 520,000 people offended at a trivial sports team name. What makes that an acceptable number?

This editorial board supports every effort to change the team’s name. From congressional lawmakers’ recent consideration of eliminating the franchise’s tax exemptions to student fans writing in, there needs to be pressure on those at the top.

With coach Mike Shanahan recently getting the boot and quarterback Robert Griffin III’s continued efforts to turn around the team’s recent woes, there’s no better time to rebrand the team than now.

And to supporters at this university, worry not. A name change would not detract from the team’s Super Bowl XXVI victory or make quarterback Joe Theismann or cornerback Darrell Green any less talented or fabled. But it would move our culture forward instead of backward, and that’s an opportunity we should always take.