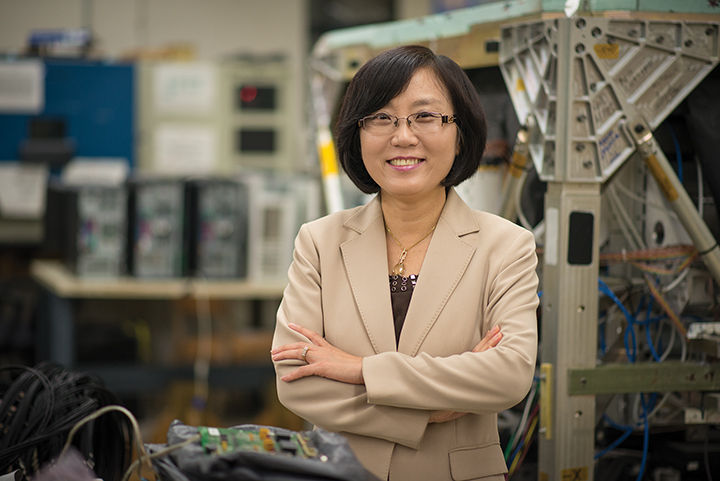 Eun-Suk Seo, a physics professor, stands in front of the ISS-CREAM payload.

Eun-Suk Seo, a physics professor, stands in front of the ISS-CREAM payload.

Most college students don’t get to say they worked on a project for NASA or see their work put to use on an International Space Station.

But more than 100 University of Maryland graduate and undergraduate who have worked with physics professor Eun-Suk Seo get to do just that.

Seo is working on a project called CREAM — Cosmic Ray Energetics and Mass — an international collaboration of seven universities and NASA’s Goddard Space Flight Center. The project involves an experiment to measure high-energy particles called cosmic rays and an attempt to solve long-standing mysteries about their origins. The team is constructing a version for the International Space Station called ISS-CREAM — pronounced “ice cream” — that is scheduled to launch next year, Seo said.

University students have been involved in the project throughout its progression.

“The students play a very important role,” Seo said. “They participate in all aspects of the mission, from the construction aspects, design aspects, to testing integration and data analysis.”

Work in the lab starts with the kinds of things “anybody could do,” Seo said. Some students were tasked, for example, with gluing down lots of little pieces of black paper that are intended to block contaminating light so the only light readings from CREAM are from cosmic ray signals. Others measured tungsten plates for consistency in thickness.

These may seem like a simple enough tasks, Seo said, but it’s important that students are able to do them properly, or else they could affect instrument construction or contaminate signals.

Senior physics major Michael Nester has been working on the project since June. He said he started off working on administrative aspects for the project’s website, and most recently has been helping run ground tests on CREAM.

“I really like the environment. … [The researchers] take an approach where if you’re interested in a project and you’re competent, they’ll find something for you to do,” Nester said. “Even though I’m maybe not doing super important work for the project, it is really cool that I can even be involved in some aspect.”

As they learn more, students might become more familiar with the instrumentation and be able to work on other significant parts of the mission as well, Seo said.

Shawn Rosofsky, a junior aerospace engineering and physics major who is working with the project, helps calibrate electronics and electronic noise measurements. Noise is interference that affects the data collected, he said, and his goal is to try to prevent researchers from obtaining bad data or misinterpreting particles.

“One thing I like here is I feel like my work is actually meaningful,” Rosofsky said. “It’s be a really fantastic experience.”

Once ISS-CREAM launches, Seo said, there will be even more opportunities for students. The project will take data 24/7 and researchers will be able to run the operation center continuously from the campus, she said. Students might be able to help analyze data from the experiment and communicate with astronauts in real time.

Seo said her student workers come from all different majors and areas of interest. Graduates have gone on to pursue careers ranging from patent law to mechanical engineering.

“It’s a unique, real-world experience,” she said. “And on their resume they get to say, ‘I worked with a NASA project.’”

Alumnus Azharul Haque, who worked in Seo’s lab between 2006 and 2008, said the skills he learned working on the CREAM project definitely translated to a job as a system administrator at Lockheed Martin Corp.

“Not a lot universities offer these kinds of great opportunities, where you can help build something that goes into space,” Haque said.

Seo said she hopes this kind of experience has a lasting impact on students.

“Even a long time after you graduate,” she said, “you can maybe tell your kid, ‘Hey, there is a space station, and a little piece of black paper that I glued is flying up there.’”