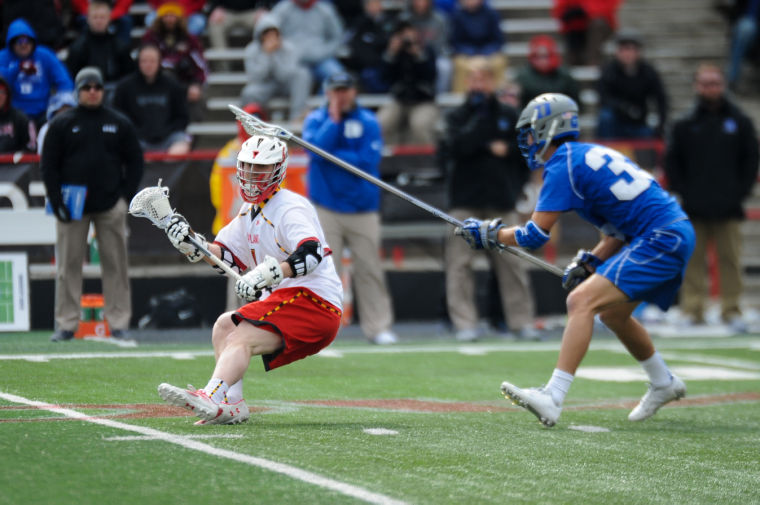 “We didn’t really play our best lacrosse,” Chanenchuk said. “But to come out with a win, it’s a good day.”

After bad passes from attackman Matt Rambo and midfielder Connor Cannizzaro led to turnovers in each of the Terps’ first two possessions, Chanenchuk opened scoring with 10:42 left in the first quarter, dodging to his left hand and finishing past goalkeeper Hayden Johnstone, who made seven saves in his first career start.

Midfielder Mike Andreassi tied the game less than a minute later, beating goalkeeper Niko Amato with a turnaround shot, but that would be the closest the Seawolves would come for the remainder of the contest. The No. 1 Terps went on to score five answered goals during the next 13 minutes — two more from Chanenchuk, one from attackman Jay Carlson, one from Rambo and one from attackman Henry West — to build a 6-1 lead early in the second quarter.

Attackman Brody Eastwood brought the Seawolves within four goals with 8:46 left in the half, scoring a close-range shot past Amato on an assist inside from Andreassi. But after sloppy passing from the Terps on the ensuing possession prompted coach John Tillman to call a timeout, attackman Tim Rotanz — who was making his debut after missing the first four games with an injury — scored his first career goal on a left-handed shot with 5:56 left in the quarter.

Less than 20 seconds later, defender Mike Ehrhardt forced a turnover, picked up the ground ball and started a fast break before finding Rotanz on the crease for the freshman’s second goal of the contest. Neither team scored in the final five minutes of the period, as the Terps carried an 8-2 into halftime.

The Seawolves cut into the Terps lead with 11:15 remaining in the third quarter after another Cannizzaro turnover. Midfielder Challen Rogers found Eastwood cutting to the cage on a defensive breakdown from the Terps. He finished with ease to make it a five-goal game.

Midfielder Bryan Cole answered for the Terps less than two minutes later after a skip pass from attackman Colin Heacock, finding the top corner on a left-handed bullet to put the Terps back up 9-3 heading into the final period.

Midfielder Jon Garino replaced Terps face off specialist Charlie Raffa, who appeared to have suffered a leg injury, at the start of the second half. And the Seawolves took advantage of Raffa’s absence in the fourth quarter, scoring three goals — one from Rogers, one from attackman Matt Shultz and one from midfielder Cody Vassallo — in the first five minutes of the period to cut the Terps lead to 9-6.

Raffa then returned to the game with a clear limp, winning the ensuing face off to give the Terps possession. However, a giveaway from Carlson led to a Seawolves possession that Shultz capped off with a goal with 8:24 remaining in the contest.

Raffa lost his next face off, and the Seawolves called a timeout, looking poised to complete the comeback down just two goals. But after the break, Terps defensive midfielder Brian Cooper forced a turnover, picked up the ground ball and cleared past midfield before Cole finished his second goal of the game to end the scoring drought with 6:41 remaining.

Less than two minutes later, Chanenchuk found the back of the net for the fourth time on the afternoon to put the Terps up 11-7. Andreassi scored for the Seawolves with just 1:12 remaining, but defensive midfielder Nick Manis forced a turnover on the ensuing possession to seal the Terps’ fifth win of the season.

“We knew we’d have some tough moments,” Tillman said. “We felt like it was going to be a back-and-forth game. We certainly hoped for the best but were realistic enough to know that most games are going to be a bit of dog fight.”