Michal Cekovsky’s first year in the U.S. as told by Instagram 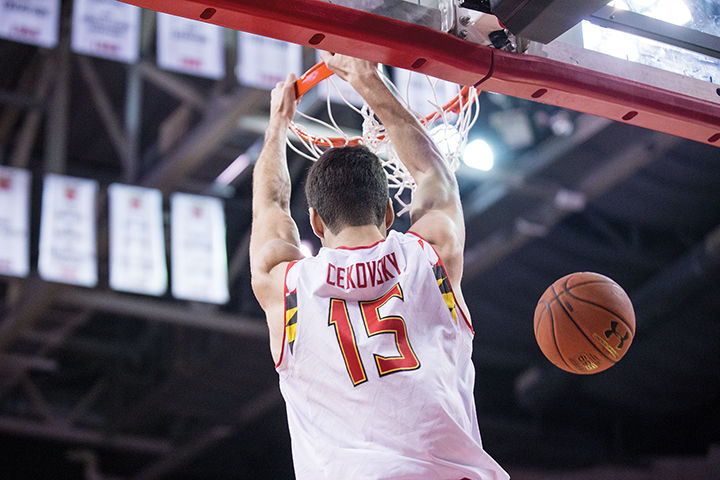 Forward Michal Cekovsky dunks the ball during Maryland's 82-52 victory over Winthrop at Xfinity Center on Dec. 6, 2014.

Forward Michal Cekovsky dunks the ball during Maryland’s 82-52 victory over Winthrop at Xfinity Center on Dec. 6, 2014.

Terps center Michal Cekovsky seems to like America so far.

The 7-foot-1 Slovakian averaged 2.6 points and 2.5 rebounds in 12.6 minutes per game in his first season in red, gold, white and black.

But how well has he adjusted to life in the U.S.? Because we are dealing with a relatively small sample size, I computed some more advanced metrics to find out how well he really is fitting in. Just kidding; I just looked at his Instagram account.

First and most important, his teammates have made sure he has seen the two most significant American movies of all time: The Fast and the Furious and The Hangover.

He clearly empathized with the rest of us when it came to Paul Walker’s passing.

Look at the comments on this one:

Notice Ceko and Richaud Pack (rickyracks_) re-enacting the “It’s not a man-purse; it’s a satchel” scene from The Hangover.

It’s probably easier to ’gram as an athlete. Someone else takes all the pictures for you, and then (you just pick a filter and a caption. You don’t even need to use words.

My guess is he’s telling people to wait for the big American unveiling of his silky-smooth jumper.

Look at Ceko’s highlight tapes from his time on Romania’s U-20 team. Fast forward to 23 seconds in, and there it is:

I know, the video quality isn’t great, and the video is unnecessarily long. One of the “highlights” is Ceko shooting a free throw, and another is him getting a rebound after a missed free throw.

But make no mistake about it; the jumper is there.

I thought for sure he and Turgeon were waiting to unleash the jumper in the tournament this year as a secret weapon, but alas, it wasn’t so. He and Turgeon must be playing an even longer con, so 2016 is poised to be the biggest year of Turgeon’s career. Diamond Stone playing in what could be his only season with the Terps, Melo Trimble and Jake Layman in what is likely to be their last year with the program, expectations higher than ever and a team that will be in the national title conversation when the season tips off. Next year will be the year he pulls out all the stops.

In the biggest game of the year, when the Terps look like they are facing an insurmountable deficit, Michal Cekovsky will start raining threes to save the day. Just you watch.