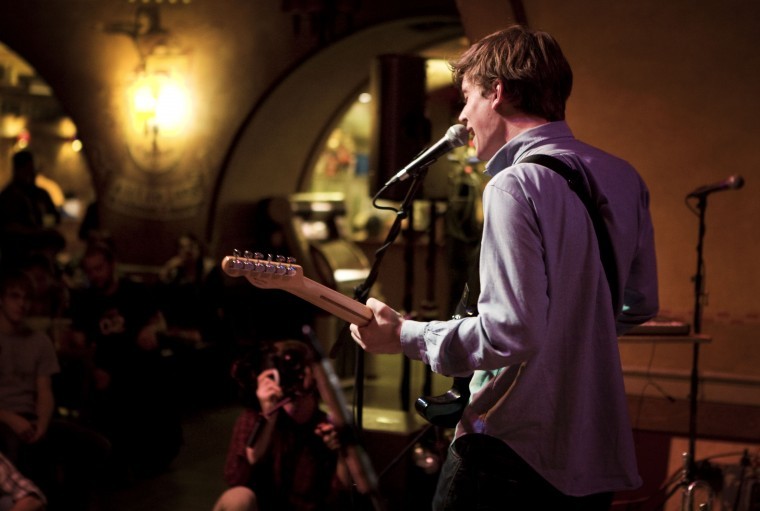 “I would never describe my own music as lo-fi,” said Alex Schaaf, lead singer of Yellow Ostrich. And yet, that’s exactly how the band’s description reads on Spotify: “lo-fi indie pop.”

Schaaf understands why the term is thrown at his band, which plays at the Black Cat tonight in Washington.

“I prefer to be a little more unpolished,” he said. “But mostly, when I see the term ‘lo-fi,’ it’s just kind of annoying. It’s like: ‘But wait, I was trying to make it sound really good!’”

The label Schaaf prefers for his music is “rock ‘n’ roll.” It’s a far more accurate one. Strange Land, Yellow Ostrich’s second full-length album, is full of charging anthems that offer plenty of moments perfect for dancing and rocking out.

The “lo-fi” tag lingers because of Schaaf’s insistence on making the music sound raw and powerful. It doesn’t come from cheap production techniques or intentionally weak studio recordings. “You can work with really nice equipment and really hi-fi stuff but at the same time still try to add a lot of grit and dirt into it,” he said.

The band’s style of upbeat indie rock is heavily affected by a unique sense of purpose and meaning in the percussion. In Yellow Ostrich’s music, drums are an essential force behind the music in a manner different from your average band. Continuously intertwined with the chords and melody, they bounce and shape-shift along with the music.

“I’ve always thought that percussion is one of the most important parts — obviously it just gives so much of the energy,” Schaaf said. So what is it about Yellow Ostrich’s percussion that sets the band apart?

“Just trying to get a big powerful sound but approaching it in different ways than would be the default or standard,” he said, “I think makes it interesting and turns the drums into something that stand out on their own and aren’t simply a time-keeping thing in the background.”

On its new EP, Ghost, Yellow Ostrich has taken another new approach to percussion — going with almost all-electronic drums. The sounds on Ghost are often more like automated “beats” than traditional rock ‘n’ roll rhythms (think the hip-hop inspired chorus of “We Are Young”).

Schaaf doesn’t think this particular change is indicative of a greater shift for the band — just a bit of experimentation on a six-track EP.

“It wasn’t like we sat down and said, ‘The next one we have to have electronic drums,’” he said. “But we just kinda started working on these songs and it just ended up sounding different. I think a lot of it is natural, just because we always want to do something different from one thing to the next.”

As for that next project, it might be a little bit in the distance. Both Strange Land and Ghost were released this year and the band is in the midst of a tour that will take it through the middle of November. Schaaf, himself, isn’t sure about the future of Yellow Ostrich’s sound.

“I don’t know what the next thing will be,” he said. “There might not be any electronic drums … there might be no drums! Just kidding, there are probably gonna be drums.”