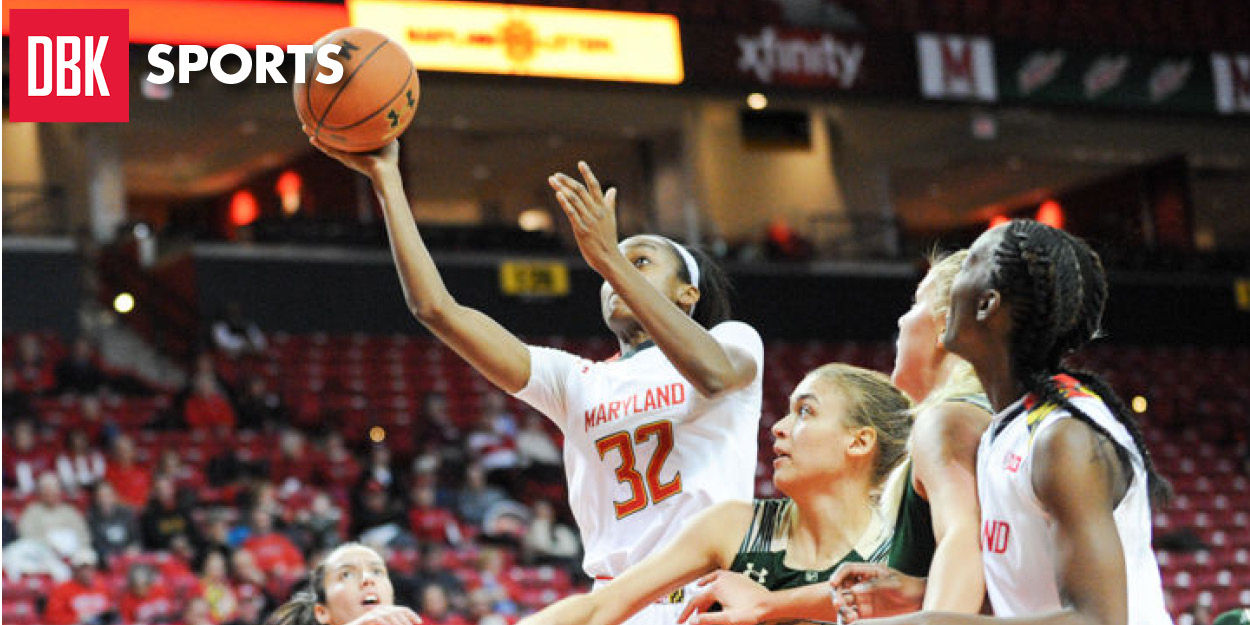 Before the Terrapins women’s basketball team’s game Sunday, coach Brenda Frese jokingly asked guard Shatori Walker-Kimbrough if she was going to get a chance to play in the first half. Early foul trouble had cut into the sophomore’s playing time during the Terps’ season opener and exhibition games, but she made it through all of Sunday’s win without a foul.

Walker-Kimbrough managed to stay out of foul trouble again Wednesday night against South Florida and logged nearly 18 first-half minutes. In more playing time than she’d earned in either of the Terps’ first two contests, the Pennsylvania native dropped 17 first-half points to tie her career high for a game.

The sophomore finished with a game-high 25 points to power the No. 9 Terps to an 85-67 victory over South Florida at the Xfinity Center.

“What she was able to do was really explosive,” Frese said. “She really helped set the tone from the tip.”

Walker-Kimbrough hadn’t attempted a 3-pointer in the Terps’ first two games, but that didn’t stop her from launching a three on the opening possession of the game. She sunk the basket and her next two from the floor to help the Terps (3-0) jump out to a 10-point lead less than six minutes into the game.

“My main focus was just letting the game come to me and just taking what they gave me,” Walker-Kimbrough said. “My team gave me confidence early

The Terps benefitted from strong shooting from guard Lexie Brown in the opening 20 minutes as well. The sophomore also hit her first three field goal attempts to finish with 15 points on 7 of 14 shooting.

With the offense clicking, the Bulls (2-1) suffered from early foul trouble. South Florida’s Katelyn Weber committed two early fouls, and the 6-foot-5 center was forced to sit for 12 minutes in the first half.

Additionally, forward Alisia Jenkins — the Bulls’ second-leading scorer at 10.5 points per game — picked up three fouls in the first half before committing her fourth in the opening minutes of the final period.

“We knew what players we needed to get out of the game, so we went right at them,” Brown said.

The foul trouble left South Florida even more dependent on guard Courtney Williams than usual. The Terps, especially Walker-Kimbrough, were able to key in on the junior and held Williams to 16 points on 7 of 22 shooting.

“Shatori was sensational on her,” Frese said.

Walker-Kimbrough capped her big half with a standout play on the defensive end. With the clock winding down, she chased guard Shaleth Stringfield and swatted her fadeaway jumper into the stands as the buzzer sounded.

The Terps took a 17-point lead into the locker room, but South Florida went on an 11-0 run early in the second half. Walker-Kimbrough got into the paint and finished a pass from Brown to end the comeback bid, though.

After relying heavily on their defensive press to create easy baskets in the first two games, the Terps proved the offense is capable of producing buckets in the halfcourt set, as well.

“We let the game come to us,” Brown said.

Despite committing one more turnover than the Bulls, the Terps earned a convincing win over a team they beat by eight points a season ago.

And it was Walker-Kimbrough — who made her career debut in that game last year — who led the charge.

“Really a solid win early in the season, especially [against] a team that is going to be in the NCAA tournament,” Frese said.