Going for the good 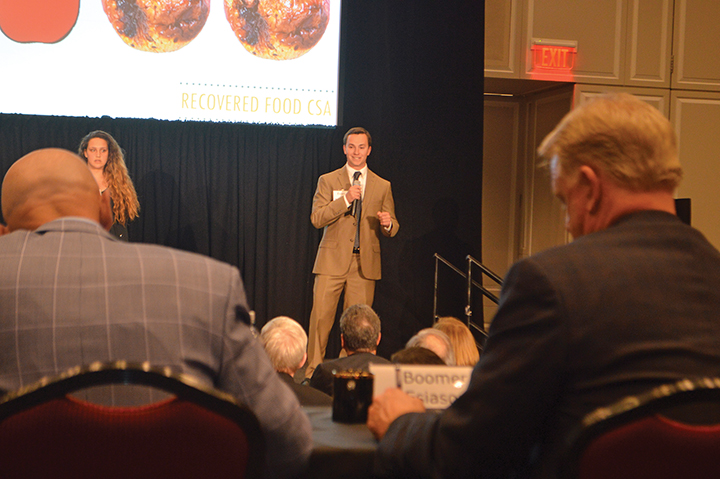 Evan Lutz, Food Recovery CSA project coordinator and senior business management major, presents his group’s work to the judges at yesterday’s Do Good Challenge. The team was one of six competing for tens of thousands of dollars.

Evan Lutz, Food Recovery CSA project coordinator and senior business management major, presents his group’s work to the judges at yesterday’s Do Good Challenge. The team was one of six competing for tens of thousands of dollars.

Six university-student teams pitched their philanthropic ventures and projects to a panel of judges yesterday night, in an effort to win the university’s Do Good Challenge.

The annual competition sponsored by Morgan Stanley — a financial services corporation — inspires university students to come up with an idea to make a difference for a cause they’re passionate about within an eight-week period, said Robert Grimm Jr., public policy professor and creator of the Do Good Challenge.

“We want to make philanthropy a pillar of the university experience,” Grimm said.

Each of the six finalists had five minutes to convince the judges and philanthropists they deserved to win at the Samuel Riggs IV Alumni Center. The panel of judges included former NFL quarterback and 1984 alumnus Boomer Esiason, sports agent David Falk and Morgan Stanley Global Impact Funding Trust board member Bob Seaberg, who selected the winners based on three criteria: impact, leverage and creativity.

The public policy school’s Center for Philanthropy and Nonprofit Leadership created the competition in 2012 and teamed up with the business school’s Center for Social Value Creation this year to split challenge into two tracks: projects and ventures. Projects encompass a one-time initiative supporting an existing cause, while ventures are student-founded nonprofits, said Kiki Griffith, a junior criminal justice and criminology major and Do Good Challenge committee member.

“When the audience is evaluating [the teams], they may not realize that the student who’s raising money is doing something just as powerful as starting a nonprofit organization,” said Griffith, who helped choose the finalists. “So we made the differentiation so that it would be more fair to all the teams.”

First prize in the ventures category went to justlikeyou.org, a student-created pen pal-like social networking website that connects users to help them support each other when coming out about their sexuality.

“When I was watching [Gabel], I just kept saying to myself, ‘passion and credibility,’” Esiason said.

Gabel said he started the venture because it is a resource he wishes he had during his own coming-out process and that the website acts as a stepping stone to encourage LGBT youth to take advantage of available alliances.

“The biggest problem we see today is not that we have inadequate resources, it’s that people aren’t ready to show up. And the missing component there is trust,” the senior marketing major said. “That’s why we see roughly 73 percent of LGBT youth going online rather than talking to someone in person.”

Students Helping Honduras, an on-campus group whose members travel to Honduras to build schools, came in first place for the projects category.

The other venture finalists included Community Pipeline, a collaboration between university clubs and organizations and Prince George’s County elementary and middle schools, and Recovered Food Community-Supported Agriculture, an initiative that sells surplus food from farms and grocery stores to students and matches the sales with donations of food to Baltimore and Washington families.

Terps Against Hunger, a project that provides emergency food assistance to local families, and Ride4ECO, an initiative to build a bike stop at ECO City Farms in Edmonston for area residents to access affordable groceries, came in second and third for projects, respectively.

Finalists earned more than $25,000 in prizes, and first-place winners in each track received $6,000. The audience also chose Students Helping Honduras as the winners of the Behavioral and Social Sciences College’s  “Be the Solution” Audience Choice Award $2,500 prize, while the National Scholarships Office awarded Community Pipeline President Nick Henninger and treasurer Ryan Crowder, a $6,000 Maryland Leadership and Discovery Grant.

Fifty-eight teams initially entered the competition this year, Grimm said. The challenge committee reviewed the entries and invited semifinalists back to pitch their ideas. From there, the committee decided on a final three for each track, Griffith said.

“As much as possible, we want to continue to support these student groups even as alums,” Grimm said, “because when Maryland students go out in the world and unleash their ventures to the world, they represent the greatness of this university.”

And beyond the monetary and networking benefits, the challenge encourages students to incorporate philanthropy into their ventures, said Evan Lutz, project manager for Recovered Food CSA.

“It’s an absolutely incredible initiative that the University of Maryland desperately needed,” the senior management major said. “You know, there are so many business competitions … they’re just lacking in social value. And social value is something that’s really up-and-coming.”