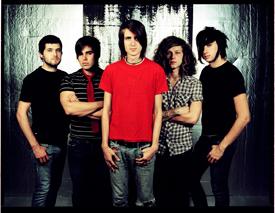 Since 2006, the band has released two full-length albums and two EPs, all with impressive sales. Their latest work, a self-titled album that dropped on Oct. 4, quickly reached No. 5 on iTunes in a matter of days.

This news bodes well for the band, which kicks off its headlining tour tonight in New York along with We Are In the Crowd, There For Tomorrow and The Make. They will play at the Fillmore in Silver Spring on Sunday.

It seems the future looks bright for a band that has had its fair share of highs and lows. Mayday Parade began as a convergence of two popular bands in 2005 out of Tallahassee, Fla. After the success of its first, independently released album, the band was signed to a label to work on its debut studio album. It was then that one of the band members, Jason Lancaster, quit unexpectedly.

The band quickly bounced back, earning the moniker “the hardest working band of 2010” by Songkick.

This year, the intentions are no different. The 2011 Noise Tour promises to be a massive event that will last all night long.

“Anything you see from a headlining tour, the big lights and sound, is going to be there,” said guitarist Brooks Betts, who plays guitar. “Even when we get into smaller rooms, we are bringing what we can.”

Fans may recognize Mayday Parade from its distinct sound, but this is not the same band that it was five years ago.

“In between Lesson and Anywhere But Here, we tried to expand,” Betts said. “Now we want to sound more mature, with an obvious progression, more developed sound and more confident.”

Regardless, Mayday Parade’s first allegiance is to the fans — who can expect both songs off the new album and longtime favorites to make an appearance on this tour.

“We are the headliner so we are throwing some weird [songs] in too,” Betts said.

All of this evidences the fact that fans should prepare to see a more intimate and personal side of the band than they have ever been privy to before.

“We take the reigns a lot more now,” Betts said. “We aren’t afraid to sound like what we want.”

Mayday Parade will play at the Fillmore in Silver Spring on Sunday. Doors are at 6 p.m. Tickets are $18.