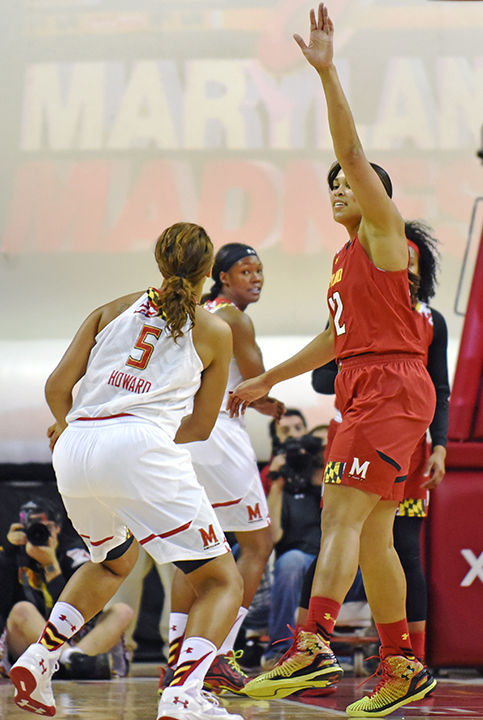 As the Terrapins women’s basketball players sat scattered at round tables at Xfinity Center for media day Oct. 20, two starters from last year’s backcourt were nowhere to be found.

Former guard Laurin Mincy had exhausted her eligibility after last season, capping a five-year career with the Terps. Point guard Lexie Brown, meanwhile, had transferred to Duke in the offseason after leading the Terps to back-to-back Final Fours.

So as the new starting guards get acclimated to their bigger roles, the Terps will hope to rely on their frontcourt, which returns starting centers Brionna Jones and Malina Howard, for increased production. Plus, coach Brenda Frese added two McDonald’s All-American freshman forwards.

“We all go at it every day in practice, and I think that’s really big,” Howard said. “We’re all trying to make each other better. No one goes lightly on each other.”

With former three-time All-American forward Alyssa Thomas dominating the paint during Howard’s first two years in College Park, the Twinsburg, Ohio, native was relegated to a reserve role. Howard made 68 appearances and averaged 19.2 minutes per game over that span but started just 11 contests.

Thomas and center Alicia DeVaughn graduated after the 2013-14 campaign, however, leaving room in the starting lineup for Howard and Jones entering the Terps’ first season in the Big Ten.

The frontcourt duo was a constant in the Terps starting lineup last season, combining for 18.2 points and 13.4 rebounds per game while starting all 37 contests. The coaches rewarded Jones’ play with first-team All-Big Ten honors — she averaged a double-double in conference play — and voted her to the preseason All-Big Ten squad entering this year.

“With the past posts like Malina and Brionna,” forward Brianna Fraser said, “they really help us get together in practice and they help through everything.”

A consensus top-20 recruit out of South Shore High School in Brooklyn, New York, Fraser drew praise from Frese for her ability to block shots, secure rebounds and provide inside scoring.

But it’s the 6-foot-2 Gillespie who left Meriden, Connecticut, for College Park that Frese believes has shown the potential to make an impact for the Terps right away.

“This kid’s going to be really special,” Frese said. “Just wants the big stage, wants the big moment, ultracompetitive, a matchup nightmare in terms of her versatility.”

Fraser said she and Gillespie have meshed well with their veteran teammates so far. Howard, meanwhile, discussed the luxury of having a variety of post players to go against in practice.

“In the Big Ten, the posts are all different: Some are shooters, some are bang post players, some of them are attack-the-rim post players,” Howard said. “It’s cool for us to be able to play against each other like that in practice to get ready for the season.”

With a loaded front line and a thin backcourt, teams might try to pack the paint and force the Terps to beat them from the perimeter. And while they don’t have Brown or Mincy around to bury shots, Jones is confident in the new-look lineup.

“If they can hit open shots,” Jones said, “and we can offensive rebound and just keep the ball moving around the perimeter and create open shots, I think we’ll be fine.”