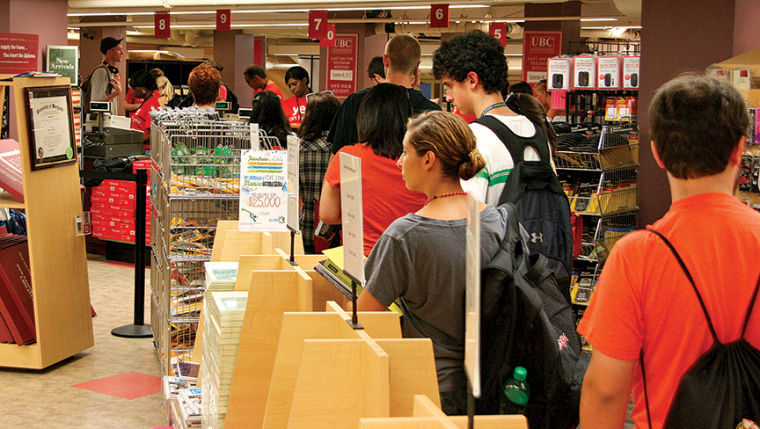 Students waiting to buy textbooks on a long line in the University Book Store. Textbook prices have risen at a faster rate than college tuition, housing and health care.

Students waiting to buy textbooks on a long line in the University Book Store. Textbook prices have risen at a faster rate than college tuition, housing and health care.

A student-driven initiative plans to turn the page on skyrocketing textbook costs by promoting an affordable, online educational resource that’s picking up steam across the nation: open-source textbooks.

Starting this fall, the University System of Maryland Student Council will pilot a program to allow interested faculty members in high-enrollment, entry-level classes to use open-source textbooks. The system, published under a publicly accessible copyright license, allows professors to customize textbook material from a pool of online resources, videos and graphics.

Interested faculty teaching lecture-sized introductory courses at this university and other university system institutions will take this semester to learn about the features of open-source textbooks in guided workshops. In the spring, the council will analyze the effectiveness of the program by examining student satisfaction, academic achievement and faculty willingness to use the resources.

A statewide working group with representatives from the system, the Maryland Association of Community Colleges, the Maryland Independent College and University Association, St. Mary’s College of Maryland and Morgan State University will also evaluate the feasibility of the program. The council plans to meet with legislators by the end of this year to finalize details of the program.

Whether students enrolled in this state’s colleges or universities will see a state-supported open-source textbook initiative by 2015 depends on the pilot program’s success, said James Jalandoni, USMSC president and former Student Government Association director of governmental affairs. Similar initiatives on the federal level — including a 2009 bill that would have authorized grants to create, update or adapt open-source textbooks — died in Congress, but Jalandoni said he’s optimistic because of statewide support.

“I think it gets to the root of the textbook affordability problem,” Jalandoni said. “We want to disrupt the current system to shift it toward more affordable options overall.”

In the past few years, state universities in Washington, Ohio, California and Texas began offering state-supported repositories of open-access textbook materials to help lower the cost of education. Textbook costs have increased 812 percent in the last 35 years, far outpacing rising costs of tuition, health care and housing during the same time period, according to the American Enterprise Institute.

In the classroom, the biggest barrier to the program’s success is awareness, said M.J. Bishop, director of the university system’s Center for Innovation and Excellence in Learning and Teaching. Many students and faculty are not aware peer-reviewed open-source textbooks are alternatives to traditional textbooks, Bishop said.

Scott Roberts, the psychology department’s director, has been using a free, self-assembled textbook to teach the university’s introduction to psychology class,

PSYC 100: Introduction to Psychology, a choice Roberts said has saved about 2,200 students a quarter-million dollars going into the semester. The average student spends about $1,200 on books and supplies annually, according to estimates by the College Board.

Despite the extra time needed to update the book’s dead links or make a last-minute substitution, Roberts said he can’t think of a better time investment. Most of his students welcomed the free book.

“It is hard to imagine turning back after the success we have had with the open text,” Roberts said.

Although the affordability and Wikipedia-like feel of open-source textbooks is alluring, sophomore biology major Lucy Wang said she would still prefer to buy an expensive, traditional textbook to ensure the information is factually accurate. Though she likes the idea of updates and revisions, she said it might be hard to trust open-source textbooks, especially if the sources contain dead links.

In the end, Kevin An, a junior information systems major, said students likely will weigh the benefits of a zero-cost book with the ability to highlight and take notes on traditional textbooks.

The university is looking into ways to provide incentives and technological support for interested faculty, said Gary White, libraries public services associate dean. The library system runs a university repository in which students and professors can store open-access textbooks.

Despite the lack of consensus on the role open-source textbooks should play in higher education, the university system’s student regent board member and Salisbury University student Samim Manizade said they have already proven to be a viable alternative to expensive textbooks and another example of technology “disrupting and improving the old scheme of things.”