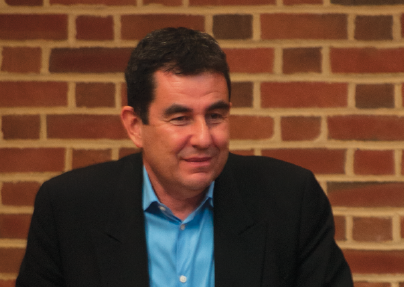 Ari Shavit, a columnist and reporter for the Israeli daily newspaper Haaretz, discusses his book about the complexity of Israel’s history.

Ari Shavit, a columnist and reporter for the Israeli daily newspaper Haaretz, discusses his book about the complexity of Israel’s history.

Ari Shavit defines himself as a proud Jew, Israeli and Zionist — but that doesn’t mean he is afraid to voice his criticism on those matters.

“We should all criticize what is wrong with Israel; we should be fair and honest about discussing Israeli wrongdoing,” Shavit said last night in the Prince George’s room of Stamp Student Union. “But we should also look at this astonishing human pride because in many ways, Israel is the victory of the human spirit.”

Shavit, an Israeli journalist, columnist, commentator and author, spoke about his New York Times bestseller, My Promised Land: The Triumph and Tragedy of Israel, last night to a crowd of about 150 people.

Professor Yoram Peri, director of the Gildenhorn Institute for Israel Studies and Abraham S. and Jack Kay chairman in Israel Studies, introduced Shavit and moderated the event. Peri said he found Shavit’s work groundbreaking, thoroughly enjoyed his book and decided to use it in one of his classes this semester.

“His approach is critical. He is criticizing some of the policies of the government of Israel, in the end, from the point of view of someone who is committed to the security of the state,” Peri said. “He’s a committed Israeli; it’s a very interesting approach.”

The story is told through personal stories and covers more than 100 years of Israeli history. The book begins with stories of Shavit’s great-grandfather, an early Zionist in the 1890s, and goes on to describe the nation today. He said he tried to write the book from a new angle.

“I didn’t see a book that tried to deal with [the] overall Israel story in a personal way. This isn’t a coincidence,” Shavit said. “The fact that there isn’t such a book is because we’ve lost our narrative. This is deeply sad and troubling. We were a narrative before we were a nation. And ironically, the stronger Israel became physically — the more economic power, political power, military power it had — the narrative which is so essential for us evaporated.”

Though the book is nonfiction, Shavit said it’s far from dry reading. He said he used real people’s stories to make the book more approachable and enjoyable.

“I’m a political person, and I have very strong opinions, but that was not the mission,” he said. “The mission was to enable us to open our hearts and eyes to look at what was really happening.”

Theodora Klayman, a university alumna, said she finds the book to be a worthwhile read.

“I like the fact that it comes from a personal point of view,” Klayman said. “It’s very easy reading, which I think is a good idea because this book is much more accessible for the general public.”

Shavit also discussed the challenges of living in Israel today. He noted the impact of Zionism on his homeland — the liberation movement was not only valuable politically, socially and economically, but it also physically saved many Jews, he said.

“Zionism failed to create a utopia, but what Zionism did succeed in creating is the most amazing, robust, free society one can imagine,” Shavit said. “We are creative and we are innovative and we are sexual and we are sexy. At the end of the day, there is something incredible about our being. What you have in this Jewish-Israeli saga is the story of the people who came from death and are in many ways threatened by death but have chosen life.”

Even with that resilience, Shavit said he worries about the nation’s future.

Shavit fielded questions after he spoke, as he said he believes deep, intelligent discussion is really what Israel needs.

“He appreciates that there are other points of view, but he is very good at explaining why he feels the way he feels and what he thinks is necessary in order for Israel to survive,” Klayman said.

Sophomore Harrison Lee came to the event for his ISRL 448A: Seminar in Israel Studies; Israel Politics and Society class.

“Not knowing anything about Israeli politics for the most part, it’s interesting to see an insider’s perspective,” said Lee, a government and politics major. “Overall, I was very impressed with him.”

“It’s an excellent book,” Peri said. “It’s personal, but his personal life reflects the lives of the whole generation.”