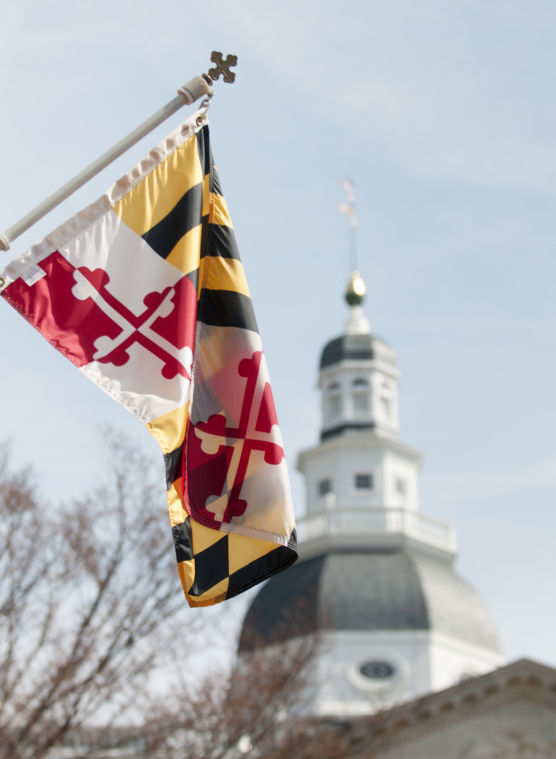 A Maryland flag hangs outside the State House in Annapolis.

A Maryland flag outside the State House in Annapolis.

One week after President Obama announced the creation of a White House task force aimed at combating sexual assault at the nation’s colleges, a committee in this state’s House of Delegates heard testimony for a bill with similar goals, highlighting a growing awareness among campuses nationwide.

If passed, the state’s bill, sponsored by Del. Jon Cardin (D-Baltimore County), would require all University System of Maryland institutions to administer a sexual assault survey every three years — focusing on student experiences with sexual violence, how universities are responding to incidents and the ways students are educated — then report those findings to the Maryland Higher Education Commission.

The House Ways and Means Committee heard testimony on the proposed legislation yesterday, including from university alumna and former Diamondback editor Lauren Redding.

The surveys, Redding said, would create greater accountability at the state level, allowing officials to “zero in” on sexual violence, rather than overall crime, which colleges are already required to report under the Clery Act.

Some university system officials have described the bill as an unfunded mandate that would do little to solve the problem of college sexual assaults.

The surveys themselves are not designed as prevention methods, though, Student Government Association President Samantha Zwerling said. Instead, the surveys target sexual assault survivors, who might realize they are victims after taking the surveys or feel more comfortable reporting their experiences. She also said the anonymity of the surveys could lead to more truthful responses.

The task force is the first of its kind in the federal government and came after a report from the White House Council on Women and Girls found that nearly one in five women have experienced rape or attempted rape, but 12 percent of student victims report the incident.

As a whole, the proposed legislative changes are responses to the growing movement of students and recent graduates stepping out as sexual assault survivors, said Redding, former president of UMD Feminists.

“We’re taking a stand and saying, ‘We haven’t been treated right by our schools. These universities haven’t been dealing with it in the right way; they’re fostering environments where rape thrives,’” Redding said.

The “tidal wave of change,” as Redding described, started out slowly as survivors filed complaints to the U.S. Department of Education and gradually picked up, ultimately landing in the White House, she said.

This university implemented a sexual harassment education pilot program in the fall. The Violence Intervention and Prevention Program, authored by Redding during her senior year, was administered to between 300 and 600 incoming undergraduates, but Redding said ideally all university students would attend the program.

“Just anecdotally, I would say that we have received more complaints this year than in years past, as more students are coming forward,” Goodwin said, adding that this year the department has been paying close attention to all reports of Title IX violations.

Zwerling said she is thrilled the issue is garnering national attention and being recognized as an important issue, but there is still more to be done. Though it may not be solely a college problem and blame should fall on society as a whole, she hopes the university will recognize its opportunity to intervene and end the cycle of violence.

“There is no other societal infrastructure that can so actively make a change and directly educate people, as a university can in educating the students on its campus,” she said.

Redding echoed similar sentiments. Not only undergraduate students but also all members of the campus community should receive sexual assault education, she said, adding that “change will only happen if every constituency is engaged.”

“If the campus is 98 percent people agreeing that sexual violence is bad, that perpetrators should be held accountable and sexual victims are never at fault, that’s still not enough,” Redding said. “If 2 percent don’t agree, there is still more work to be done.”