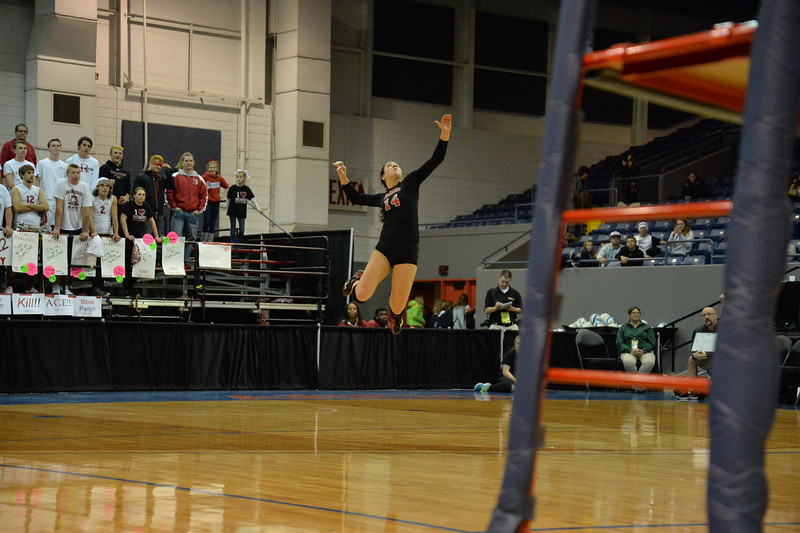 Maryland volleyball outside hitter Gia Milana remembers how people ridiculed her small hometown of Romeo, Michigan, when she was growing up.

People mocked her high school for being “full of farmers,” and opposing fans would show up to sports games donning overalls and straw hats. When Milana walked into the Romeo High School gym during her freshman year, she said no one expected her volleyball team to be successful.

Two seasons later, she guided the Bulldogs to their first-ever Class A state championship.

That experience, paired with an upbringing in a town she described as “just a bunch of cornfields,” led her to embrace an underdog role. It’s why she joined the Terps — who haven’t had a winning record since 2012 — despite having offers from some of the best programs in the country.

“We knew that no one expected us to really do much, so it was really cool to … win the state championship,” Milana said. “That eventually made me want to do it again and that’s why I picked Maryland.”

Ranked No. 15 in this year’s freshman class by PrepVolleyball, Milana is the highest-rated recruit to ever play for the Terps.

Coach Steve Aird called Milana’s decision to come to College Park a “huge deal.” He said it sent a message to other schools and recruits around the country that Terps were capable of attracting some of the top young talent.

But Milana, who went from being an unknown high school freshman in a small town to the coveted recruit that won the 2015 Gatorade Michigan Player of the Year Award, still has a hard time believing how far she has come.

When she received her first two recruiting letters in the mail from Florida and Arkansas as a 13-year-old, she ran inside her house to tell her mother.

When her mother came to the door and saw the letters, she started screaming with excitement.

“We both were running around the house,” Milana said. “It was just a crazy moment.”

Soon after, she started receiving letters from programs such as Michigan, Wisconsin and Purdue. But as she visited schools across the country, she grew frustrated.

“All of them were the same,” Milana explained. “They all boasted about how good their programs were. I watched practice and it didn’t feel that they really wanted to go somewhere. They were content with where they were.”

Plus, she felt that joining a powerhouse program wasn’t the right fit for her. She wanted to help build something new.

Milana wasn’t even swayed by Penn State, which holds the NCAA record for national championships, during a visit early in her high school career. But Aird, then a Nittany Lions assistant who led her around the campus, made a personal impression on her.

“He was just so cool and goofy and real,” Milana remembered.

After Aird took the head coaching position at Maryland in 2014, he emailed Milana to check in with her. Then, over the phone, he asked her to consider a visit to College Park.

Again, she turned to her mother.

“Gia, just do it,” her mother replied.

The moment she stepped on this campus, Milana said she felt a connection with Maryland and “didn’t want to leave.”

The Terps, who had just joined the Big Ten, were the underdogs of their new conference. But she sensed how excited they were to build a team they hoped would challenge the country’s more established squads.

At the end of her visit, Aird acknowledged it would be difficult to make Maryland competitive again. Her commitment, he claimed, would be another step in the process.

“Gia, it’s going to take a lot,” Aird said. “You’re going to have to really work and try to help me change this program. You just need to trust me.”

Milana was hooked. She visited Wisconsin soon after but said it didn’t have the same emotional appeal as Maryland.

Aird remained worried she would decide to play for the Badgers, so when Milana called him to commit to Maryland, she took on a somber tone to scare him.

“I just called to say thank you for all you’ve done for me and for recruiting me all of these years,” Milana said. “You’ve been a really cool guy in person and I’m sorry but—”

“You’re going to have to deal with me for the next four years,” she finished.

Aird, who preaches the importance of trust, said it was meaningful to have a player like Milana have faith in his vision for success.

“When you find a young athlete who believes in you as a coach, that’s an awesome thing,” he said.

Milana arrived in College Park last semester to get a head start on preparing for her first season with Maryland. Right away, she had a similar feel to her freshman year in high school when “no one took us seriously.”

“It just gets me that much more excited because I know what this program will be like in four years,” she said. “I’m certain that we’ll have respect, we’ll compete with these [Big Ten] teams, we’ll make it to the Sweet 16 and even to the Final Four.”

For now, though, Milana must deal with the expectation that she, along with the rest of Maryland’s nationally ranked freshman class, will produce on the court right away. Aird said he expects the team’s underclassmen to play a lot this season.

“I’m in awe of this opportunity and how not many people in the world get to experience this,” Milana said. “So I’m just taking it one day at a time.”