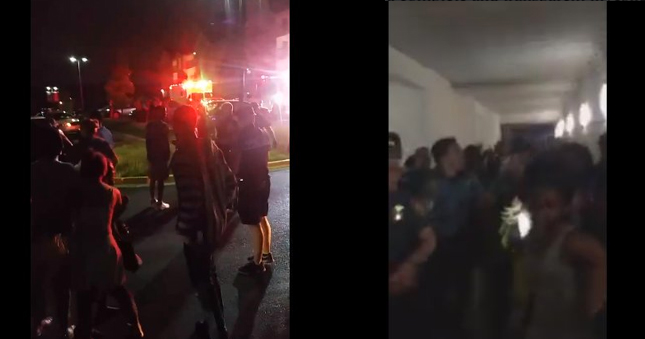 University of Maryland police officers’ use of pepper spray to break up a graduation party of predominately black students was justified, but could have been avoided had the officers used a less hostile approach, according to the police chief’s summary report.

One officer is suspended for two weeks without pay for “conduct unbecoming an officer,” including incorrectly deploying pepper spray although the use itself was justified, according to Police Chief David Mitchell’s summary report released Thursday from the May 21 incident at the Courtyards apartments.

“This did not have to happen,” university President Wallace Loh said in an interview with The Diamondback. “There are a lot of people in their daily interactions that are a bit confrontational or raise their voices. And that’s not a crime; it’s just bad manners. But if you do that when you’re wearing a uniform, that has consequences.”

Were you at the graduation party? We want to hear about it. Please email newsumdbk@gmail.com and we will get back to you shortly.

The five-week investigation led Mitchell to announce department-wide training in cultural diversity and implicit bias, order a review of the department’s use of force guidelines with input from the community, including students, and informed the public that the state drop its charges against the two people arrested in the incident, according to a campuswide email from Loh today.

“That night excessive force was used by the police multiple times and the trauma that was inflicted on the victims is something that cannot be undone,” some students who were at the incident said in a statement to The Diamondback. “Victims went to bed that night shaking out of shock of how a night of celebration turned into such chaos.”

Those students asked that their names be withheld, to protect personal privacy given the sensitivity of the situation.

The investigation included 26 interviews and statement from university and Prince George’s county police officers, Emergency Medical Services personnel, partygoers, a review of the body camera videos, as well as other footage from those at the scene. The body camera footage will be released Monday, said Brian Ullmann, the university’s marketing and communications assistant vice president.

The department did not discover evidence that the incident was racially motivated, but Mitchell acknowledged that some students feel otherwise.

The police department is implementing systemic changes because the trust of the campus community, “particularly our African-American community,” is necessary for everyone to succeed, according to Mitchell’s report.

“The bottom line is it never should have gotten to this point,” Mitchell said.

Earlier today Mitchell met with some of the students who were involved in the incident to share the results of the review and the body camera footage, Ullmann said.

The students’ statement, along with the police report, provide greater insight into what happened when officers responded to Courtyards on May 21.

Non-university students who were denied entry to the graduation party retaliated by calling the police at about 1:46 a.m. They fabricated the story of a possible fight, someone with a bat and underage drinking, so the department is pursuing criminal charges against the callers, according to the report.

Dark and grainy cell phone videos of police forcefully ending the party while partygoers ran away screaming and coughing went viral on Twitter and elicited a public response from the university the same day.

A video tweeted by Raphael Oduok shows a few officers attempting to restrain someone face down on the ground, which fueled the criticism that police officers employ excessive use of force with black men and women.

As the person tried to crawl away, the officer remained on top of this person, raised his arm and seemed to bring his forearm down on the person’s neck or left shoulder, forcing the person’s head back down to the ground, Oduok’s video shows.

The first pepper spray deployment occurred in the breezeway when an officer was surrounded by about 10 partygoers, one of whom attempted to lunge at the officer while others held the person back. The two officers who deployed pepper spray to disperse the crowd, did so because they believed the other officer was in danger, according to Mitchell’s summary report.

The students’ statement elaborated on this first encounter, and said while partygoers tried to grab their belongings, the officers told them they could come back later for personal possessions and it would be considered trespassing if they didn’t leave the apartment.

“The police then proceeded to mace the entire crowd without warning,” the students said in a statement. “After people were maced, more police officers began laughing and shaking their mace bottles to continue spraying even though people were on the ground screaming and crying.”

Share use of force by UMPD. Email newsumdbk@gmail.com if you had an encounter with UMPD where officers displayed a use of force.

After calling for more support, about 15 officers and fire department medics arrived to help de-escalate the situation and provide care for those who were pepper sprayed. Police arrested two people during the encounter, according to the police report.

While in the parking lot, another officer deployed pepper spray in a manner that violated police policy, but it’s use was justified because of the “uncontrolled scene,” Loh wrote in today’s email.

One man “was maced” when he tried to help some women “getting pushed down to the ground” by officers, according to the students’ statement. At the same time, a woman attempting to help others lying on the concrete who were temporarily blinded by the pepper spray, a male officer grabbed her neck and detained her, according to the students’ statement.

“This incident compels us to confront the reality that African-Americans, and other persons of color, experience bias and unequal treatment in everyday life,” Loh wrote in a previous campuswide email on May 26.

Mitchell said officers could have handled the call with de-escalation techniques, and he is “terribly embarrassed and humiliated” by the actions of the officers. 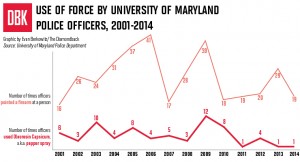 Pepper spray can be used to disperse a crowd if an officer believes failure to disperse the crowd immediately will lead to some kind of violent behavior, Mitchell said. The department will revisit the use of pepper spray under its policy, he added.

“What we hope will come from this incident is a better response from the UMD police force in future situations like these and sense a unity within the campus community,” according to the students’ statement.