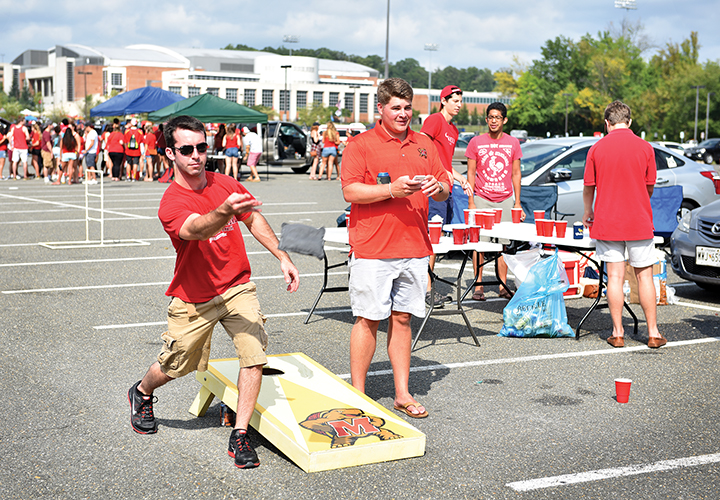 Matt Faulkner, a 2012 almuni, and Scott Luecking play corn hole while tailgating before the Maryland football game against Richmond on September 5, 2015.

Starting next semester, the University of Maryland on-campus tailgate, hosted by the Interfraternity Council, will be relocated from behind Ludwig Field to the university’s practice football fields.

The program, which later expanded in 2014, will expand again, after the athletic department proposed to relocate the tailgate to the football’s practice fields. The initiative to relocate began when Maryland football coach DJ Durkin expressed a desire to move the IFC tailgate closer to the football stadium, said John Zacker, assistant vice president for student affairs.

After meeting with a representative from the athletic department to determine an actual site and any logistics, Zacker said “athletics saw no barriers that we couldn’t work with.”

Zacker and Henderson presented this offer Tuesday to the Board of Presidents, a group composed of presidents from various fraternities at this university. The board unanimously voted to pass the idea.

The athletic department has identified the Greek community as leaders for Terrapins spirit and pride, said Christine Licata, IFC’s programming and advising coordinator within the Department of Fraternity and Sorority Life.

“We want to create this sense of identity around Maryland. This is a big thing, we’ve got a new coach and it’s exciting, and we want to be able to match that,” Licata said. “We can create a fun and exciting student event that gets people excited to support the football team and gets students excited to be at the University of Maryland on a Saturday.”

Although the relocation is still in its early phases, Zacker said IFC will be able to spend less money on operational costs — things such as security and police — and more on programming expenses.

“There are three sides of the field that are already fenced,” Zacker said. “What we’ve really talked about just briefly [is] being able to spend more time on programming, trying to make the event fun and exciting for folks who come.”

Some fraternity members, such as junior civil engineering major Sammy Bernard, think the relocation is a “great idea.” Bernard added that he hopes it will allow for expansion for those outside of the Greek community as well.

“It puts us right next to the football fields; it’s a much shorter walk or bus ride,” Bernard said. “Hopefully with this new location and added space, it’ll be a driving force to get us going to games instead of just going to tailgates and then just going home.”

Student attendance is something IFC President Bryan Pfeffer, a junior accounting and finance major, said he, as well as the other departments involved also want to see improved.

“We want to see a stronger attendance at the football games,” Pfeffer said. “We just want to serve as a game-day model for a safe culture that also promotes Maryland pride.”

More programming details are to be determined, as Zacker, Henderson and other committee members will commence a planning effort to see what sorts of changes and expansions this relocation has to offer.

CORRECTION: Due to an error, a previous version of this story incorrectly stated that the meeting with the Board of Presidents was on Wednesday. This article has been updated.