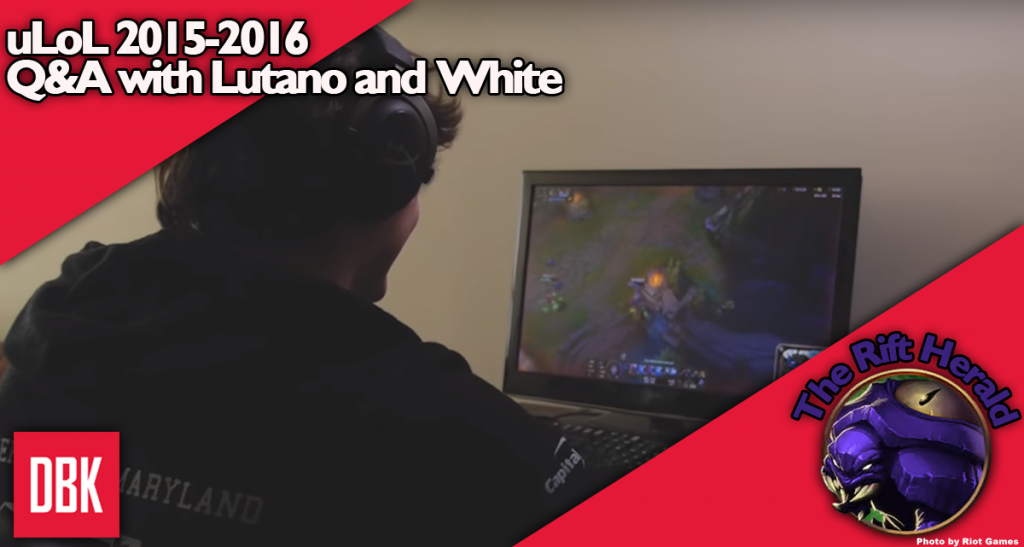 Not many know that the University of Maryland has its own collegiate League of Legends team, and even fewer know that our team made it to the final four out of over 500 schools and played at a gaming convention PAX East in Boston.

The team consists of five players, four of whom are freshman. We have Winston “Tahx” Zhou in the top lane, Jon “Yami” Yang in the jungle, Martin “White” Kwan in the mid lane and Seungkoo “Bustidice” Cho on support. Senior Vincent “Lutano” Alonso is the AD-carry.

The four freshmen came from Thomas S. Wootton High School in Montgomery County, where they together won the High School Starleague tournament in 2015.

Though the team was taken down in semi-finals 3 to 0 by Robert Morris University, making it this far was still a major achievement.

A player from the team was even featured in a short produced by Riot Games.

I got to chat with White and Lutano for a bit about the team and their accomplishments.

DBK: Who are your favorite champs to play?

Lutano: Thresh, dude. [both laugh] Do you want a role specifically, or?

Lutano: Thresh is my shit. I love Thresh.

DBK: How did you guys practice? Solo queue? I know you guys had scrims sometimes.

White: Yeah, it wasn’t too often, I don’t know. Like, once a month?

Lutano: Yeah, at one point we had like, two scrims a week, but that only lasted like, three weeks and then it was like a scrim a month or a scrim every other week, which is like an hour or two hour block, pretty much. Other than that, Jon Yang mostly solo-queued. [White laughs.] Solo-queued for days.

White: The rest of us would dynamic [queue] sometimes.

DBK: Who did you guys scrim against?

White: In the beginning, it was Washington…

Lutano: Yeah, we scrimmed Florida State and OSU…We’re only remembering teams that were good practice.

DBK: RMU and University of British Columbia [the champions for the past two years of the collegiate League tourney] both have esports programs. Do you think the proper equipment, like the computers, the rooms, and whatever, have an impact on skill? If you had those things, do you think you would have done better?

White: Not the equipment, but just like, having a room to ourselves.

Lutano: Yeah, the room would have helped, just for like LAN practice, too. The specific computers and just setting all that stuff up – if we could have practiced on it beforehand that would have been nice, but like, I think the coaching staff at RMU helped so much.

DBK: You guys are all pretty high on the ladder, but does competing in a situation like you guys did change how you see League at all?

White: Yeah, I was pretty nervous at the LAN.

Lutano: Yeah, plus a new set-up that makes you play a little worse, the crowd in front of you – all of that combined makes it a lot different than just sitting there.

DBK: Would either of you guys consider competitive League as a job option in the future?

Lutano: It depends on the team.

White: It’d only consider it if it was a really famous team.

Lutano: Yeah, because to be on an actual competitive team you’d have to drop out of college, and they’d move you to a gaming house, even for challenger series teams. It’s super risky.

DBK: What about after you get a degree? Lutano, you’re about to graduate, right?

Lutano: I don’t think I would still. I mean, yeah if I actually got an offer straight out of college to go on a challenger team or something, sure, but I mean, I think it’s a lot better for my career in general to just go to [computer science] out of college.

DBK: Do you guys have any regrets about competing?

Lutano: I wish I wasn’t ADC! [both laugh] I wish I got to play support! That’s the biggest regret.

White: I just wish we practiced more or like…we were practicing a lot individually, but just not cohesively, I guess. I wish we knew how much more it’d mean if we practiced together.

Lutano: Yeah, that kind of just bit us in the ass against RMU because they had double-[teleport] strats DOWN. They executed their double-TPs 100 percent of the time perfectly. We had never played against a team like that, even in scrims, so that was really hard to adapt to. If we had better practice, we could have put up a better fight against those strats.

White: I don’t regret playing. It was a good experience!

DBK: But you guys have gotten a lot of cool opportunities! Lutano, you were on the thing on the client – the player spotlight. You guys got to go to PAX! Tickets sell out – it’s a huge deal. How was PAX aside from the LAN and stuff?

White: We walked around but…[laughs] I didn’t know any of the games! I was kind of lost. Maybe Vincent knew some of the games…

Lutano: League is life for them. [both laugh] They know no other game outside of League.

DBK: Well there were a lot of League people there. I know Meteos was there, Scarra was there…

Lutano: Yeah, we got to talk to Scarra and Phreak backstage so that was pretty cool. They had set-ups for like everything, but we didn’t go to them because to play at the set-ups you had to wait in like, an hour line. It wasn’t really worth it for us. Also, Winston got a free headset.

DBK: Do you guys have key-pick champs that you think the enemy team would have to ban against you? Your ringers? Is that even the correct term for that? I don’t even know…

White: Yeah, they banned TF but I don’t think that was a good ban…

Lutano: I think it was good. It was for their double-TP strat. That’s why they banned it. It’s like their entire reason why.

DBK: Lutano, I know you have gotten a good amount of Internet flack from the games, but White have you gotten any…I don’t want to say “trolling” but that’s totally what it is…

White: Not on the Internet, but just from like a couple of friends or classmates who watched the stream…but they’re just joking around!

DBK: Lutano, you see it a lot in the League of Legends club! People join the Facebook group and spam pictures of you with stuff on it-

Lutano: One-trick Ezreal! GG! [both laugh] I mean, the reason that happened was just because of the spotlight. I mean, obviously I shittalked them and then I was just a one-trick Ezreal, so I expected it after the Ezreal picks, but we practiced with Ezreal and it’s what we got good results with in scrims, so that’s why we kept picking it. So I have no ra-grets about that.

DBK: Do you guys, aside from Lutano since he’s graduating, see yourselves competing next year?

White: Well before the tournament, I was like, “Yeah, this is going to be my last tournament. I’m done with this game,” but I don’t know. After the tournament, even though we got kind of smashed, I kind of liked that competitive aspect, so I might try for it again. I just don’t know if I’ll have enough time to balance it with school work.

DBK: Okay guys, now I have a FUN question!

DBK: If you guys could be any champion in the game, who would it be?

Lutano: You gotta be TF, man. Come on.

White: Yeah, TF’s cool. He looks like a human.

For more information about the team, you can read what Riot Games wrote on them for the semifinals preview here.

CORRECTION: Due to a reporting error, Seungkoo Cho’s name was misspelled as “Choo.” The article has been updated.