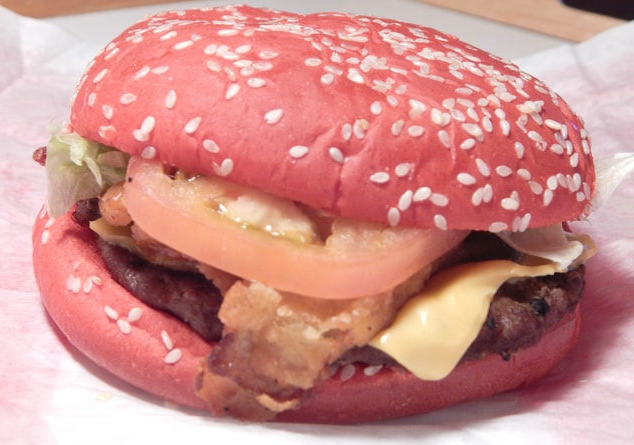 As I walked up to the counter of the College Park Burger King, I briefly forgot the name of what I came to buy.

The cashier knew exactly what I meant.

In late March, Burger King premiered a new take on a spicy sandwich they called the “Angriest Whopper.” This new burger is basically just a regular hamburger with jalapeños, something called “angry onion petals” and hot sauce baked into the bun. Assumedly, there is also an entire bottle of food coloring baked into the bun, because it is an unsettlingly bright shade of magenta.

This isn’t the first time Burger King has decided to drastically change the color of their bread. In October, the chain put out the Halloween Whopper, which featured a jet-black bun. I know what you’re thinking: “Who would choose to spend money on a hamburger that looks like toxic waste?” Well admittedly, I, along with a fair portion of America, decided to try it. As it turns out, the novelty of a colored bun is enough to merit profit. So, out of what I can assume was just consumer curiosity (but probably mostly stupidity) the Angriest Whopper was born.

The Angriest Whopper promises a red bun, but it’s definitely on the pinker side. In person, the sandwich doesn’t look angry at all — in fact, it looks rather sad. Like an aged beauty queen whose once bright red gown has faded into a ratty fuchsia, this burger looked more apathetic than angry.

The red Whopper was also supposed to be exceedingly spicy. The packaging on the sandwich even reads, “I survived the Angriest Whopper” (only at Burger King would you be told not to enjoy the food but to survive it). Against its reputation, the burger wasn’t really that spicy at all. Just to put that statement in context, this is coming from a person who once told a waiter to make their buffalo wings “as mild as the cook is willing to go without them becoming just regular wings.”

There were two thinly sliced jalapeños that I can only assume were spicy. They got caught in the mass amounts of brown goo that defined the sandwich (I later read that this was called “angry sauce”) and promptly slid off onto the floor.

I think the “angry onion petals” were also meant to be spicy. However, I didn’t even see these mysterious petals in the pile of food I was served. Granted, I have no idea what an “angry onion petal” looks like, so they could’ve been in there somewhere.

Remember Moon Sand? Moon Sand was a toy popular in the 2000s that was just sand coated with some sort of hydrophobic compound. There weren’t a lot of rules regarding Moon Sand, but the biggest and most obvious was that you definitely were not, under any circumstances, supposed to eat it. Five bites into the “angriest Whopper” and the thing that once barely resembled a bun now definitely resembled red Moon Sand. It was just burger ingredients, covered in mayonnaise, covered in Moon Sand.

After contemplating the monstrosity that was the top of the burger, I made the horrible mistake of turning it over to look at the bottom. If the top was light fuchsia, the bottom was dark maroon. I don’t even feel comfortable with foods that are naturally maroon (I’ve never met a beet I enjoyed) so this was particularly jarring.

It was after looking at the bottom of the sandwich I decided I couldn’t stomach it anymore. I said goodbye to the only other patrons in the restaurant — a very loud family of five and a boy in a not-so-tasteful graphic tee — and made my way to the door.

Fashion designer Bill Blass once said, “When in doubt, wear red.” In the context of a hamburger, when in doubt, tan will usually do just fine.