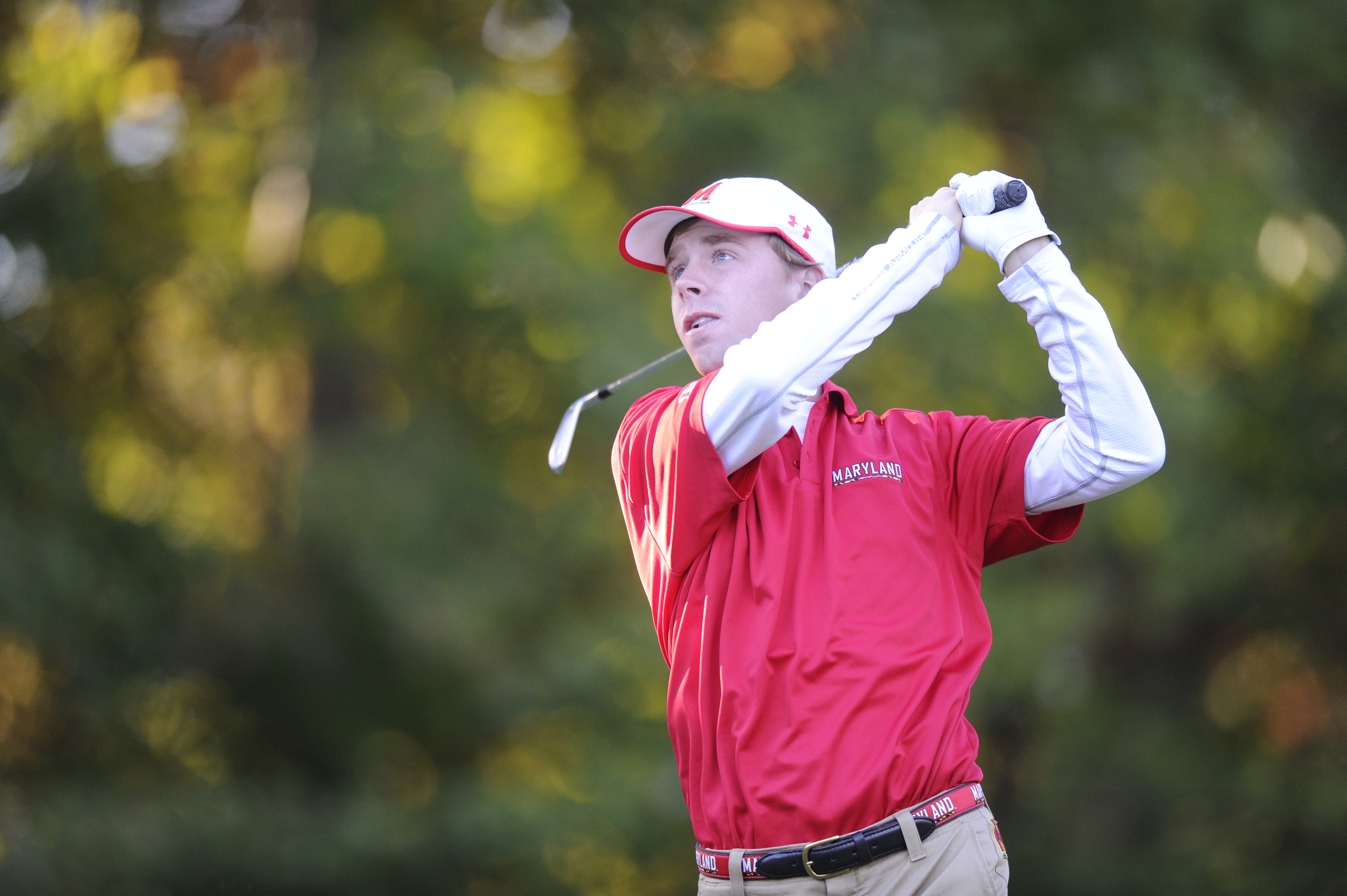 Amid the mix of snow flurries and rain in near-freezing temperatures, David Kocher walked around The Golf Club at Ballantyne in Charlotte, North Carolina, with the wind whipping his bare legs. He’d never worn pants golfing, and he wasn’t going to start now.

Despite the treacherous conditions, Kocher fired a 73 to finish tied for 10th in the 2013 Ballantyne Junior Open that was cut short by the inclement weather. Maryland golf assistant coach Steven Delmar traveled to the course that day to watch Kocher overcome the elements in shorts to shoot a 2-over round.

“I think he just kind of thought this kid is an idiot,” Kocher said. “I ended up playing pretty well and ended up showing him I have a little game.”

While Delmar may have questioned Kocher’s wardrobe choice, the then-high school junior’s performance and even-keeled demeanor impressed. That weekend, Maryland called and offered Kocher a scholarship to come play for the Terps. He would need to learn to play golf in pants.

More than three years later, Kocher is the top golfer at Maryland, securing his first individual win during the fall season at Firestone. And the sophomore is looking to build on his resume this weekend at the Big Ten Championships.

But Kocher’s goals extend beyond his time in a red Terps polo. Maryland is the springboard for his pipe dream of playing on the PGA Tour that seems to become more of a reality each time he tees it up.

“He is just a really, tough, tough SOB, man,” Maryland head coach Jason Rodenhaver said. “I think he’ll make it. He’s got a chance to make it one day. See him on TV. He’s that good.”

Shortly after Kocher learned to walk, he was out practicing at Pinehurst Country Club, which has hosted four U.S. Opens. His grandparents live on course No. 5, so he would head out to hit balls every night when he was there.

The house is situated near a section of four holes that form a loop — three par 4s interspersed with a par 3. As Kocher grew older and his game got better, he would play holes five through eight over and over. By now, he estimated he’s played the loop nearly 1,000 times.

But Kocher didn’t start playing golf competitively until he was about 13. Baseball stood in the way, at least until the summer between sixth and seventh grade.

When he played for a 12-year-old All-Star baseball team, the games were at night, so his coach instructed the kids to stay out of the North Carolina summer heat during the day. Still, he couldn’t stay away from the golf course.

His mom, Rachel, dropped him off at the links in the morning and wouldn’t pick him up until 4 p.m. His devotion to golf became so strong that his baseball swing started to look more like his golf swing.

The right-handed golfer decided to move to the other side of the plate that summer to save his swing.

That only lasted so long. At the end of the summer, his parents sat him down. The sports were expensive. He needed to pick one or the other.

All his friends played baseball, and it would be tough to leave them. But he also acknowledged how strong his golf game was. Years later, he knows he made the right choice.

Sophomore David Kocher watches a chip roll toward the hole during a round at Maryland. (Photo courtesy of Maryland Athletics)

By devoting himself to one sport, he wanted to go all in. After making his decision, he told his dad, John, he needed a new driver. So they drove to Dick’s Sporting Goods and he began testing out new clubs.

It was around that time Kocher nearly beat his dad golfing for the first time. Kocher still remembers his first opportunity vividly. He was standing over a 2-foot putt on the 18th green with a chance to win by a stroke.

Kocher missed. He walked off the green in tears.

He said he hasn’t lost to his dad since.

While Delmar had been impressed by Kocher’s round at the Ballantyne Junior Open, the Maryland coaching staff didn’t expect the freshman to perform like he did when arriving in College Park in the summer of 2014.

As soon as he started playing rounds, though, Rodenhaver and Delmar began to realize Kocher’s ceiling.

“Right away, man, from day one, we knew we had something,” Rodenhaver said.

If the scores weren’t the first tell, his demeanor was. Rodenhaver can never tell how Kocher is playing during a round. And in a sport that requires mental toughness more than most, it’s been an invaluable trait.

His unflappable personality helped him card his best score of his rookie season on the postseason stage. Kocher shot 2-under at the Big Ten Championships in the spring to finish in a tie for third — his best finish of the season.

Just more than five months later, after a summer in which he finished tied for second in the Carolina Amateur, Kocher was sleeping on the lead at the Firestone Invitational entering the final round. He stepped up to the par-3 17th in the final round and dunked his approach in the water.

With his lead in jeopardy, he stuck his shot from the drop zone to about 20 feet and drilled the putt to escape without any further damage. And on the 18th, despite making a three-putt par, Kocher held on to win by a stroke for his first college win.

“There are a lot of guys living in mansions on tour that don’t win anything,” Rodenhaver said. “They are hard to come by. I think in the history of the program, the record is five wins, which I think he could potentially get there.”

Part of the driving force behind him is his best friend, senior Tom Harris. They lived together last year and still room with each other when the team travels.

In practice, the pair encourages each other to shoot lower, though trash talk is often at the center of it.

“They got a little banter going on,” Rodenhaver said. “They talk a little nonsense to each other, which is wonderful. You always want to have someone pushing you, and Tom’s able to do that.”

The tournament before Kocher won at Firestone, Harris entered the final round of the VCU Shootout holding a dominant lead. He was up six shots on Kocher, but Kocher didn’t care. He was going to beat Harris’ score that day.

Playing one grouping apart, the pair went back and forth over the final day of the tournament. While Harris won the event, Kocher drained about a 30-footer on the 18th hole to best Harris in the last round.

“Tom still won the tournament, but that’s all David could talk about is that ‘I finished second but I got you today,'” John Kocher said.

Sophomore David Kocher holds up his plaque after finishing second in the VCU Shootout. (Photo courtesy of Maryland Athletics)

For a while, college golf was only a dream for David Kocher. When he shot par at age 13, it seemed more possible. When he finished second in the state as a sophomore in high school, his parents began reaching out to college coaches.

When his dream finally became a reality as a junior, another one started to form. Kocher realized he didn’t want to spend his future sitting at a desk. That wasn’t him. After qualifying for the NCAA Regionals as a freshman, Kocher began looking beyond college.

“There’s no reason for me not to turn pro after college,” Kocher said.

For so long, playing on the PGA Tour never seemed plausible. His dad always knew his son had a good golf game and figured Kocher would be a good amateur who’d win a lot of member-guest tournaments one day.

That was it, though.

“I used to think that’s just crazy talk,” John said. “I never used to watch tournaments and think, ‘Oh my gosh, my kid could do this.'”

Added Rachel: “That wasn’t a possibility, but now we are starting to see it.”

As the conversations in the family have turned to what tour he’d like to play on and where he wants to live after college, John sometimes thinks about how nice it would be to have “a normal kid.”

But Kocher is far from it. He has the 68th-best scoring average among all Division I golfers. And Friday, he’ll tee it up at the Big Ten Championships looking to top his third-place finish from his freshman year.

His long-term vision is one tournament closer.

“It’s still a dream,” John said. “But it’s one that looks a little more achievable.”