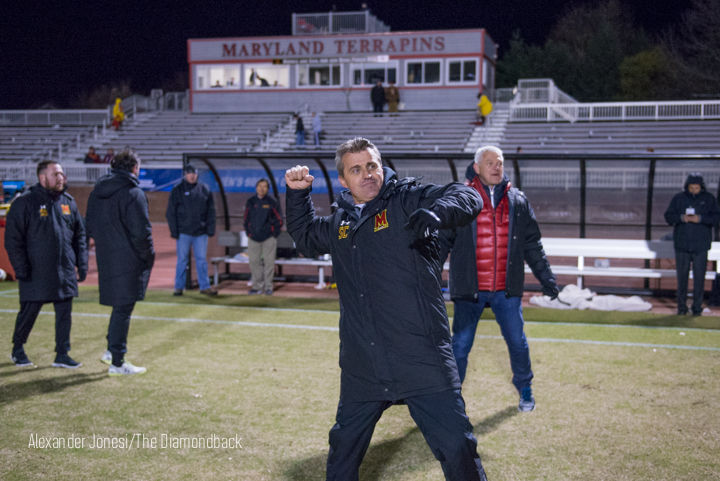 When Terrapins men’s soccer coach Sasho Cirovski turned down a contract to play professional soccer in Scotland at age 17, he did so because he “fell in love with” the opportunity to play at a high level while furthering his education. So he chose to attend the University of Wisconsin-Milwaukee and play four years there before testing his skills in the professional ranks.

He admires the college game, using words such as “pulse,” “glue” and “heartbreak” when describing what it means to soccer in this country. But in his mind, college soccer hasn’t reached its potential — in large part because of its schedule. The regular season is packed into two and a half months, concluding with a championship game in frigid December.

So inside Eaton Theater at this university’s journalism school Tuesday night, Cirovski rounded up several esteemed individuals in the field to discuss the possibility of splitting the soccer season into two semesters. The move, Cirovski said, will help eliminate some of the problems he and countless other college men’s soccer coaches have dealt with over the years.

“We’re slowly starting to understand that we have to do this game justice,” Cirovski said. “This is an incredible sport, this is a global sport, but it’s stuck in neutral.”

The panel, titled “The Future of Soccer: The College Game,” included a mix of coaches, NCAA executives and media members. While topics varied from wage discrimination between U.S. national teams to the debate on playing high school versus club soccer, the sport’s scheduling conflict dominated the discussion.

But will this proposal ever become a reality?

“At some point, it will,” said Oliver Luck, NCAA executive vice president. “It might take time.”

Cirovski said the soccer season, including playoffs, is “pigeonholed” into about three months. This limits the amount of time during the year to train, which North Carolina women’s soccer coach Anson Dorrance said is vital to player development. Dorrance said the format college soccer uses can be referred to as the “tournament culture,” a model adopted in 1959 when the NCAA first decided to hold a national championship.

And it’s a set-up that has led to complaints about the development of American players for the past 15 to 20 years,

“Over the course of a 90-minute soccer game, each player is touching the ball for an average of three minutes,” said Dorrance, who has led the Tar Heels to 21 national titles. “There is no way in a tournament culture — where you’re not training but just playing games — where in those three minutes are you go going to develop into an elite soccer player.”

Terps goalkeeper Dayne St. Clair, who attended the panel, also weighed in on the topic, saying his team’s focus is from game to game.

“We don’t really get a chance to perform and basically push yourself in training,” said St. Clair, who hasn’t heard anyone oppose the idea of extending the season. “You don’t want to push yourself too hard that you can’t perform in the match.”

Another problem involves academics. Cirovski said traveling, sometimes multiple times in one week, can cause players to lag behind in classes during the fall semester. Absences would still be an issue under the new schedule, St. Clair said, but they would balance out over the entire school year.

Last season, St. Clair played for Vaughan Soccer Club in Ontario, Canada. His team mostly played in the spring and summer, as freezing temperatures prevented the squad from playing in the wintertime.

But that hasn’t stopped the NCAA from scheduling the soccer championship for early December. Sometimes, Cirovski said, it’s hard to convince his family to support him at these games because of the frigid temperatures.

The final weekend of the sport must also compete with college football and the NFL in addition to the NBA and college basketball, which are both in full swing by the end of the college soccer calendar.

18 million other sports are going on in the middle of December,” Cirovski said.

The Washington Post‘s Steve Goff, who has covered soccer regularly for more than 20 years, said college soccer gets lost in the media landscape because of the timing of its championship. Having the season stretched over two semesters would move the playoffs late in the spring.

NSCAA Programs Director Rob Kehoe said 75 percent of men’s college soccer players and 90 percent of coaches are in favor of the change. Cirovski called the move “the biggest no-brainer of all time.”

But for athletic directors, Luck said, there are questions that come along with this transformation. Will there be a field available? Is there a sports information director for the second half of the season? In fact, out of all of the athletic directors who work at programs that carry men’s soccer, Luck said less than 50 percent would be supportive of the modification.

When the idea started, Cirovski understood making a decision would be a long process. He plans to keep pushing the initiative, though, for the benefit of his team and the sport as a whole.

“It’s a beautiful game, and it needs a chance to blossom,” Cirovski said. “This is the right thing. The statistics show it, we know it, and I think it’s time to continue this dialogue.”