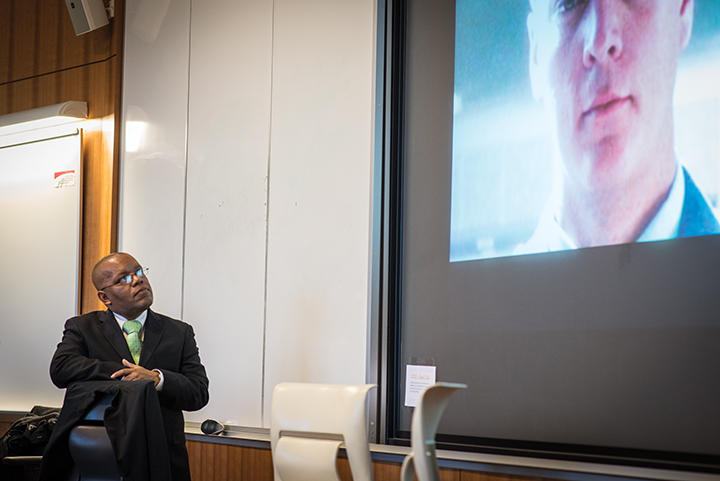 Jayson Blair, A former student of Philip Merrill and Editor and Chief at The Diamondback, Watches a clip from the documentary about him and his actions at the New York Times.

A former student who attended the University of Maryland from 1995 to 1999, Blair made national headlines in May 2003 when news broke that he’d fabricated and plagiarized at least 36 articles during a six-month period for The New York Times, where he’d worked for nearly four years. Fabrications were also found in his earlier articles for the paper.

About 45 students and faculty of this university’s journalism school sat in on yesterday’s one hour, 15 minute-long panel discussion on plagiarism and ethics between Blair and senior American studies and journalism major Shannon Gallagher, who invited him to visit — his first time speaking to journalism students at this university — for a JOUR300: Journalism Ethics project.

Though Blair had not returned to the journalism school since the scandal broke and often rejects speaking appearances, this time was different, he said.

“It’s nice to be back; I wanted to be back,” Blair said. “One of the things I try not to do is turn down opportunities to speak to journalism classes. It sort of feels like a piece of my penance.”

The majority of the panel discussion consisted of Gallagher, who works at The Diamondback, asking Blair questions on topics such as his days at the journalism school and The Diamondback — he was a news reporter early on and editor in chief from 1996-97 — to his downfall at The Times, the aftermath and how his life has changed since then. Additional audience questions came at the end.

“I was very pleased with our student body,” said Adrianne Flynn, the journalism school’s internships and career development director, who teaches the ethics course Blair visited. “I am pleased that they asked tough questions of someone who should be held accountable for what he did to my business and my school. [Blair] handled it with respect and discipline.”

Blair, who now works as a life coach in Virginia with focuses on mental health and career coaching, maintained he was not aware of any plagiarization or fabrication prior to the Sept. 11, 2001 terrorist attacks, when he pulled a man-on-the-street interview verbatim from the Associated Press.

“I would periodically go through these periods where I was like, ‘OK, this is the last one. … I can’t do this anymore,'” he told the audience. “I would opt out of working if I could, and then it would switch back. Once you slide down the slippery slope — once you cross that line — it just becomes very easy to do it over and over again.”

While at The Times, Blair “fabricated comments … concocted scenes … lifted material from other newspapers and wire services,” according to The Times‘ more than 7,000-word internal investigation published after Blair’s departure.

Blair noted he was diagnosed with bipolar disorder some time after the scandal and had “poor health” that involved drug abuse while working at The Times. For Olive Reid, the college’s associate dean of student affairs who knew Blair personally, his health problems were apparent even as an undergraduate.

“Jayson didn’t sleep a lot. I remember him calling me once at 2 in the morning saying, ‘Do you know the back door of the journalism building is unlocked?’ and I was like, ‘No … why do you know that?'” Reid said. “I guess there were signs, but we didn’t know. We just thought he was eccentric.”

Former 1994-95 Diamondback sports editor Tom Madigan, who worked with Blair, said that even as a Diamondback reporter Blair “didn’t always have his details nailed down” and sometimes “information that he’d find for his stories couldn’t be verified.”

“He’s still kind of a joke among people I went to school with,” said Madigan, now a member of the board of directors for Maryland Media Inc., The Diamondback’s parent company. “He’ll always be Jayson Blair to me. He is that guy.”

Even when he knew what he was doing was wrong and felt out of control, Blair said he couldn’t bring himself to quit The Times, because “when you find your way at a place like The New York Times and it’s where you sort of dreamed you wanted to be … you can’t imagine being anywhere else,” Blair said.

For sophomore journalism major Toyin Akinwande, the panel discussion offered a different look at what she once thought was black and white.

“Seeing his perspective on why he did it kind of opened my eyes to just how easy it is to cross the line,” she said. “Everything a journalist is, it’s a lot of pressure.”

Other students weren’t as willing to give Blair the benefit of the doubt. Some audience questions to Blair included whether students could trust what he was saying, whether he’d made amends with former colleagues — he’s tried, with varied degrees of success — and whether his cheating was a matter of pure laziness.

“I’m not trying to be cruel; I get a sense of laziness … just not wanting to get out there,” said sophomore journalism major Tristan Madden.

“Jayson, are you sorry that you did this?”

Blair said he is.

“It kills me personally that it damaged the profession,” he said. “The part that really kills me is the people who I hurt … who had done absolutely nothing wrong.”

CORRECTION: Due to an editing error, a previous version of this story stated Blair visited the campus Tuesday. He came Wednesday. The article has been updated.