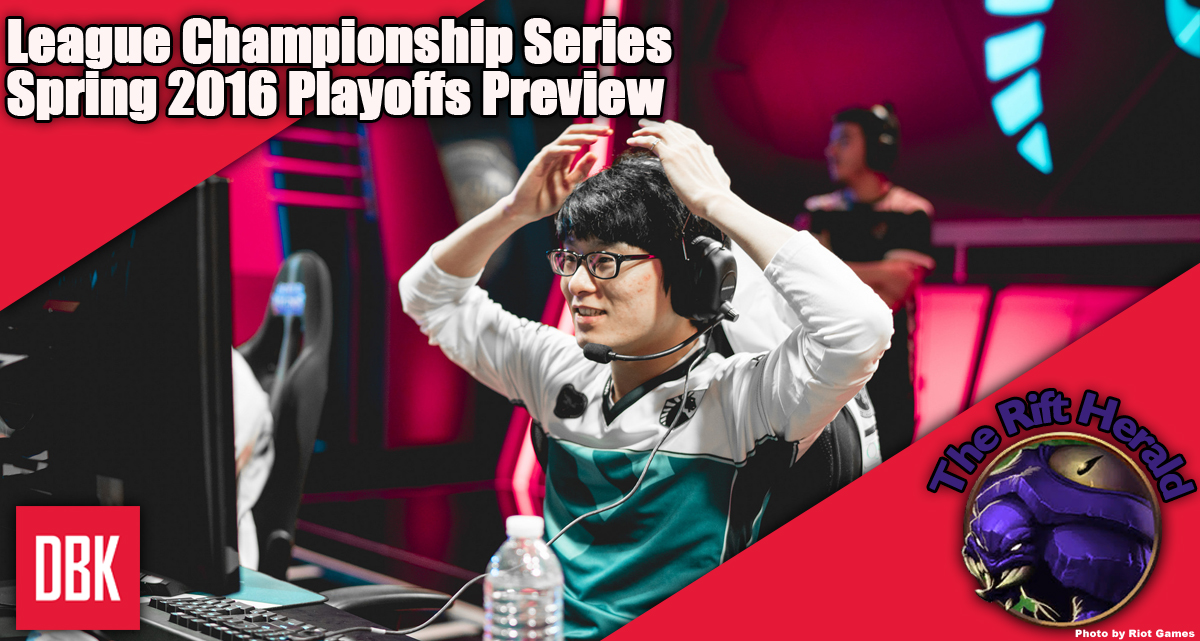 The start of the North American LCS Spring split was rough, and by rough, I mean it was a snooze fest. Teams were getting stomped, and there was a clear division between who was going to end up on top and who was going to be relegated. However, as the split continued, teams began to improve, whether it was through a change in strategy or a change in roster.

With the playoffs just around the corner, I’ve compiled a list of players to watch.

Oh, how I tried to make this list IMT-free. While it’s fairly obvious that IMT as a team deserves every spot on this list, I was going to keep them off of it for the sake of not pointing out the obvious. Huni slipped through. In a world where hard-carrying top-laners exist, Huni is king.

Previously playing for Fnatic last season, Huni loves to break out the hyper carrying champions as opposed to the tanks or utility. (Not to say that he can’t. Does nobody remember when he played Lulu?) He shone particularly on Quinn, Ekko and Graves. Did he ever break out the boring tank Dr. Mundo or Trundle pick? No; Huni was always ready to throw IMT on his back when they needed him to. He sported two pentakills this split, and he’s bound to grab another by the time finals end.

Rush is known as the king of the Korean solo queue ladder, taking the No. 1 spot. Since then, he moved to North America to play for Team Impulse, and he then moved to Cloud9, taking the Meteos’ place. He’s flexible when it comes to champion pool and is able to pick a tanky utility champion like Gragas or Nunu while also being able to play a dirty Nidalee. Though his win rates on Lee Sin and Nidalee aren’t the highest, he makes impressive plays and does fairly well on both, sporting a 3.95 KDA on Lee Sin and 3.25 on Nidalee.

Formerly known as Ganked By Mom, GBM came to North America this split from Korea’s Jin Air Green Wings. He’s played 12 different champions throughout the split to flex his impressive champion pool. His Zilean pick was feared as he showed that the old man could do some sweet work on the rift. While NRG didn’t have the perfect start of the split, the team can thank GBM and Impact for their good synergy and carrying.

Ah, yes. Piglet, formerly of SKT T1 in Korea and winner of the Season 3 World Championships. The pressure has been on and the expectations have been high for the ADC, but after a few rocky games last season, he’s adapted to Team Liquid’s style. Though he’s known for being a nasty Vayne, he’s played tons of Lucian and Caitlyn this split, along with others. His impressive champion pool makes him hard to ban against. Take one thing away from him, and he’ll come back with another strong pick.

Yellowstar is a diamond in the rough. He came this split from Europe’s Fnatic after having a dominant season and is now on the 6th place TSM with little synergy. That’s not the point. Yellowstar’s potential to carry his team to victory is still there. His 2.94 KDA is low for a support, (he has nothing on IMT’s Adrian), but his performance on Alistar is something to behold. If he can get his sh*t together with the rest of TSM, he’ll be legendary yet again.

Unfortunately, none of these players are actually from North America. They’re all from Europe or Korea, but hey, one day we’ll be great. (Nervous laughter.)

Is Immortals probably just going to beat everyone? Yeah, but we can hope for an upset, right?

For more statistics, you can always check lolesports.com.

And remember: Just because a player performs poorly with a team, doesn’t mean that the player himself isn’t good.