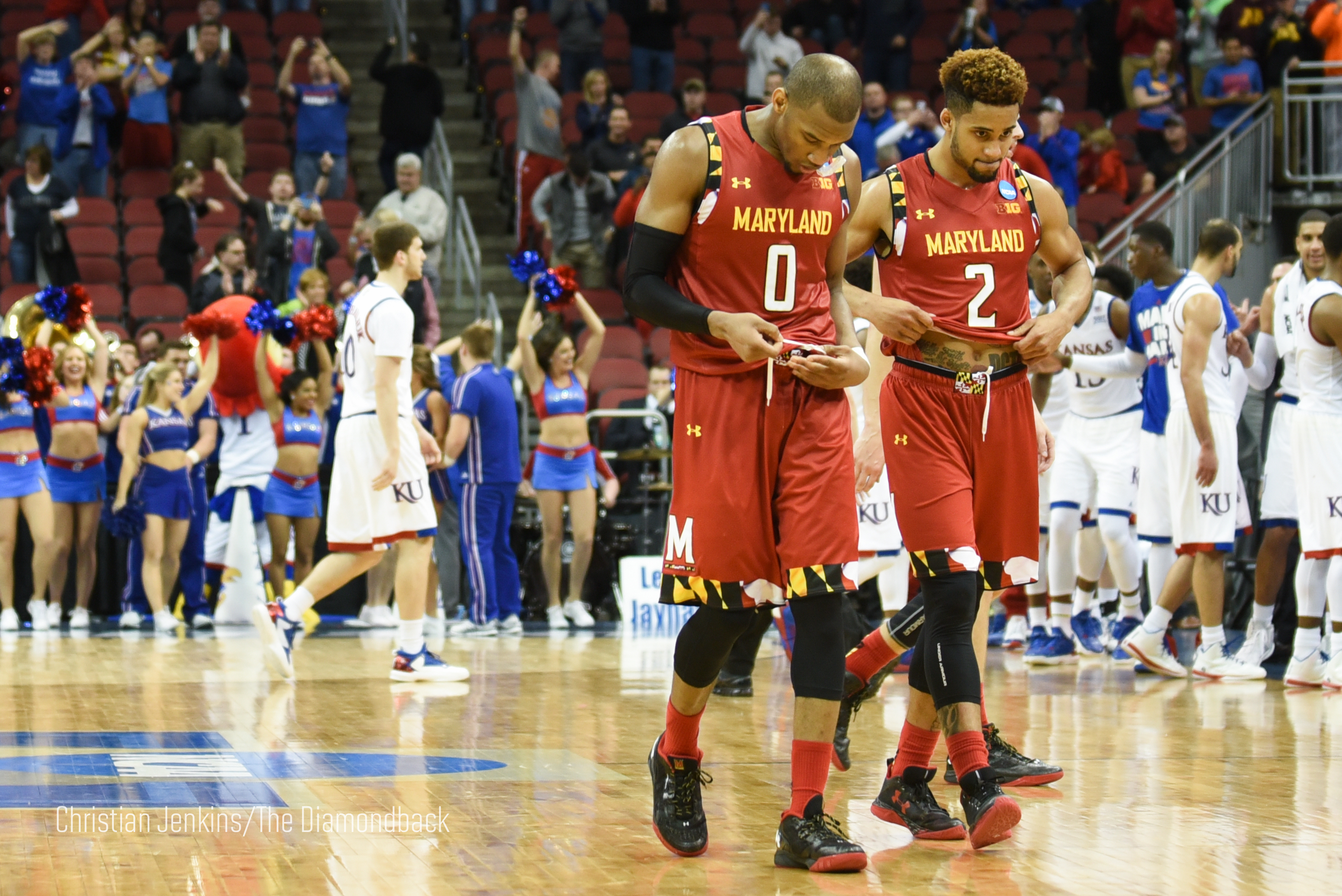 Guard Rasheed Sulaimon and Melo Trimble fiddle with their uniforms as keep their heads hung when the Terps lost to Kansas, 63-77, in the Sweet Sixteen at the KFC Yum! Center on Mar. 24, 2016. (Christian Jenkins/The Diamondback)

LOUISVILLE, KENTUCKY — Terrapins men’s basketball guard Rasheed Sulaimon couldn’t take his gaze away from the scoreboard. His college career had ended minutes earlier with a 79-63 loss to Kansas. So when Sulaimon plopped down in his seat on the raised dais, the replica scoreboard hanging on a wall in the pressroom caught his attention.

The senior stared at the bright numbers that confirmed the Terps’ Sweet Sixteen defeat. He was distracted when senior forward Jake Layman patted his right shoulder. Sulaimon and Layman wrapped their arms around each other’s shoulders for a few seconds.

Sulaimon’s gaze then returned back to the scoreboard. He didn’t look away for about a minute. It was as if Sulaimon didn’t want to believe that this season, which started out with Final Four expectations, had ended. But it had.

“I thought this team really had a chance to go all the way,” Sulaimon said. “Walking off the court, the first thought in my mind was shock.”

Despite a team-high 18 points from Sulaimon, the No. 5-seed Terps couldn’t upset No. 1-seed Kansas in the Sweet Sixteen at the KFC Yum! Center. The Terps, who began the season No. 3 in the preseason Associated Press poll, couldn’t contain Jayhawks forward Perry Ellis. Behind Ellis’ game-high 27 points, the No. 1 overall seed in the NCAA Tournament pulled away in the second half, outscoring the Terps by 14.

Kansas will face No. 2-seed Villanova on Saturday as the Terps miss out on making their first Elite Eight appearance since 2002.

“We lost to the best team in the country,” coach Mark Turgeon said. “They’ve just crushed people lately. And in the end, it looks like they crushed us.”

The Terps’ starting backcourt led the way Thursday. Sulaimon and sophomore Melo Trimble scored the Terps’ first 14 points and finished with a combined 35. Trimble (17 points) went 5-for-16, though, and the duo went 3-for-14 on 3-pointers.

While the Terps guards carried the offense Thursday, Ellis was even better. The 6-foot-8 senior had 27 points, went 10-for-17 from the field and was a perfect 7-for-7 from the free-throw line.

“I don’t think he forced things tonight,” Turgeon said. “We knew he was driving right, and we still couldn’t guard it.”

Redshirt junior Robert Carter Jr., who was on Ellis for most of the night, finished with eight points, two assists, five turnovers and three fouls. Freshman center Diamond Stone didn’t fare much better. He had just one more point (five) than fouls (four).

Rebounding, an issue throughout the season, hurt the Terps again Thursday. The Terps were outrebounded, 43-28, and the Jayhawks turned 13 offensive rebounds into 13 second-chance points.

Early, though, the Terps looked like they could knock off the No. 1 overall seed. After a Sulaimon 3-pointer less than 30 seconds into the contest, the Terps led for most of the next 14 minutes.

Despite the Terps’ Elite Eight drought, Sulaimon was the only player on the court that had advanced past the Sweet 16 before Thursday. The graduate transfer was part of Duke’s 2013 run to the Elite Eight.

So the Terps leaned on the veteran early, and the Jayhawks started 4-for-18 from the field. Behind Ellis, however, Kansas took a 36-34 lead into the break. The Terps would never lead again.

Early in the second half, the Jayhawks used a 7-0 run to stretch the lead to nine.

During the middle of that crucial spurt, Kansas guard Frank Mason III bumped into Sulaimon on his way to the Jayhawks’ bench. Sulaimon immediately turned around and shouted in Mason’s direction and then motioned toward the referees, perhaps wanting a technical. Nothing was called, though, and even Sulaimon couldn’t stem the Jayhawks’ momentum.

That run put the Jayhawks up 52-43 about five minutes into the second half. The Terps cut never got closer than six the rest of the way.

“We had a lot of open looks,” said Layman, who finished with eight points. “Just didn’t make them tonight.”

After Sulaimon and Layman answered a couple more questions from reporters, they got up and walked off the dais and returned to the locker room. More cameras and microphones awaited them there.

Soon, a large gaggle of people crowded around Sulaimon while Layman stood nearby unoccupied. Layman stared at his teammate, transfixed like Sulaimon was by the pressroom scoreboard.

Finally, Layman looked away and trudged past Sulaimon.