College Park bike-share program to launch in May 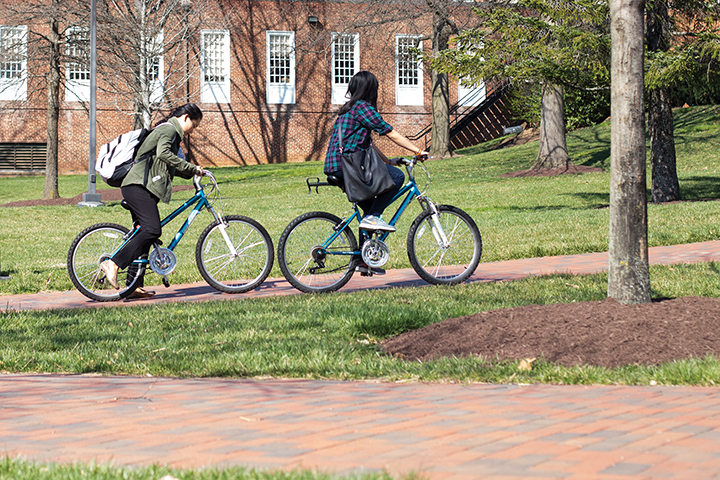 UMD students often use bikes as a fast and easy way to get around campus.

A long-awaited bike-share program will become a reality this spring when 14 bike stations are installed across College Park, said Terry Schum, the city’s planning director.

Starting May 4, 120 bikes will be available for use at seven bike stations on the University of Maryland campus and seven stations in the city. Schum said that while the locations are not yet finalized, people can expect to see stations in downtown College Park, the College Park Metro station, Domain College Park on Mowatt Lane, the Hollywood neighborhood and Northgate Park just south of The Varsity.

“People are very much looking forward to this system,” Schum said. “We’ve been talking about it for four years, and it’s finally coming to pass.”

The City of College Park and this university received a $375,000 grant in 2012 from the state to operate a bike-share program. A plan to bring Washington-based Capital Bikeshare to College Park was derailed in 2014 when the company that manufactured the bicycles filed for bankruptcy. Instead, the city and university partnered with bike-sharing company Zagster, a company that has been successful at other universities such as Duke and Ohio State.

“When our contract with Capital Bikeshare didn’t work out, the city took the lead in going out to bid to request proposals from bike-share vendors, which we did,” Schum said. “Joint leaders in the city and university conducted interviews and selected Zagster as our vendor.”

Each Zagster bike is equipped with seven gears, LED lights, a bell and a basket, according to the company’s website. Cyclists will be able to book a bike online, via text or with the Zagster app.

“We still have not finalized what the [payment] structure is going to be, so that will be something we’ll be working on for the next couple of weeks with the city to figure out what that’s going to look like,” said Anna McLaughlin, Department of Transportation Services assistant director.

At Ohio State University, where Zagster launched last year, the student rate is $35 per year and the public rate is $75. Additionally, 24-hour passes are available to purchase for $6 a day. Users can rent a bike for up to one hour on weekdays and three hours on weekends.

Bike-share programs have become increasingly popular in the Washington area since Capital Bikeshare launched in 2008 and expanded to areas in Northern Virginia and Maryland. The trend has spread to several college campuses in the region, and McLaughlin said officials are looking at these schools as models.

George Mason University in Fairfax, Virginia, had a successful system called Patriot Bikeshare for a year in 2012 before the company that operated the program went out of business.

Joshua Cantor, the director of parking and transportation at George Mason, said the university has a Capital Bikeshare station at its Arlington, Virginia, campus and is working with Fairfax to create a joint bike-share program, similar to the program in College Park.

“What we found with our campus is that more stations including off-campus were highly desirable,” Cantor wrote in an email.

Junior Emily Himmelfarb said she wasn’t sure she would pay an annual membership fee for a bike-share program, but she would consider a day pass option.

“I have my own bike at home, and so I could just choose to bring it if I was going to use my bike regularly,” the finance major said. “If I needed to get somewhere really quickly or if I wasn’t feeling like walking all the way, I might be willing to pay.”

For students who already own a bike, the bike-share program might be less appealing, freshman criminology and criminal justice major Fatmata Sesay said. DOTS allows students to register a bike on the campus for free.

“I feel like people would use it, but some people already have their own bikes, so what would be the point of using someone else’s?” Sesay said.

McLaughlin said the university is still working with the city to finalize all of the details of the program before the launch date.

“We’re really trying to get it running this spring, and it’s been a struggle,” McLaughlin said. “We’re excited to get it operational before everyone leaves for the summer.”