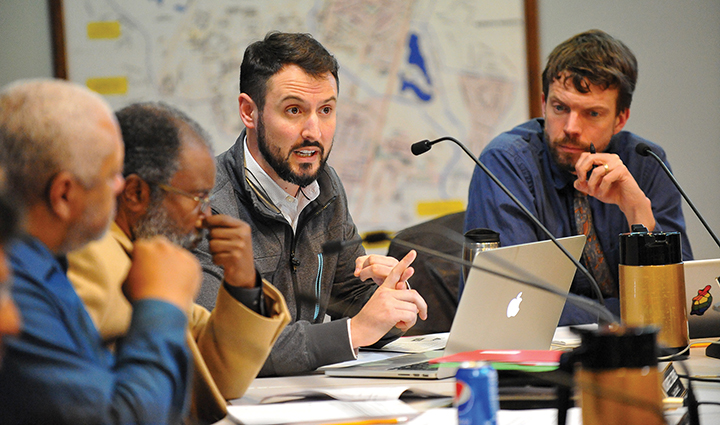 Councilmember P.J. Brennan speaks during a council worksession on Feb. 2, 2016.

In 2013, Poushra Alfaroukh and her family — her father, mother, five brothers and sister — left their home in Syria in search of a better life.

“Everyone around us was dying,” Alfaroukh said. “My family had nothing to eat and no water to drink. It was hard.”

They arrived in Baltimore in 2014 before moving to College Park, where Alfaroukh said the community welcomed them.

“We are so happy, and we want to say thank you to College Park,” she said. “I want to help other families now.”

After more than 140 residents signed an online petition, the College Park City Council voted Tuesday night to pass a resolution welcoming all refugees, including Syrians, into the city. The vote passed 7-0, with no abstentions.

Various community members and supporters, including Alfaroukh, spoke at the meeting.

Jackie Pearce Garrett, a University of Maryland alumna and a resident of College Park for almost six years, started this petition to show the community’s willingness to help immigrants looking to start a new life.

“There is obviously no dispute about the refugee crisis, and the U.S. should be committed to bringing in refugees,” she said. “This resolution would show that our community is willing to help, and we’re certainly an option that they could look at.”

However, in November, Maryland Gov. Larry Hogan, along with 30 other governors across the nation, asked President Obama to halt the resettlement of refugees in their states until it was clear they did not pose any threats to public safety.

“It was expressed that Maryland is not open and welcoming to a diverse population and to specific people,” District 2 Councilman P.J. Brennan said. “This is such a diverse area, and we need to further support diversity, acceptance and openness.”

There is no current cap on the number of refugees who can resettle in College Park, and it is important for this city to welcome all people, Brennan said.

District 3 Councilwoman Stephanie Stullich said though she expects some fear of terrorism to enter the country with new immigrants, she said immigration is highly unlikely to lead to terrorism.

“There is a very detailed vetting process, and people entering the country aren’t the greatest risk,” Stullich said. “I understand that people have fears, but these people are victims of terrorism.”

Sophomore finance major Jack O’Krepkie, accountant of the University of Maryland Progressive College Republicans club, said while the organization supports the resolution, “we need to make sure [immigrants] are who they say they are.”

Those who oppose the resolution also argue the city should be spending its time improving the lives of its residents before addressing another problem, Pearce Garrett said.

The nation has experienced a number of acts of terrorism, including the December attack in San Bernardino, California. As a result, some College Park residents faced backlash because of their race, making them feel less welcome in the area, city resident Hena Zuberi said.

Zuberi, the editor in chief of MuslimMatters.org, an online magazine highlighting issues Muslim people face, said there were multiple instances in which immigrants or Muslim people were targeted after the San Bernardino attack.

“A young man was attacked in his place of work; a woman walking her daughter to school was told to go back home. … There are a lot of racial epithets going around,” Zuberi said. “People call us ISIS on a daily basis here … [and] we are not ISIS.”

Before they voted, several council members, including Brennan, Stullich and District 4 Councilwoman Mary Cook, expressed their support of the resolution and welcomed the Alfaroukh family into the College Park community.

“I’m only sorry that we didn’t do this sooner,” Brennan said.

Although College Park Mayor Patrick Wojahn could not vote on the issue, he did address those at the meeting and voiced his feelings on the subject.