The name Byrd Stadium is no more, but other UMD buildings have discriminatory namesakes, too 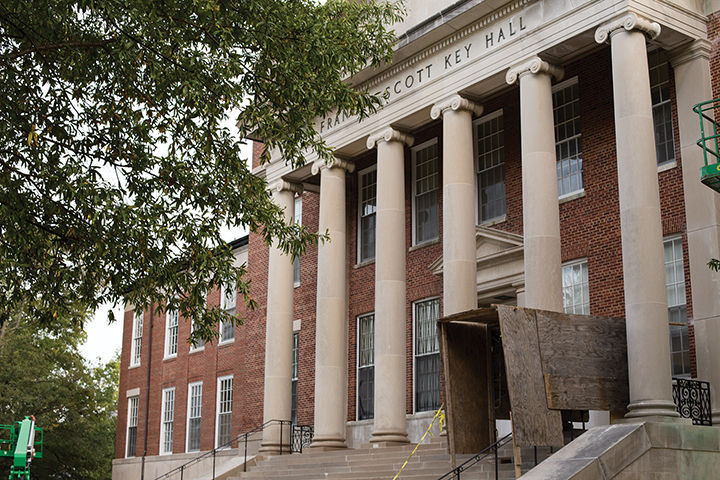 In its Dec. 4 report detailing the arguments for and against changing the stadium’s name, the Byrd Stadium Naming Work Group — which Loh tasked with looking into the name change back in September — noted Byrd Stadium is not the only facility on the campus named after someone who supported racial inequality and discrimination. The group suggested that “the campus might undertake a broader initiative to discuss and debate building names and university values.”

Here are a few buildings named after people who had ties to slavery or racial discrimination.

The work group specifically mentioned Francis Scott Key Hall in its report. Key, who is famous for writing the lyrics to “The Star Spangled Banner,” was also “a prominent defender of slavery” and led an organization that sought to expatriate blacks to Africa in the early 1800s, the group stated.

The Baltimore Sun reported in 2014 that Key owned slaves and was “vehemently opposed to abolition.”

Calvert Hall is named after Charles Benedict Calvert, the principal founder of the Maryland Agricultural College — this university’s predecessor. Calvert also served as a House representative from Maryland from 1861 to 1863 and was “known in Congress as a proponent of slave owners’ property rights,” according to a research guide from the University Archives.

Calvert came from a long line of slave-owning planters and owned 52 slaves in 1860 that worked on his home plantation, according to a 2009 report compiled by university professor Ira Berlin and his students. The report also found that Calvert called upon President Abraham Lincoln to enforce the Fugitive Slave Act, which Congress passed in 1850 to permit the capture and return of runaway slaves.

But he wasn’t entirely wed to slavery. Calvert was a Unionist, and while he was a slaveholder he said in 1863 he was “not so seeded to the institution [of slavery] that I would sacrifice the public will or welfare of my State on the shrine of private or pecuniary interest,” according to university archives.

He also co-sponsored a bill creating a bureau of agriculture that included “a mandate to promote a national agricultural policy that did not include slavery,” and owned no slaves by the time he died in 1864, Berlin’s class report stated.

Charles Hall is named for Charles County, which gets its name from Charles Calvert, the Third Baron of Baltimore. He governed the colony of Maryland in the mid-to-late 1600s, and during his time at the helm the Maryland Assembly officially made slavery legal and ordered that slaves serve for life, according to Maryland Public Television.

The Eppley Recreation Center is named after former university Athletic Director Geary F. Eppley. Eppley received his bachelor’s degree from the Maryland College of Agriculture in 1920 and his master’s degree from the University of Maryland in 1926 before becoming the university’s track coach in the 1930s, athletic director from the mid-1930s to 1947 and dean of men from 1936 to 1964, according to university archives. The university renamed the recreation center after Eppley in 2006 “to honor his many years of service to his alma mater.”

Eppley was serving as athletic director when the university refused to play a football game against Syracuse University in 1937 unless Wilmeth Sidat-Singh, a black player and a star halfback of Syracuse, sat out for the game, according to several Diamondback articles from November 2013. The university paid tribute to Sidat-Singh when the Terps played Syracuse in 2013 to make amends for the racial slight.