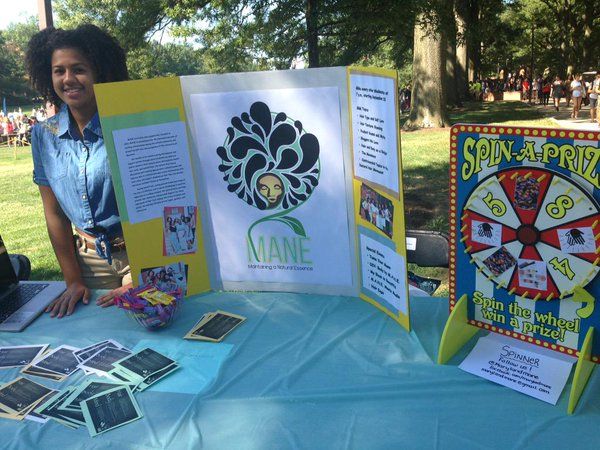 When Ja’Nya Banks came to the University of Maryland, she said, she was often uncomfortable braiding or styling her hair in the communal bathroom of her predominantly white dorm.

But Banks, a sophomore special education major, gained confidence once she found another student in her dorm, Kendra Pryor, who was having a similar experience. Now Banks and Pryor are part of a campus organization formed in 2013 to promote natural hairstyles for black women, as well as self-love and a greater understanding of different beauty standards.

Maryland M.A.N.E. — Maintaining a Natural Essence — grew out of the larger natural hair movement in the black community, said Banks, who is the group’s public relations chairwoman. Natural hair is often looked down on and underrepresented in the media, she said, so girls of color feel obligated to straighten or perm their hair from a young age.

“A majority of their life, they’re kind of told they have to conform to these typical Eurocentric standards of beauty, and when they don’t, they’re sometimes isolated, bothered, just treated differently or poorly — not only from, like, people in outside communities, but even in their own community,” she said.

Banks said her own mother questioned her decision to wear her hair naturally.

While American beauty standards encourage straight hair instead of curly, kinky hair, there has recently been a shift within the black community to embrace their natural selves, said Pryor, the organization’s secretary.

The current natural hair movement started in the mid-2000s with beauty blogs and YouTube videos about how to go natural, said Nicole DeLoatch, a sociology doctoral candidate conducting research on natural hair.

Many women moved away from using hair relaxers after they learned about the “caustic chemicals” — “basically what you find in liquid Drano” — that come with this method, DeLoatch said.

As women changed their hair, DeLoatch said, they also changed their identities and “revalorized” their black features that are often deemed inferior.

“This wasn’t just a hair change, right? No, this was like a lifestyle change,” DeLoatch said. “[It] really just amazed me how women living in a society that values Eurocentric beauty and devalues Afrocentric beauty, how they could say, ‘You know what, I’m gonna take this thing that society hates and turn it into something that I love.’”

Maryland M.A.N.E. holds general body meetings every other Wednesday and is planning three events for next semester: a DIY body products event, a panel of natural hair and beauty bloggers and a “My Black Is Beautiful” discussion during Black History Month, Banks said.

The group also discusses other ways of living a natural lifestyle and “loving the hair you have and the skin you’re in,” Banks said.

“We’re trying to go to a new holistic approach to health and natural living,” said Pryor, a sophomore anthropology major. “Our main focus is natural hair for black women, but the organization is really for anybody who wants to learn about healthy hair, body care and healthy minds.”