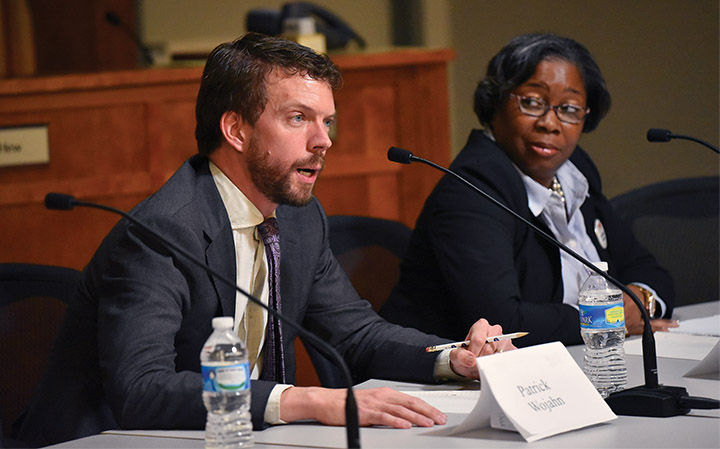 Patrick Wojahn speaks at the mayoral and District 3 debate at City Hall on Oct. 28, 2015.

Patrick Wojahn speaks at the mayoral and District 3 debate at City Hall on Oct. 28, 2015.

In the most competitive election in decades, Wojahn came away with 1,267 out of 2,222 votes, defeating District 4 Councilwoman and Mayor Pro Tem Denise Mitchell.

“I’m humbled and honored people are giving me the opportunity to carry out our goals for the city over the next two years,” Wojahn said. “I want to bring in the community’s vision and show people we’re moving forward.”

The final tally was announced Wednesday after all absentee ballots were counted and all ballots were deemed valid by the city’s Board of Election Supervisors.

Mayor Andy Fellows has supported Wojahn’s run from the beginning. When endorsing him, Fellows cited Wojahn’s experience as a four-term councilman, his proven record of accomplishments and his positive energy.

“More than any other mayor in my memory, he has the ability to bring the whole city together,” Fellows said.

Mitchell said she is “truly humbled” to have served on the City Council for the past six years.

“What am I going to do? I’m going to keep my eye on the council,” she said. “I’m going to be at the podium making my comments.”

READ MORE: What to know about the College Park elections

Wojahn has touted his accomplishments, such as founding College Park Day and forming the Neighborhood Stabilization and Quality of Life Workgroup, throughout the campaign. He plans to continue moving the city forward by bringing more amenities, high-quality developments and businesses to College Park.

“The university is making a historic investment in our city and is on board with turning College Park into a top-tier college town,” Wojahn has said. “I want to see the city that I live in turn into something great, something we can be proud of and that serves all its residents — both students and long-term residents.”

“I like that he is more progressive with working with the University of Maryland to take advantage of the relationship and developing the downtown area,” said Toledo, 25.

Also the director of government relations at Rails-to-Trails Conservancy, Wojahn plans to make it easier to both walk and bike in the city while working to make College Park a more sustainable place to live.

Wojahn will face some challenges moving forward from this highly competitive and divisive election. The City Council he will serve with until he officially takes over as mayor Dec. 7 was evenly split on endorsing him over Mitchell.

Some of his supporters — District 2 Councilman P.J. Brennan and District 3 Councilwoman Stephanie Stullich — were re-elected Tuesday, though District 4 Councilman Alan Hew was not.

“He has a big job ahead of him, and that’s bringing the council together,” Day said. “He’s made a commitment to bringing us back together, and that’s going to be a great thing for the city.”

The College Park community has felt the division during this election cycle — the first time in more than 20 years that every seat was contested. Personal attacks became common on community listservs, and campaign materials were distributed by a man who said he does not “think homosexual marriage is real” and that Wojahn has “his own agenda.”

READ MORE: Creator of campaign fliers says gay candidate has ‘his own agenda’

“In years past, being gay would’ve been an automatic disqualifier for office in the court of public opinion,” said Wojahn’s husband, Dave Kolesar, the first person Wojahn thanked in his speech. “With the younger generation, we all just shrug our shoulders.”

Wojahn said he hopes to heal the divide and work toward unifying College Park. He said his first priority is to meet with all the council members to see what elements of their platforms the council can work on together.

“Whenever we have a heavily contested race like this, it’s going to be a challenge to unite everyone,” he said. “But I’m ready to take on that challenge.”