ART REVIEW: A travelogue through D.C.’s Art All Night 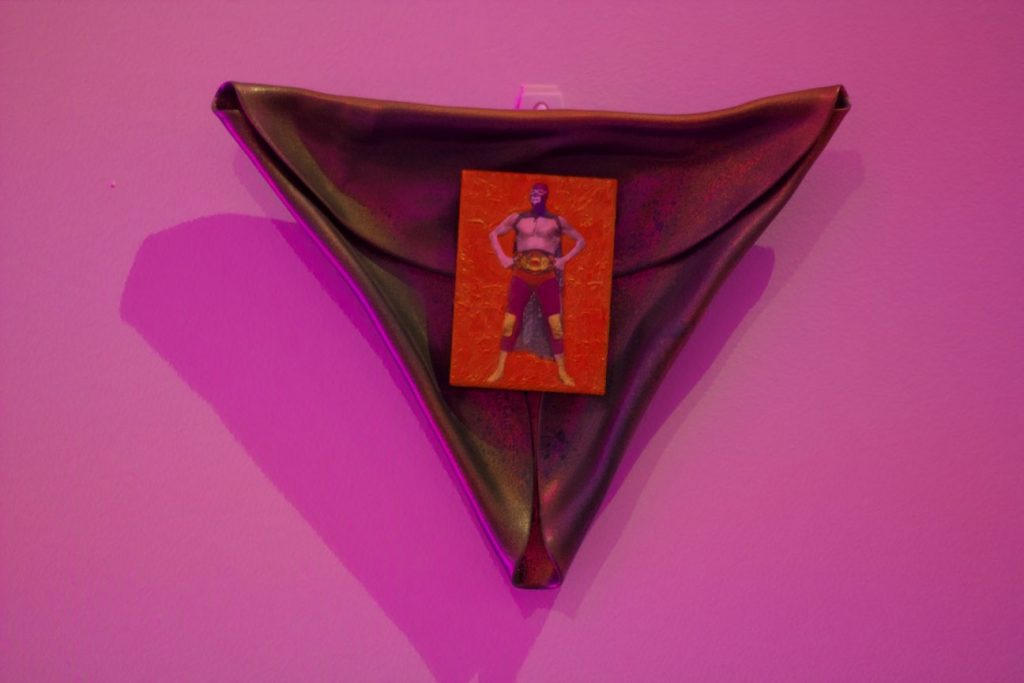 One of artist Brendan L. Smith’s 33 Flipped Sides is a melted vinyl record that looks like a hamantasch cookie stuffed with a Mexican wrestler. (Photo by Julia Lerner/For The Diamondback)

Three women in saris are undulating around the central fountain. Their bracelets jingle as they do, with one woman in a 216-foot garment wrapped around her countless times.

She is pulled and unwrapped — perhaps symbolizing the restrictive nature of longstanding cultural traditions. The aesthetic of the long, airy garment reinforces the other undertone, though: it’s luxuriantly beautiful.

At intervals, another woman grabs the protagonist, played by artist Monica Bose. Is she being protected or subdued?

According to the program, this dance speaks to climate change. But if Pope Francis’ remarks on the issue Wednesday were vague, this is downright inscrutable. Maybe the long sari flooding the plaza symbolizes rising seas. It’s open to interpretation.

What makes Art All Night beautiful is not what is presented but the throngs of captivated visitors who take it in. It’s lovely to see so many people entranced by art.

In the mirrored, molded and impeccably decorated foyer to the Colombian ambassador’s residence, members of the El Tayrona dance troupe are models of classiness and seem to match the grandiose, old-guard room.

The first dance is a two-person seduction of red and white called “San Juanero.” At one point in the brazen drama, the gentleman attempts to steal a kiss behind his perfectly peaked Panama hat. At another, he cheekily lifts the ruffles of the woman’s dress. Have no fear, though: this is a happy dance, and eventually the woman takes his knee.

“Bullerengue,” the third dance, is of African origin and was intended as a debutante dance for newly marriageable young women. The rhythmic jumps and salacious shakes were no doubt intended to accentuate the one taboo undercurrent of all dance: sexuality. The folds and ruffles of the dresses, at one point held above dancers’ heads like a Georgia O’Keeffe painting, recall the folds of something else entirely.

The final dance, the liveliest, is the “Pollera Colorá,” a glorious whirl of red, yellow and blue that places visitors at a Bogota outdoor cafe, not a rainy embassy in Northwest Washington. “¡Viva Colombia!” a man shouts to raucous applause. The atmosphere is electric.

Downstairs from the lobby of this ultra-vogue $200+ per night hotel, artist Jonn Marc is listening to Bebe Rexha on a paint-splattered, olive green ladder. Block letters in blue painters’ tape on the wall outside Marc’s stairwell reads “Live Painting,” and inside, the artist is interpreting the oscillations of his brush onto the beige walls.

Live painting, Marc says, is different from planned artworks. “This is a little bit more interpretive to the space, a little more reactionary to where you are and what you’re doing,” he said.

“It was such a thrilling experience to have the pressure of making it up while people are watching you,” Marc added. “I jumped at it because it was a fantastic adrenaline rush.

“It kind of makes painting more of a sport and less of an artistic pursuit.”

Art at the hotel stretches from the basement to the roof. A nine-floor elevator ride and another flight of stairs transports visitors to a poolside, neon-blacklight rooftop party complete with freshly spun beats from DJ Ausar, a game of giant Jenga, more live painting (this time on canvasses) and a video installation projected on the elevator head house.

There’s too much to describe, but the totality of the party is what gives it appeal: all artsy, all hip, all undeniably fun — with the twinkling Washington skyline for a backdrop. The rain certainly hasn’t dampened spirits (bottled or otherwise).

A Metro ride away, Gallery Place lacks some of the au courant charm Dupont Circle had. On the three-block walk to the library, a fantastic gentleman gleefully announces to our group that he’s “got something — but it ain’t baking soda!”

The Art All Night nexus, though, erases all previous qualms.

The Carnegie Library is alight with knowledge and a video projection by artists Monsieur Arthur and Riki K. “Science,” “Poetry” and “History,” the edifice’s stone-carved mottoes, radiate Prometheus’ fire once more.

In the next room, artist Brendan L. Smith shows his wares: artworks made from spray-painted, melted vinyl records centered around an inspiring object, like humorous, well-framed iconographies. One almost looks like a triangular hamantasch cookie stuffed with a Mexican wrestler.

The night young but the college student tired, Art All Night for me comes to a close. I never quite know how to cover the cacophonous creativity, even in my second year doing so. Perhaps that’s because it’s so radically different from everything in the art establishment.