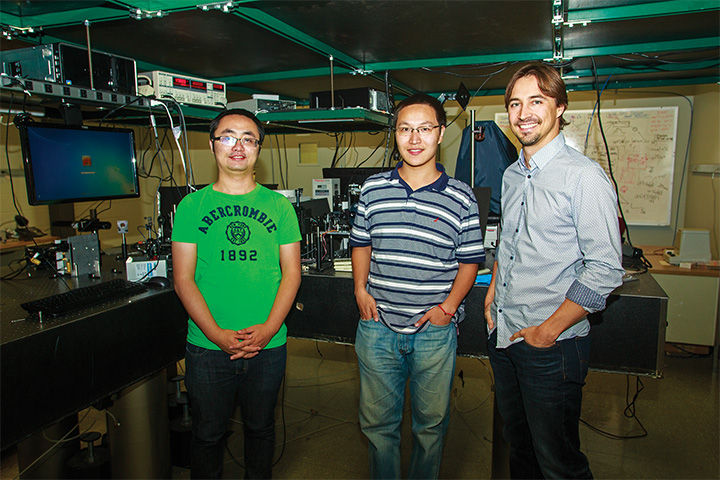 Yunlu Xu (left) and Tao Gong (middle), graduate students studying electrical and computer engineering and professor Jeremy Munday seen in their research laboratory in the Institute for Research in Electronics and Applied Physics.

Yunlu Xu (left) and Tao Gong (middle), graduate students studying electrical and computer engineering and professor Jeremy Munday seen in their research laboratory in the Institute for Research in Electronics and Applied Physics.

Standard solar cells, like the ones found on someone’s roof, can only generate so much power. But thanks to researchers at the University of Maryland, a smaller, more efficient solar cell might soon be available to those who want to generate more energy.

A nanoscale solar cell is very small — or at least has parts that are very small — compared with standard solar cells, said Jeremy Munday, a professor in the electrical and computer engineering department. Research on nanoscale solar cells and their potential efficiency, produced by Munday and graduate students Tao Gong and Yunlu Xu, was published in the Scientific Reports journal this month.

“As a consumer, you’d obviously like to have as much power as possible,” Munday said. “So you can put more solar panels up and they’ll generate more power, but once you’ve filled up your roof and you still want more power what do you do? You could start putting them in your yard or your neighbor’s yard, but that’s not very ideal.”

In recent years, Munday said there have been new questions raised about how efficient nanoscale solar cells could be compared with traditional cells.

“We’ve used the same method but applied it to nanoscale solar cells. … We found that max can be about 42 percent,” Munday said.

Traditional cells can take up a lot of space, Munday said. If the cell is made smaller, a lens is required to concentrate the power.

The goal of developing these nanoscale solar cells, Gong said, is to try to generate the same kind of power using something much smaller.

“In daily life, we just care about generating power. We want the highest efficiency,” Gong said. “These nanoscale solar structures can concentrate the light without the use of that big lens and without taking up a lot of space.”

Now that the research has been done, the next step is to build a workable cell.

Xu said that after a few years of work, the team has found some usable design structures and materials, including semiconductor compounds such as gallium arsenide and indium phosphide.

Munday said they hope to have the first experimental demonstrations ready within the next couple of years. From there, it will take a little longer to see if they can be made commercially viable, he said.

“Really, we’re looking to see if this theoretical efficiency can be made real,” Gong said.