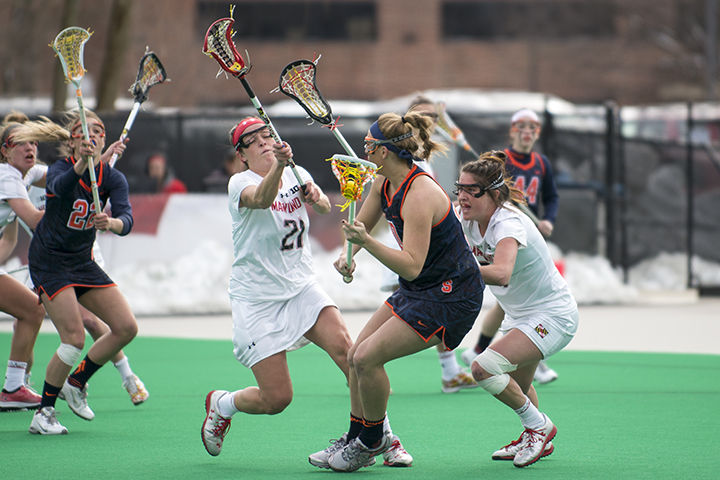 Midfielder Taylor Cummings (21) and defender Shanna Brady (27) collapse on an opponent when the Terps lead Syracuse 7-3 at the Field Hockey and Lacrosse Complex on March 7, 2014.

Midfielder Taylor Cummings (21) and defender Shanna Brady (27) collapse on an opponent when the Terps lead Syracuse 7-3 at the Field Hockey and Lacrosse Complex on March 7, 2014.

This past weekend, Cummings and Mercer took the field and saw many of the players they battled during the season. This time, though, everyone was playing for the same team.

The two seniors participated in the U.S. Lacrosse Women’s National Team training camp from July 31-Aug. 2 at Delaware, polishing their games and developing bonds with players from other schools.

“The thing that our coaches really stress is to connect with each other,” Cummings said. “We’re a group of 36 people who have never really played together before, so to come together for a quick weekend and bond really fast is difficult, but I think we did a pretty good job with that.”

Though Cummings and Mercer were the lone current Terps on the roster, several alumnae participated, including former attackers Brooke Griffin and Alex Aust, and midfielders Kelly McPartland and Katie Schwarzmann.

But the U.S. coaching staff encouraged the players to branch out.

At one point, the coaches paired players with a teammate they didn’t previously know. After learning about their partner, the players had to introduce each other to the team and share something unique about them.

Cummings teamed with former North Carolina defender Sloane Serpe, who graduated in 2014, one season after defeating Cummings and the Terps in triple overtime in the national championship. Many other Terps worked with North Carolina and Syracuse players, too.

“What’s awesome about that is on the field when we play for our respective teams, we do play hard and we do have a good rivalry going, but when we come together for [the] U.S., team feelings don’t really matter,” Cummings said. “[We’re] trying to, I guess, get to know the former enemy, now teammate.”

In addition to building new relationships, Cummings and Mercer had to acclimate to a different playing style.

Mercer, who was not available for comment, had to adjust to the U.S. team’s high-pressure defensive style.

“We have a [joke] with the coaching staff that when Alice is playing that style, it’s almost like she’s hunting prey and going after her opponent and dictating where they’re going to go and what they’re going to do,” U.S. coach Ricky Fried said. “Watching her play out of her comfort zone is very refreshing because not everybody is able to do that.”

Fried credited Cummings’ leadership skills, citing her competitive drive as an asset to the team. Her work ethic was infectious for teammates, Fried said, especially after they made friendships off the field.

By the end of the week, Cummings was friends with her roommate, Madison Crutchfield from Duke, and she ate meals alongside Syracuse attacker Kayla Treanor.

Cummings and Mercer have spent hours game planning and playing against many of the U.S. players over the years. But with the July camp behind them, Cummings is seeing her rivals in a new light.

“We respect each other so much as players on the field, and to get to know them off the field and get the chance to play with them is awesome,” Cummings said. “You know, I’d rather play with them then against them.”