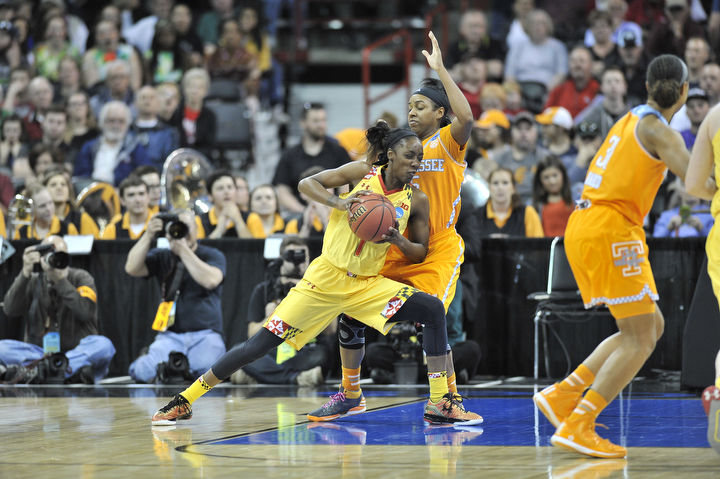 SPOKANE, Wash. — Guards Shatori Walker-Kimbrough and Laurin Mincy sat at the podium Monday after the Terrapins women’s basketball team’s Elite Eight win with the two cut-down nets donned around their necks. Guard Lexie Brown had her regional championship hat on backward with a slice of the net tied around the adjustment strap.

The celebration wasn’t an hour old, but the reporters staring at the players were already looking ahead to a Final Four matchup with No. 1-seed Connecticut, the overwhelming favorite to take home the title. So each player fielded a question about the matchup set for Sunday night in Tampa, Florida.

“UConn is a force to be reckoned with, so we got to lock in and prepare for them,” Brown said. “They’re an incredible squad, and they have an incredible coach in coach [Geno] Auriemma.”

“We’re going to just throw everything at them that we can,” Mincy said.

Connecticut has bulldozed its way through the first four rounds of the NCAA tournament, winning by an average of 41 points.

After the Terps ended No. 4-seed Duke’s season in the Sweet 16 on Saturday, Blue Devils coach Joanne P. McCallie said the squad wouldn’t have a chance against the 36-1 Huskies. She said they are unbeatable.

Tennessee coach Holly Warlick, however, thinks the Terps have a chance to end Connecticut’s quest for a NCAA-record 10th national championship.

“Maryland has a great shot. They got kids that can hit outside shots,” Warlick said. “They have got the staff and the players to challenge UConn. I mean, they have lost two games all year. So I think they have that ability to give it a run. I really do.”

A game after Tennessee went 21-for-22 at the free-throw line, the Terps limited the Lady Volunteers to one attempt from the charity stripe. Tennessee leaned on its ability to get to the line in overtime against No. 11-seed Gonzaga in the Sweet 16, when all 10 of its points in the extra period came off free throws.

Monday, though, the Terps forced the Lady Volunteers to knock down shots from the field instead of giving them chances to chip away at the line. Coach Brenda Frese said a primary reason was their lack of aggressiveness after forward Bashaara Graves had to sit with foul trouble.

“They went to more of a perimeter-oriented attack — four out, one in,” Frese said. “That kind of played into them not being able to get to the free-throw line as much.”

Warlick, meanwhile, expressed her dissatisfaction with her team’s trouble earning trips to the line. She declined to comment on the officiating after the game.

“We threw the ball inside,” Warlick said. “We penetrated. We did everything we could do except go to the free-throw line.”

The last time Frese visited Spokane, Washington with the Terps was in 2008 during the NCAA tournament. Less than two months after giving birth to her twin sons, Tyler and Markus, she led the top-seeded Terps to an Elite Eight appearance before falling to No. 2-seed Stanford.

Seven years later, Frese headed back across the country, this time with her husband, Mark Thomas, and her sons supporting her behind the sideline. When the bench flooded center court after the Terps’ win over Tennessee, Tyler and Markus, clad in their No. 25 jerseys, joined in on the celebration with the players.

Brown and Walker-Kimbrough, both sophomores, garnered recognition from The Associated Press on Tuesday. Brown was named to the All-American third team, while Walker-Kimbrough earned honorable mention.

Both players are averaging more than 13 points per game this season and were named to the All-Big Ten first team earlier this season.

The recognition for Walker-Kimbrough comes a day after she was named the Spokane Region’s Most Outstanding Player for her combined 36 points in the two wins that helped send the Terps to the Final Four.