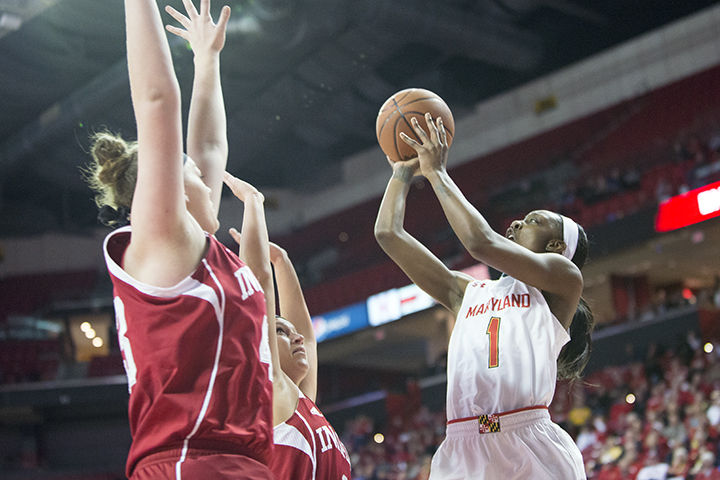 Guard Laurin Mincy rises up for a shot during the first half when the Terps lead Indiana 47-35 heading into halftime in Xfinity Center on Feb. 23, 2014.

Guard Laurin Mincy rises up for a shot during the first half when the Terps lead Indiana 47-35 heading into halftime in Xfinity Center on Feb. 23, 2014.

Laurin Mincy was headed toward a career high on her Senior Night, but she didn’t know it.

With less than three minutes left against Indiana, the Terrapins women’s basketball guard stepped behind the three-point line and let a high-arcing shot soar toward the rim. The ball swished through the net for her fourth 3-pointer of the game to give her 26 points on the night, surpassing her previous best of 25 set against Delaware in 2011.

Mincy finished her final regular-season game at Xfinity Center with a career-high 28 points to lead the No. 5 Terps to their 20th straight victory in an 83-72 win over the Hoosiers. The win finishes off an undefeated 15-0 regular-season record at home.

“I didn’t have a Senior Night in high school, so obviously, I wanted to come out here and play hard,” said Mincy, who missed her final high school season after tearing her ACL. “I had a lot of family, friends and fans here, so I wanted to go out with a bang.”

Before the contest, the Terps (26-2, 17-0 Big Ten) honored their lone senior with a video tribute, and the veteran received a standing ovation from an announced 5,601 in attendance. And the fans cheered Mincy on all night long, growing a little louder with every basket she made.

Mincy finished 7 of 14 from the floor and sunk 10 of her 12 free-throw attempts. Coach Brenda Frese played her all 40 minutes for the first time since 2012, too.

“That was all Laurin,” Frese said. “She never looked tired.”

After battling back from ACL tears in both of her knees — one in high school and one five games into her junior year — Mincy has put together her best season with the Terps. She entered Thursday’s bout second on the team in scoring at a career-best 13.3 points per game.

The New Jersey native surpassed her season average in the first half alone. On the Terps’ final possession before the break, guard Lexie Brown penetrated the defense and kicked the ball out to Mincy, who drilled her second 3-pointer to give her 15 points.

“We cautioned our kids that there was probably a good chance that she was going to try to have an extra-special night in front of her family and friends,” Indiana coach Teri Moren said. “She is a tremendous player.”

Even without an answer for Mincy, Indiana (14-14, 4-13) hung tough all night. When the Terps tied their largest lead of the night at 16 points with 13:41 left, the Hoosiers responded with hot shooting from behind the arc to cut the deficit to four.

Center Malina Howard, who set a new season high with 16 points on 7 of 10 shooting, responded with a layup at the other end to stop the run, though.

“In the back of my mind I knew that this game was for Laurin,” Howard said. “It’s been an emotional week, knowing it’s Senior Night, when you have a someone who has been here with you for three years and that you care about a lot. I just wanted to play as hard as I could.”

The Hoosiers wouldn’t get any closer after Howard’s layup, and Mincy poured in eight more points after the bucket to push the Terps to within one game of finishing off a perfect campaign through the Big Ten.

It hasn’t been easy road for the fifth-year senior, but with the spotlight shining on her, Mincy put together one of her best performances.

“Often times, young people any more don’t want to fight through tough times,” Frese said. “She put her head down, and she went to work, and she battled and will always have a special place in my heart because of that.”