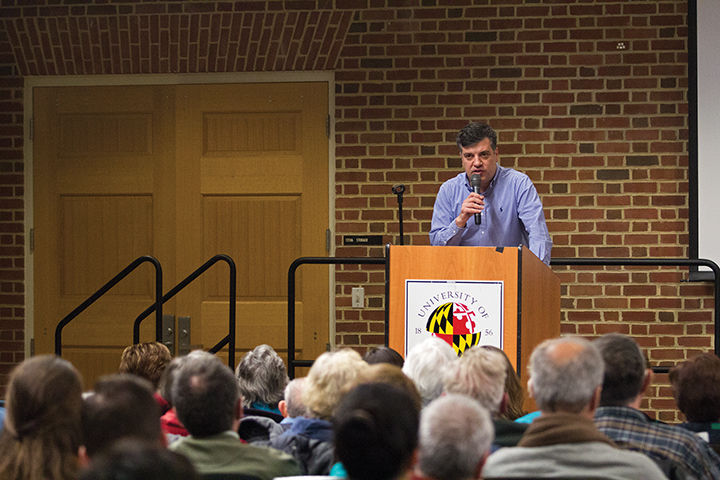 Sayed Kashua is an Israeli-Arab author and journalist who spoke in the Prince George's room in the Stamp Student Union and showed an episode of his show "Arab Labor" on Wednesday, Feb. 25, 2015.

Sayed Kashua is an Israeli-Arab author and journalist who spoke in the Prince George’s room in the Stamp Student Union and showed an episode of his show “Arab Labor” on Wednesday, Feb. 25, 2015.

When Palestinian citizen of Israel Sayed Kashua moved his kids from their Jewish schools in Jerusalem to a public school in Champaign, Illinois, it surprised him the school’s registration forms had no race option for Arab, Jewish or Israeli.

He asked an official which race he should be identified as, and she told him to say he is white.

“I cannot really relate to home as a safe place,” Kashua said. “And I didn’t want [my kids] to feel just like me, that they should always be ready to lose their home. It’s really very difficult when it comes to kids.”

Kashua, a writer and author best known for his satirical Hebrew column for Israeli newspaper Haaretz, spoke to a crowd of about 80 community members and University of Maryland students and staff Wednesday night in the Prince George’s Room at Stamp Student Union. During a discussion presented by the Gildenhorn Institute for Israel Studies, the creator of the Israeli TV show Arab Labor discussed challenges he has faced living and writing as an Arab in Israel.

His writings and television show often address issues Arabs face with identity, rights and discrimination in Israel, but in a humorous and relatable way. He said the only way to bring an Arab story to mainstream television in Israel is to make it funny, but he felt like he was constantly being closely watched or judged.

Kashua’s discussion began with an episode of Arab Labor, in which the show’s main character, Arab-Israeli journalist Amjad Alian, is dealing with his daughter’s identity struggles attending a Jewish school in Israel as an Arab. Kashua said he has faced similar struggles living in Israel.

“I’m a Palestinian citizen of Israel and a major part of the education system is nationality,” Kashua said. “I’m not sure the word ‘Palestine’ was even mentioned until I was in the 9th grade, so all the stories [about Palestinian heritage] I know are from my grandmother.”

Kashua said his grandmother inspired him to become a storyteller. He said she used to tell him about the “awful war” of 1948, when his grandfather was killed and his family lost their land.

Kashua explained that Palestinians live as refugees inside Israel, culturally and nationally, and are rejected as citizens in all aspects of life.

Despite being born in Israel and having lived most of his life there, he said Israel still belongs more to Jewish people than to Arabs, though they are citizens in the same state.

Kashua eventually moved with his family to the U.S. last summer.

Senior Cara Hamel said it was interesting to hear Kashua speak considering he has such a complicated identity.

“I really loved it,” the fire protection engineering major said. “He has an ability to speak about something that is, for many people, so sensitive, in a way that is comfortable and funny.”

Amalya Sherman, a junior studio art major, said she came to Kashua’s talk because she often struggles with understanding and accepting Israel’s history, as well as how complicated the current situation is there. She said as a Jewish student, it was validating to hear from someone else who has lived there.

“And, you know, he left,” Sherman said. “I feel like there must be a solution besides leaving, but no one has come up with it.”

Kashua said he misses his home in Israel and will likely go back one day, but is not hopeful anymore that the Arab situation in Israel will change.

He said he might bring his TV show’s main character to Illinois, because he has lots of stories to tell. For example, he said, after coming from Israel, all the corn fields are “really fascinating.”