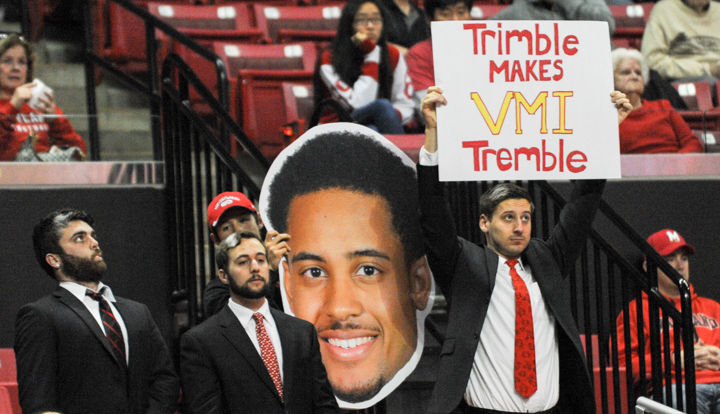 The Turgeonites brought signs to support the team when Terps defeated the VMI Keydets 95-77 in Xfinity Center on Nov. 30 2014.

The Turgeonites brought signs to support the team when Terps defeated the VMI Keydets 95-77 in Xfinity Center on Nov. 30 2014.

The six of them only sat for a brief moment during the under-16 media timeout during Wednesday night’s Terrapins men’s basketball game at Xfinity Center.

Then, one by one, the Turgeonites began to rise. The timpani cadence made famous by 2001: A Space Odyssey played from the stadium speakers in the background. The video board showed a hype video.

Behind the opposing basket, two giant state flags unfurled down the wall of students, who were poised to explode once the familiar beat of “Turbulence” dropped.

“Watch out for elbows,” said Ramin Ziaee, one of the Turgeonites. “This is when we go a little crazy.”

Ziaee, a senior management major, is one of seven members of the Turgeonites, a group that strives to serve as catalysts for Terps men’s basketball fans. Every home game, the group stands behind the Terps’ bench in the seats of Section 102, Row 7, dressed in suits in an attempt to mimic coach Mark Turgeon.

Sam Laiacona, a junior bioengineering major, was sitting right behind them during Wednesday night’s game, a six-point victory over Penn State.

“Their enthusiasm definitely rubs off on me,” Laiacona said. “When Maryland’s on defense, the crowd is usually not as into it, and they really get everyone else going.”

With every dribble, the Turgeonites bounce up and down as if on pogo sticks in efforts to rally those around them,including the parents of some Terps players.

Forward Evan Smotrycz’s parents, Zee and Charleen, were among family members seated a row in front of the group.

“The energy they give to this team — I love them,” Charleen Smotrycz said. “No other team in the Big Ten has a group like this.”

The Turgeonites’ uniqueness is one of the many reasons they’ve begun to receive more media attention.

On Wednesday, they’ll film a segment for the Big Ten Network’s The Journey, a documentary-style show that takes an inside look at stories within Big Ten athletics. The group has also been contacted by The Washington Post Magazine and recorded a radio spot for Terps broadcaster Johnny Holliday.

But, that’s not the only time the Turgeonites can be heard on Holliday’s call. Mike Duberstein, a senior communication major, said he’s received texts from friends who can hear him screaming on the air during opponents’ free-throw attempts.

With the increased exposure, it’s not uncommon for fans of both teams to take pictures of the suited bunch, and spectators often want to include the Turgeonites’ sign in the snapshot.

Against Penn State, the group brought a blown-up picture of the Terps football captains refusing to shake hands with the Nittany Lions during this year’s football season. With the photo was the text, “Don’t expect a handout.”

There wasn’t attention on the Turgeonites that time, though.

When the group first started out four years ago during Turgeon’s first season with the Terps, some onlookers didn’t understand what then-juniors Jamie Morris and Cory Frontin were doing. Justin Sawyer, Morris’ cousin, certainly didn’t.

“When my cousin started it, I was at the game across the stadium,” said Sawyer, a senior marketing and supply chain management major. “I looked across and wondered why they were in suits.”

Sawyer is now a member of the Turgeonites and has helped continue the traditions the first group started.

Throughout the game, the Turgeonites mimic the moves of the Maryland Dance Team — usually unsuccessfully — in an attempt to keep the crowd excited during timeouts.

They also don sweatbands and run through choreographed calisthenics during the “Get Active” cam.

When the buzzer sounds, the suits and ties don’t immediately come off. After the Terps’ last-second win against Northwestern, the Turgeonites went to Looney’s to celebrate along with many other Terps fans.

But once the craziness settles and the energy from the game subsides, it’s back to reality for the seven men behind the Terps bench.

“We’re Turgeonites during the game,” said Nick Riddlesberger, a senior management major. “But afterwards, we’re students and fans just like everyone else.”