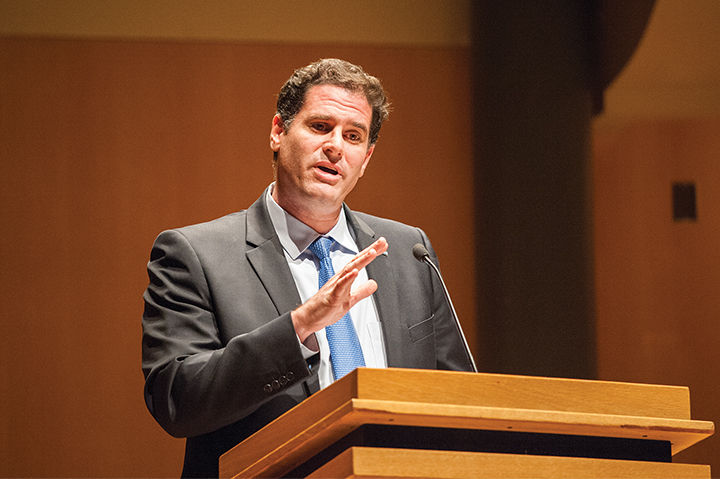 Ron Dermer, Israeli ambassador to the U.S., delivered a speech and answered questions Wednesday amid both support and criticism from about 250 students and faculty gathered at the Clarice Smith Performing Arts Center.

Dermer, appointed in July 2013, focused his speech on three aspects of Israel that he said make the nation unique: its small size, unique political culture and citizens’ “deep sense of solidarity.”

He said Israel, when compared to larger nations, is much more vulnerable to military threats because of the nation’s small territory. That small size allows airports, urban areas and strategic locations to be threatened, an issue not faced by other nations such as the U.S., he said.

Israel’s size, he said, also makes it more susceptible to its neighbors, the majority of which create problems for the nation.

“When you’re blessed with Canada in the north, Mexico in the south and fish as neighbors, you can afford mistakes,” he said. “Israel can’t because we have 100,000 rockets pointed at us.”

Several students then stood up and held signs with statements such as “End Military Aid to Israel,” and “End the Occupation and ALL Settlements.” They were escorted out, along with another group on the upper balcony level.

Dermer continued his lecture. He said he believes Israel’s political system is dysfunctional and an indication of its instability. Instead of voting for candidates in elections, he said, citizens vote for a party, and the percentage of the vote each party gets is proportional to the number of seats it receives.

“In America you have Hollywood and politics, but in Israel you have politics and that is our Hollywood,” he said. “I hope Israel reaches prosperity so one day our politicians aren’t our celebrities.”

Dermer also said the strong ties between Israelis create a bond unparalleled by any other nation. That deep connection, he said, comes from past injustices.

“Imagine a 9/11 every day for a century, and that is what the Holocaust was like for the Jews,” he said. “So that’s why we don’t take threats lightly.”

The deep solidarity isn’t just found among Israelis, but between citizens and the Israeli Defense Force as well, Dermer said.

Audience members also asked about Iran’s nuclear program and the skyrocketing cost of living in Israel.

Noa Zarka, a freshman enrolled in letters and sciences and an Israeli citizen who hid in the nation’s bomb shelters this summer, said it’s important for Israelis to lead the discussion about the nation’s issues because they have lived through them.

“You don’t really know what’s happening in Israel until you live the reality,” Zarka said.

David Snyder, a freshman aerospace engineering major, attended the event because he said it was timely and he thought it would be informative..

“It’s very interesting to get the perspective of such a powerful person on such a compelling issue,” Snyder said.

Despite the issues that might plague the nation, Dermer said unique connections found within the nation make it special.

“Israel is the most exciting place on Earth because we are all strapped into this roller coaster ride,” he said. “We have a shared past, a shared present and a shared hope for a brilliant future.”

Due to a reporting error, a previous version of the article stated there were about 50 people in attendance. That number has been changed to 250.