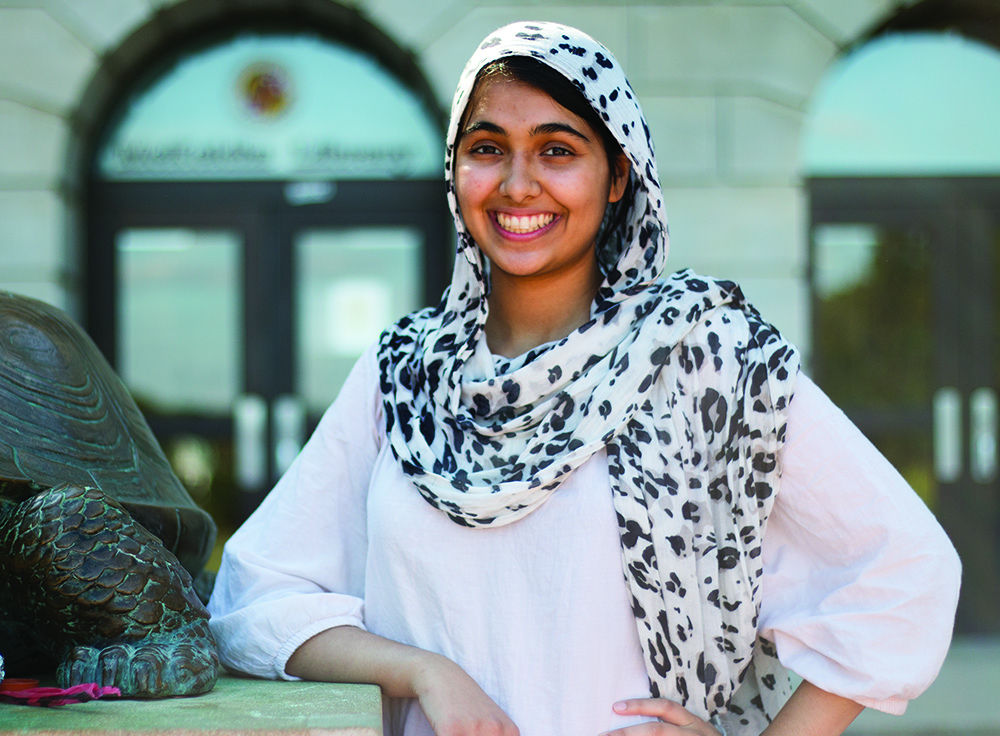 Shabnam Ahmed, a sophomore enrolled in letters and science, worked to stop the ballot initiative that would extend county council and county executive term limits from two four-year terms to three in Prince George's County.

Shabnam Ahmed, a sophomore enrolled in letters and science, worked to stop the ballot initiative that would extend county council and county executive term limits from two four-year terms to three in Prince George’s County.

On Nov. 4, Prince George’s County voters will decide whether to extend the term limit for county executive and council positions from two terms to three.

If university student Shabnam Ahmed has things her way, that extension won’t happen.

Ahmed, a sophomore enrolled in letters and sciences, established the online “No Three Terms” initiative, with a website and Facebook page designed to increase awareness and galvanize opposition to “Question J.”

The movement, she said, stems from her time as Student Member of the Board of Education for the Prince George’s County in high school, where she had a first-hand view of county politics.

“The experience opened my eyes to the system and showed me how much influence an official can have,” Ahmed said. “The reality is that a lot of politicians go into office and start feeling entitled to their seat. They stop serving the population they were elected by and it becomes like a career for them.”

The effect, she said, is a sort of “regime” in politics, which prevents fresh ideas and distances the official from the population he or she was elected to serve. Should Question J pass, Ahmed fears the issues would become more pronounced over officials’ potentially longer stay in office.

The referendum question’s appearance on the ballot follows its unanimous approval by the county council, which based its decision on a recommendation from the Charter Review Commission.

County Executive Rushern Baker III and representatives on the county council selected the members of the seven-person commission, which was led by retired judge William Missouri and former councilwoman Camille Exum.

The commission cited a survey of surrounding jurisdictions as well as consultation with the Maryland and National Associations of Counties as deciding factors in its recommendation, Exum said.

Exum wrote in a statement: “The commission believes that it is in the interest of democracy and voter empowerment to move away from term limits and recommended adding a third term as an intermediate step.”

According to The Washington Post, Prince George’s is the only county in the Washington metro area that caps the time an elected official can spend in office — a restriction that dates back to 1992. In 2000, voters decided to keep the term limits in place, and in 2004, an amendment to create two new county council seats with no term limits was rejected.

To Ahmed, the history of the movement displays constituents’ desire to limit the time officials can spend in office.

“This question was sort of proposed by county officials, and it’s suspicious to me that they would advocate it for themselves,” Ahmed said. “A movement like this should be coming from the general population, if anything. I don’t think it’s what the county wants.”

Through her website and social media advocacy, Ahmed hopes to educate people on the subject, keep them up to date and reach out to other activist organizations.

Since she created her initiative, Ahmed has been in contact with about five smaller groups similarly advocating against term limits, in the hopes they could somehow coordinate their efforts.

One group, the South County Economic Development Association, is headed by James Dula, who said he reached out to Ahmed after seeing her efforts.

“I’m very much in agreement with Miss Ahmed’s point of view. She is a remarkably insightful and courageous young leader,” said Dula, the association’s president and CEO. “Eight years should present any one person with enough time to represent the people with energy and enthusiasm. More than that will offer special interest groups the opportunity to sway opinions and build unethical relationships.”