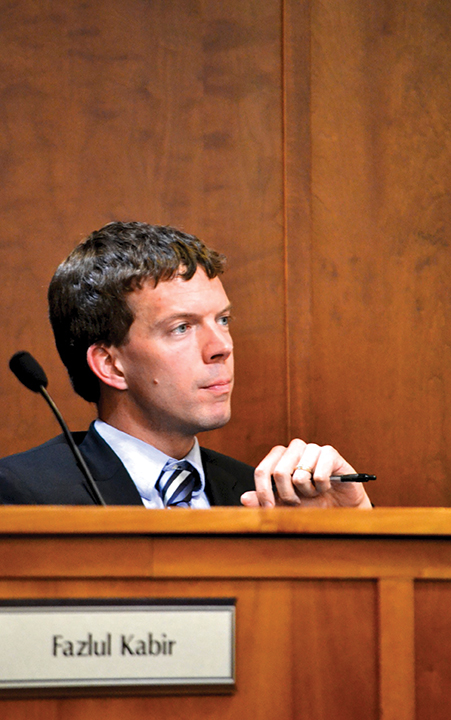 City officials requested few changes to the city manager’s draft budget for the 2014-15 fiscal year after a marathon meeting Saturday.

The overall amendments to the city manager’s proposed budget were “fairly conservative” because the city is in its second year of low property value assessments, District 1 Councilman Patrick Wojahn said, meaning homes and properties in the city have been assessed as worth less on the housing market than in previous years.

“It’s very difficult for us to take on any major initiatives right now that require funding,” Wojahn said.

Among the more costly approved additions to the budget are $30,000 set aside for a city lobbyist, $25,000 for an animal shelter feasibility study and $20,000 for a security camera near the College Park Metro Station. Money from the city’s reserve funds will support these changes.

“This is a challenging fiscal year for us,” Wojahn said. “There are a lot of things that we would like to work on in the city right now, and I think we are managing to push some of those issues forward.”

Wojahn said many residents expressed concerns over the existing animal shelter’s high kill rate. The feasibility study is the first step to ensuring a no-kill policy in which only animals that are unlikely to survive would be put down.

Mayor Andy Fellows encouraged the council to consider budgeting for a city lobbyist, something he had hoped to accomplish in the 2013-14 fiscal year but was unable to.

City staffers have been assigned to follow certain legislation in the past, but Fellows said having a lobbyist specifically devoted to advocating for College Park would benefit the city.

District 1 Councilman Fazlul Kabir said this year’s budget was easier to form because the council did not have to raise taxes.

In place of increasing property tax revenue, the council is expecting additional revenue from the admissions and amusement tax as the university moves to the Big Ten, Kabir said. The proposed budget also indicates that officials want to increase income tax by 8.8 percent.

The city is also buying into the Maryland State Retirement and Pension System, which will provide a fixed-benefit pension for city employees. This would cost the city about $575,000 for the next year, and Wojahn said that since the recession, other municipalities have been struggling to meet the obligations of their defined benefit plans.

“There was a concern that [city employees] weren’t saving enough for retirement,” Wojahn said. “[But] since the recession, a lot of local governments have moved away from defined benefit plans because a lot of municipalities have been struggling with meeting the obligations of their defined benefit plans.”

Before the budget is adopted on July 1, there will be a Budget Town Hall Meeting on April 23 from 7 p.m. to 9 p.m. at Davis Hall on 51st Avenue north of Route 193 for city residents to ask questions about the proposed budget and offer feedback.