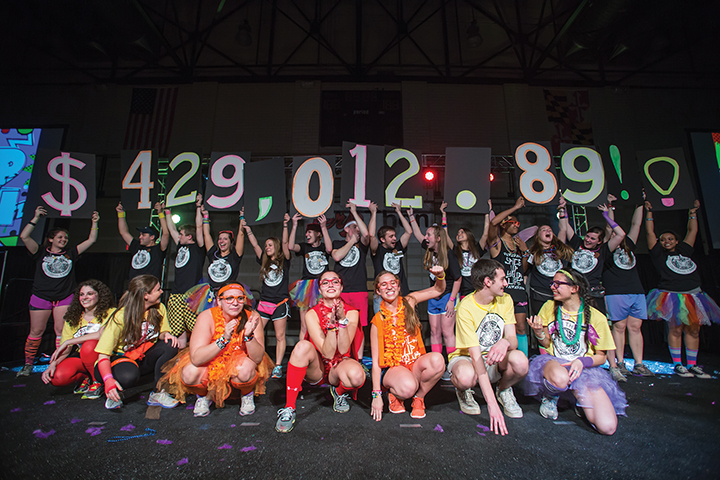 The Terp Thon dance marathon was held in Richie Coliseum on Saturday, March 8 from noon to midnight and raised $429,012.89 for Children’s Miracle Network Hospitals in Washington.

“You all need to buy fanny packs or get one somehow.”

It was Feb. 6 in the basement of Jimenez Hall – four weeks before Terp Thon.

Fifteen people sat in a small room on couches and around tables, some sporting gray sweatshirts with the words “MORALE” splayed across them in black lettering. Their job was easier said than done: pumping up the dancers for 12 hours and ensuring those people never sit down.

William Evans – whom everyone calls Rock – is a senior Spanish and biology major. As the morale committee chair, he leads the dancers and embodies the spirit of Terp Thon — for the kids.

Behind the happiness and energy of Terp Thon — the largest student-run philanthrophic event in the state, according to Executive Director Abby Dickes  — is the story of many families and young patients for whom hospitals become second homes. But the wide scope of Terp Thon starts small in committee meetings, such as this Morale Committee meeting called AHOD (All Hands on Deck).

Evans stood in the center of the room sporting a white sweater, making a list of items to go in survival packs for the dancers.

“What do you think the dancers would need?” Evans asked the room.

Answers bounced back at him as members called across the room: hair ties, gum, tampons, Advil, Band-Aids.

Evans read off the final list and promised to bring all the items to the next AHOD meeting so the members could start assembling fanny packs.

Then he listed logistics for Color Wars, which were kicking off soon and would feature a separate video for each color team.

“I want us to practice not being awkward for the dancers,” Evans said. “Last year, it would be like, ‘Hey, Rock, go get them motivated and stand up,’ I’d be like, ‘OMG, I’m so uncomfortable, I don’t think I can do it.’

“We’re not having any of that this year,” he said.

Dreams came true at Saturday’s fifth annual Terp Thon. Brooke Rosenberg, a 5-year-old leukemia survivor, serenaded the crowd with a rendition of Frozen hit “Let It Go” in a princess dress, while her father accompanied her on guitar. Dickes wore a gold crown. Evans, clad in a Morale shirt that read “Spice Up Your Life,” galaxy print shorts, long socks and fairy wings, danced the Morale dance more than 20 times.

When Terp Thon leaders tried to reserve Cole Field House, the event’s home for the previous four years, they found the space already had been reserved for March 8. Though the executive board was worried that attendance at Ritchie Coliseum, a smaller venue, would exceed capacity — and though it did get close at times — Terp Thon stayed within regulations for the 1,200 people on the floor and about 500 people allowed in the stands, said Fire Marshal Michael Levy.

The climax of the night was the announcement of the total funds raised. Tracy Flack, assistant director for Children’s Miracle Network Hospitals, was the only one who knew the total.

Executive board members stood onstage together at about 11:30 p.m. Saturday night, ready to hold up their posters with the amount on them.

The number was revealed: $429,012.89. It was the highest total Terp Thon had raised and marked its millionth cumulative dollar since the first event in 2010, but it also broke the fundraising record for any dance marathon in its fifth year.

Terp Thon boasts one of the largest volunteer bases of any student group on the campus: 150 volunteers this year.

“We’re kind of definitely going to be at that point next year that we’re going to start having to turn people away, which is kind of exciting and makes it more competitive, so you’re getting the best people,” Dickes said.

Terp Thon is structured like a corporation. At its head is a steering committee, made up of Dickes, External Director Hank Rich and Internal Director Dan Ornstein.

Then there are all the internal and external members who participate in committees. The dancers — more than 1,000 participated this year, Dickes said — round out the event.

The members’ commitment levels range from two to three hours a week for committee members to more than 15 hours weekly for an executive member. Dickes said she puts 40 or 50 hours of work a week into Terp Thon, including answering emails while walking to class.

“It’s a full-time job on top of everything else,” she said.

This year, Terp Thon received about $19,000 in funding from the Student Government Association. Most of Terp Thon’s donations come from sponsorships and nonmonetary donations, said Ethan Wergelis-Isaacson, a 2012 alumnus who was Terp Thon’s external director in 2012.

Children’s National Health System has a budget to help any program that gives money back to it, he said, though Flack said Terp Thon uses very little monetary assistance from Children’s National. (Terp Thon declined to disclose the exact number.)

Terp Thon was founded in 2009 by Matthew Young, a 2010 university alumnus and member of the Sigma Chi fraternity, and Brianna Russo, a 2010 alumna and former president of Delta Phi Epsilon. The organization began fundraising for Children’s Miracle Network Hospitals, which is Sigma Chi’s national philanthropy, Dickes said. The event didn’t happen until 2010 — there was too much planning required for it to happen in just a year, Dickes said — but has raised more money each year.

“We all love kids and we’re all still kids at heart,” said Lauren Mishan, a sophomore secondary education and government and politics major and president of sorority Sigma Delta Tau.

Though Dickes is not in a sorority, she got involved in Terp Thon her freshman year. She eventually worked her way up the organization’s hierarchy, rising from advertising committee captain her sophomore year to events chairwoman her junior year and now executive director.

“It’s 12 hours of bonding with your best friends and it’s a 12-hour dance party, so what’s not to have fun about it?” she said. “But then it’s definitely the kids that really keep everyone coming back.”

The Hsu family house sits on a quiet street in Bethesda, a few blocks from Suburban Hospital. A basketball hoop is in its driveway. Inside is warm, a bright kitchen with photo printouts stuck here and there. Paintings made by the family’s youngest son, Jaiwen Hsu, 15, line the back wall.

A pink box of Georgetown Cupcakes, brought by Flack, sat open in the middle of the dining room table. Jaiwen eyed them.

“He can eat all of them,” Flack said.

“He had his 12th birthday at the hospital and he was really upset, having to celebrate there,” his mother Jeng Hsu said, “but they came, with Georgetown Cupcakes. This is one of his favorites. It’s a huge surprise — just made everything so much nicer.”

The Hsu family has many reasons to be happy — the biggest one is Jaiwen’s health and remission from cancer since 2011.

Jaiwen, then a sixth grader at Thomas W. Pyle Middle School in Bethesda, had been complaining of knee pain for about a week. His mother scheduled an appointment with an orthopedist and told him to take a break from soccer to let his knee heal. On the day of the appointment, Jaiwen felt fine, but his mother said she’d take him to the appointment anyway.

The result was heart-wrenching. Jaiwen had gotten an MRI, which revealed a malignant tumor in his femur. He would have to go to Children’s Hospital in Washington, which his mother said was the best place for treatment for him.

His diagnosis was osteosarcoma, a rare form of bone cancer.

“To be honest, I can’t really remember everything that happened that day,” Jaiwen said. “All I remember is, it was at night. I was scared. I didn’t really know exactly what it meant to have cancer. Cancer was always something that happened to other people, and you felt bad for them, but it really never affected me personally.”

“I remember that I left him and [Jaiwen’s sister Kaiwei Hsu] at the front of the hospital and I went to get the car,” Jeng said, then referencing Jaiwen. “And then Kaiwei told me that, I don’t know if you remember this, but you asked her if you were going to die, and she didn’t know how to answer.”

The hardest part of the night was making phone calls, Jeng said: to her husband, who was out of town, and to her children, who were enrolled at this university.

“That was a Friday, when everything changed,” Kaiwei said.

Kaiwei, a freshman journalism major at this university, spoke in the journalism school’s library four years after she saw her youngest brother undergo a grueling year of chemotherapy, after she watched six inches of his limb amputated, after she saw him receive a prosthesis implant, after his cancer brought her family closer than ever, after he emerged strong and two years in remission.

She is a member of Terp Thon’s hospital relations committee after being inspired to thank Children’s National, the hospital that became her home for a year and that saved her brother’s life.

Jaiwen and Jeng made one thing clear about the year in the hospital: It was tough.

“He had a rough time,” Jeng said. “He was very angry, depressed. He was very moody, everything.”

Jaiwen would rotate from spending a couple of weeks in the hospital to a couple weeks at home. He didn’t mingle much with the other kids, many of whom were much younger. He got close to one of the other patients, a girl, who later died.

“I used to take everything for granted,” Jaiwen said. “I kind of now realize that this could really affect anyone, that there are other people suffering.”

Jaiwen is now a freshman at Walt Whitman High School. He likes science and is part of a business competition team. And he plans on becoming a Terp, just like his siblings and his parents. His brother, Jaimie Hsu, is a senior at this university.

This year is Jaiwen’s third Terp Thon, but he has several shirts from Terp Thon. Jeng said they were all Jaiwen wore to school for a year — “That’s not true!” Jaiwen said. At this year’s Terp Thon, Jaiwen received hugs and gifts from the Terrapins men’s soccer team, including a Crew scarf.

Around the house are subtle reminders of the cancer. Paintings Jaiwen made in the hospital. Words that read, “I cried because I had no shoes until I met a man who had no feet.” The family photo is from when the Hsus were the featured family at the hospital’s Children’s Ball in 2013. On the window is a piece of paper that reads:

“Falling down is part of life

Getting back up is living.”