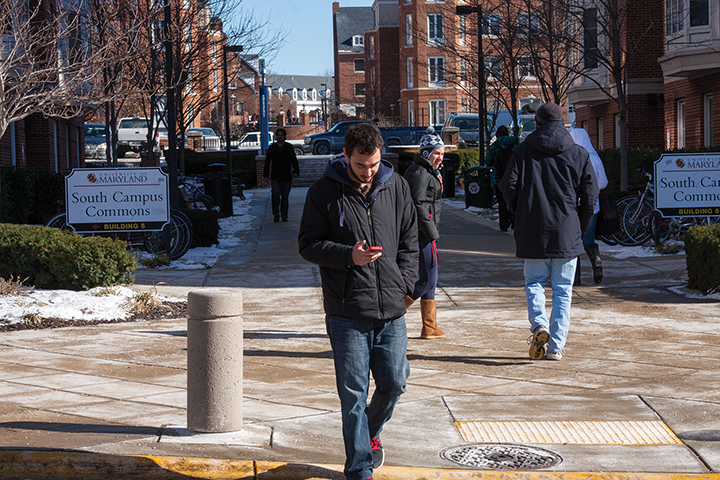 Michael Samuels looks at his cellphone near Preinkert Drive. A Pew Research Center study found most college-aged people have bumped into pedestrians who are using cellphones.

When Nicholas Caviglia drives a Shuttle-UM 104 bus, he said, he sometimes slams on the brakes to avoid hitting students walking across the street as they ignore the crosswalks with eyes glued to their glowing cellphone screens.

“Everyone is kind of distracted these days,” said Caviglia, a senior geology major. “You have to be extra alert.”

A study released by the Pew Research Center in January reported that 53 percent of adult cellphone owners have been involved in a “distracted walking” encounter.

For the college-aged demographic, another number arises — 70 percent of 18- to 24-year-olds have been bumped into by someone who was using his or her cellphone while walking.

Last week, freshman Kirstie Coombs said she narrowly avoided a run-in with a woman who was walking toward her while texting.

“She swerved out of the way at the last minute,” said Coombs, a bioengineering major. “Everybody does it, but I feel like people should definitely look up from their phones more. In today’s culture, people are really into being social on their phones. I know I have friends who can’t put their phones down — even when walking.”

While the dangers of texting and driving have inspired media attention, prevention campaigns and laws forbidding the habit, the less widely discussed custom of using cellphones while walking has also proven hazardous.

A 15-year-old San Diego girl was killed last Wednesday after stepping into the path of an oncoming semi-truck while texting; a woman walked off a pier in Australia in December while checking Facebook on her phone, and a video went viral in 2011 showing a woman falling into a mall fountain while texting.

Cellphone distractions go beyond just texting and checking social media A 2012 study at this university found 116 cases between 2004 and 2011 in which pedestrians were killed or seriously injured while wearing headphones.

Jenni Young, a couple and family therapy graduate student, said she is guilty of distracted walking and notices many around her do it, too.

“When I’m walking around, it’s a little bit of free time between all of the things I do,” she said. “I’m using that time to catch up with friends or read my emails. We live in a world that’s more and more connected through the Internet.”

Bret Snodderly was texting while walking along McKeldin Mall, and when he looked up from his phone, he said his face was inches away from a pole. Despite the close call, Snodderly said he would continue using his phone while traveling between classes.

“I just have to watch out better from now on,” the freshman materials science and engineering major said. “I try to look up between typing words.”

Robert Smith, a senior criminology and criminal justice major, said students should be more aware of their surroundings while navigating a busy college campus.

“They’re really taking their life into their hands when they walk across the street without even looking up,” Smith said. “It’s an accident waiting to happen if you’re not paying attention. I see it every single day.”