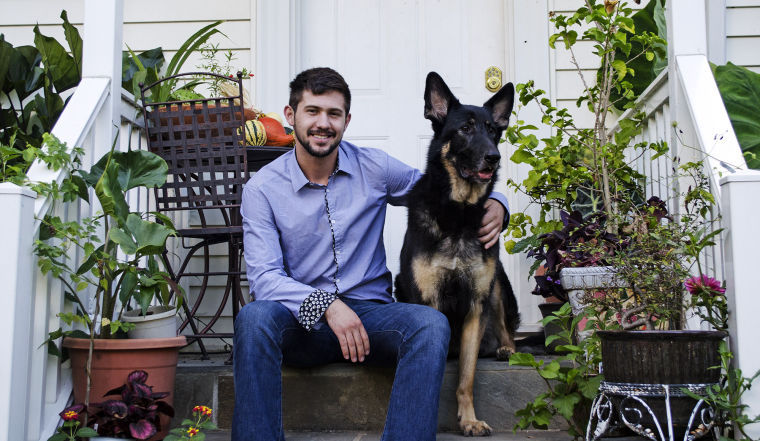 District 1 College Park City Councilman Fazlul Kabir met a different kind of student while knocking on doors during his campaign two years ago.

The student who answered the door was Benjamin Mellman, and now he’s running in the same City Council race as Kabir.

Most students don’t live in the same house year to year or stay in College Park after graduating. But Mellman, who was 21 when Kabir knocked on his door, already owned the house he lives in and now rents it out to tenants to pay off the mortgage. He purchased it in 2009 with money from his grandparents before graduating from Montgomery College in Rockville and enrolling in this university.

The senior aerospace engineering and mechanical engineering major is a character in the community. He keeps bees behind his house and has been at the forefront of a local push to allow College Park residents to raise chickens in their backyards.

Mellman is one of two university students running for a seat on the City Council. Matthew Popkin, a graduate student in public policy, is running for a District 3 seat.

Although he’s running against incumbent residents, Mellman isn’t worried about the competition.

“I’m not really doing an aggressive campaign,” he said.

He has instead taken a relaxed approach to campaigning. It’s partly because of his heavy course load and partly because that’s just who he is, Mellman said. He meets residents while walking his dog, Cayley, a gigantic German shepherd mix, through the neighborhood. He has also ordered some lawn signs, which he said should come in this week.

While his campaign strategy may be more casual, Mellman isn’t new to the local political scene. After his first encounter with Kabir, the incumbent helped the student get a position

on the College Park Committee for a Better Environment, which Mellman now co-chairs.

Through his work with the committee, Mellman has been pushing to bring chicken-rearing to the community. His mother raises chickens at her Silver Spring home, and after seeing how it brought her neighbors closer, Mellman said he’d like to see a similar tight-knit community in College Park.

“I think our city is a little too geared for students and not for residents,” he said.

He would like to see more privately owned businesses and development that would keep residents and visiting families in the city instead of going to Washington for a night out.

Though he considers himself a resident, Mellman is still a student, and after he graduates in the spring, he hopes to stay in College Park to complete a doctorate. With a foot in both camps, he said it’s difficult to take sides in the clash between students and residents. But he hopes his unique perspective can help to “bridge that gap.”

Win or lose in November, Mellman said, he wants to work to improve the city. He doesn’t have a fleshed-out platform so much as a list of priorities, such as sustainability and community.

“If people want me to [work on City Council], I’d love to. I love this city,” Mellman said. “I believe it could be a lot more than it is right now, and I’d love to work to try and make a change.”

Both his opponents in District 1 said they are happy Mellman chose to run.

“It’s a good thing to have more candidates,” said Kabir. “It’s an opportunity for each of us to talk about our own issues that are important to us.”

Patrick Wojahn, the other District 1 incumbent who has grown friendly with Mellman over the past two years, also said he’s happy the race is contested and that students bring a fresh take to the table.

“It’s great that a student at such a young age is already as involved in the community as he is,” Wojahn said. “Whether there’s a student on the council or not, I think it’s important to have a student voice about the issues affecting the city.”