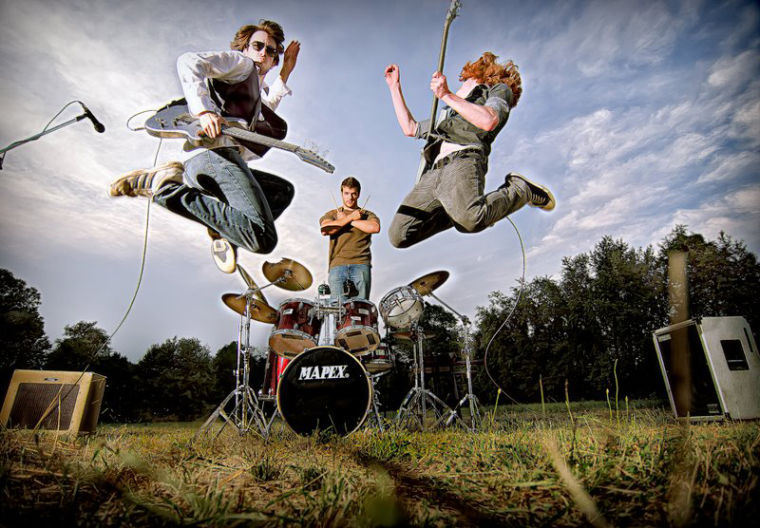 Over the past eight years, the Roberts brothers have played on prestigious area stages, from the 9:30 Club in Washington to Baltimore’s Bourbon Street.

But for university engineering graduate student and band member Luke Roberts, his favorite performance was at Flat Tuesdays, a small pub on the University of Maryland, Baltimore County campus.

“The place was packed,” Roberts said. “There were people all over the floor, balcony and even the staircase. The most powerful moment was when we played ‘Hallelujah,’ and the crowd began to sing so loudly that I actually heard them over myself. I get chills just thinking about it.”

Band of Brothers, which consists of brothers Michael, 19, Luke, 23, and Daniel, 25, would much rather touch people with its music than merely gain fame.

“We seek to create the deepest artistic expression of the human experience through music, make something beautiful, give others hope, and let them know that they are not alone,” reads a statement on their website, mybandofbrothers.com.

That is not to say they have not had success, though. They’ve earned a modest profit selling songs on iTunes and posted their first music video — a recording of Luke performing “Her Heart’s Lips Have Kissed My Soul,” a song he wrote — to YouTube on May 9. It’s nearing 5,000 views in its first four weeks on the video-sharing website.

The brothers plan to release a video once a month, featuring either an original song or a cover.

They got a taste of fame when Luke won the YOBISing Singing/Songwriting Contest and a trip for two to the 2011 Grammy Awards.

Their song “Turn Me Around” won them the honors in their second year competing in the contest. They didn’t win the first year they entered, but their song was automatically re-entered the next year.

“I had forgotten about the contest by the time all of the finalists were announced,” said Luke, who sang the song. “It had made it through a month of voting before I started to urge my friends to vote, and eventually was declared the winner.”

The night of the Grammy awards, Luke and Daniel rode up to the red carpet in a limousine and rubbed elbows with stars such as Bruno Mars, Ryan Seacrest and Pauley Perrette.

“There were things that were very inspiring about the experience, and some that were not,” said Daniel, a Howard High School music teacher. “It was very shiny, glamorous, and polished, but also very business-heavy. Like a sugar high, it’s exciting at first, but it can wear on you.”

For now, the brothers stick to their local events around their busy schedules. Michael, the youngest, is an undergraduate student at UMBC studying mechanical engineering, and Luke occupies his time building robots, including the breakthrough “Robo Raven” that recently made headlines, at this university.

“So many bands have a shot to make it big, and it’s a lot about who you know,” said Michael Criscuoli, a longtime friend and senior journalism major. “But they all have futures in other things that they can fall back on if it doesn’t work out.”

The band’s biggest fans are more than happy to have them performing locally. Fan Hannah Lebo found Luke’s ability to sing while playing the keyboard and drums at the same time mesmerizing.

“It’s not just that the music is really good, it’s also the amount of energy that they have on stage,” said Lebo, who first met Luke while he was an undergraduate student at UMBC. “I didn’t go at first, but when I did, I got hooked. Any one of them can play a number of instruments, and each has his own distinct style of songwriting. Everyone who goes to a show wants to go to another one.”

The Roberts brothers have also created their own record label, Ivystone Records, to aid in distributing their music in the Internet age. That allows them to have more control over their own music than they would through a corporate record label, Daniel said.

“Artists nowadays have to become successful before getting signed to a major label,” he said. “With innovations in technology, you can achieve success on mediums like Facebook, SoundCloud and iTunes without being signed.”

Alexi Charalambides, a former teaching assistant for Luke, said the label was a smart and not unexpected move for the brothers, who show signs of being savvy businessmen as well as musicians.

“In my mind, their future has a better chance this day in age than ever before to become popular, thanks to social media,” Charalambides wrote in an email. “The quality of their music just makes it a matter of when, not if.”

Daniel will make a three-week visit to Nashville this summer to learn from esteemed bass player Victor Wooten, and then the brothers will continue to perform live. Their upcoming plans include opening for The Volunteers, the Army’s premier touring band, at Ft. Meade on June 6.